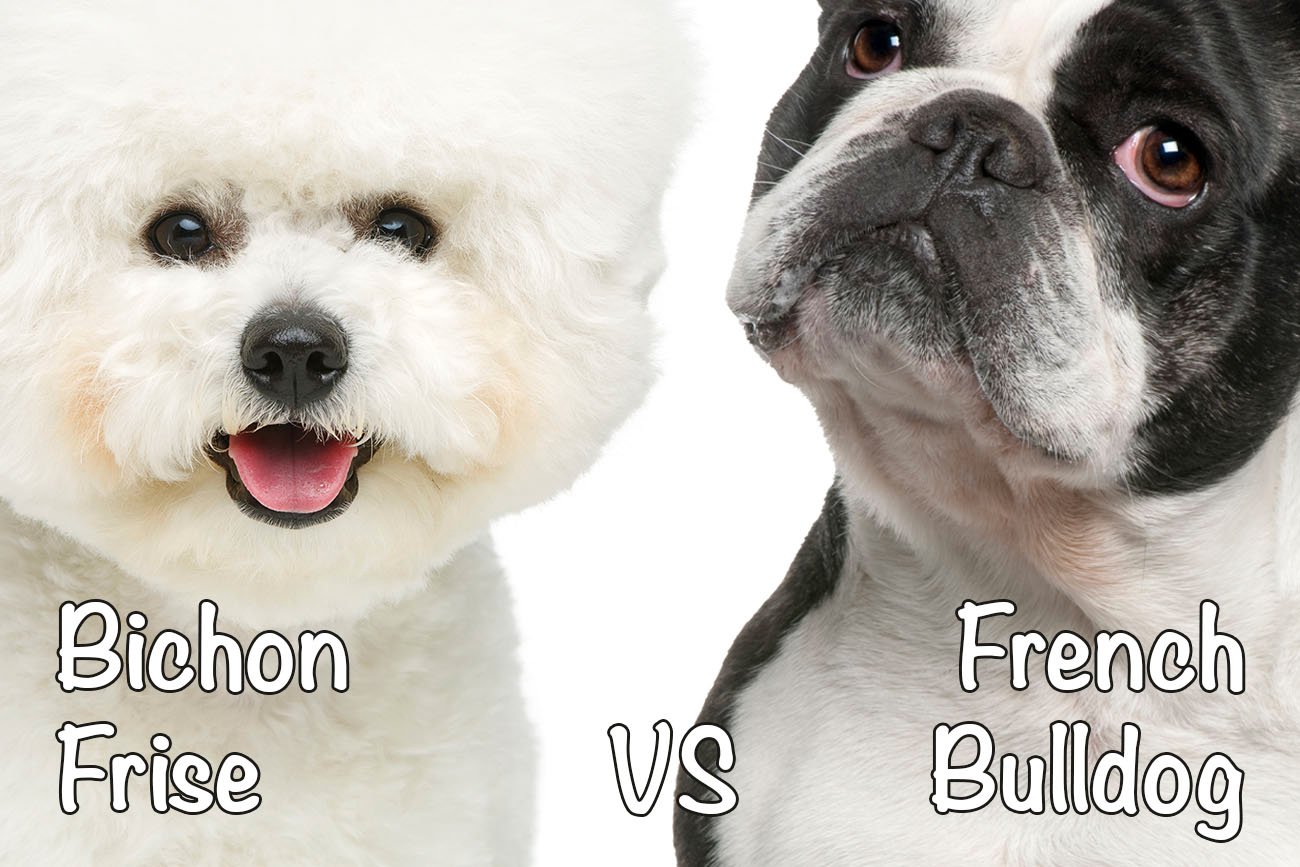 Are you looking for a smart and loving lap dog but are unsure which one to get? Both bichons frises and French bulldogs are excellent companions, but there are a few main differences between the two.

Let’s see what you should expect from them, so you know which one will be the perfect companion for your household.

There is a general lack of consensus as many people track the origins of bichons frises back to Spain and France for most of history, while others claim it first appeared in Italy. Since the 16th century, it has been a breed associated with nobility and royal families. It is one of the seven bichon-type dogs.

At the same time, the French bulldog actually originated in England and it was bred as a smaller version of the bulldog. When the English lace workers emigrated to France, they brought the dog with them. Since then, the French bulldog has become a beloved breed both in Europe and America.

The fluffy bichon frise is a small breed with a plushy, curly look and a longer coat than a French bulldog. Its head hair is rounded, and it has witty, black eyes. Bichons frises are typically white, but different combinations may be available, too, including apricot and cream, especially for puppies.

The French bulldog stands out from the crowd due to its large, bat-like ears, which are the trademark feature of this breed. It resembles a full-sized bulldog with a large and square-shaped head, a short nose, and a heavily wrinkled face. The bulldog has a muscular, robust body, and its short coat color varies from white to cream, farm, and may have different markings, including white or black.

In terms of size, French bulldogs are slightly bigger than bichons frises. The former reaches about 10-14 inches in height and up to 31 pounds at maturity, while bichons come in at a maximum of 12 inches and 23 pounds at maturity.

A bichon frise develops visibly until six months of age, but it’s considered fully mature at around 1 year old. On the other hand, a French bulldog may keep growing until 9-15 months old, with some still developing their muscular body until 2 years old.

Both breeds have a similar lifespan, reaching about 14 to 15 years old and a minimum of 10 if healthy. In some cases, bichons may live up to 7 years longer than French bulldogs.

The small and fluffy bichon frise is a breed with a big personality. The pup is funny and intelligent, so it’s no wonder it charms its way through many royal families. In general, bichons are highly adaptable, so they can live in any dwelling and in any type of family – from single households to large families with kids. The bichon frise is alert, curious, and demands your attention. They easily become friends with other people and pets and are relatively easy to train.

The French bulldog has similar temperament and personality traits. It is playful, loves your attention, and is quite adaptable, so it can happily live in both small apartments in a busy city or in a large house in the countryside. Just like the bichon frise, the French bulldog is ideal for any type of family, from singles to couples and families with kids.

Both breeds love attention, so you should be able to spend time with your pup to keep it happy and well-behaved. One main difference between the two is that the French bulldog doesn’t tend to bark too much, but bichons may be quite noisy if not trained.

As with any dog, it’s important to start training your pup at a young age if you want a well-behaved dog. Both bichons and French bulldogs are quite stubborn, so you may want to opt for professional training classes, especially if you are a first-time owner. They are both quite infamous for being hard to housebreak.

It’s important to take your bichon frise and French bulldog to early classes and teach them socialization. Both breeds respond to positive rewards training rather negative methods. As quite stubborn pups with big personalities, training may require some consistency, but they can be easy to train when the right motivation is offered – such as treats.

There are a few other factors to be considered when choosing the right breed for your family.

One of the main aspects would be grooming. Bichon frise’s coat is as hypoallergenic as it can be, while the French bulldog’s coat is extremely short, so shedding is very low, too. However, bichons’ curly coats can be more difficult to maintain clean and untangled, so you should brush them more often. In general, bichons may need daily or every other day brushing, while the French bulldog will stay happy and healthy with weekly brushing.

Both breeds require nail clipping and baths at least once per month or whenever necessary (in case of a dirty coat). Many first-time bichon owners prefer to take their pups to a professional groomer since trimming the coat and the nails can be a difficult process. A French bulldog is easier to groom at home, but you need to pay extra attention to its facial folds and keep them clean and dry all the time.

Another important aspect is the need for physical activity. Bichons frises are more active than French bulldogs, so you may have to spend more time playing outdoors or indoors. About 30 minutes of walking per day is enough for both breeds, but bichons are more active, so many owners even let them compete in rally competitions.

The French bulldog stays happy and in shape with some light walking outside. You may want to avoid intense exercises for your pup because the flat, short nose means that it’s prone to breathing difficulties if the exercise is intense. Also, French bulldogs should not be allowed to exercise in very hot or humid conditions, and they must be kept away from pools or other bodies of water because they cannot swim. The bichon frise can swim.

Bichon Frise vs. French Bulldog: Which Should You Get as a Pet?

Both breeds are adorable lap dogs that share similar temperaments and needs. Bichons frises tend to be more demanding in terms of grooming and exercise, but they are perfect for owners with lots of love and free time.

If you want a hypoallergenic dog, both breeds are suitable. No matter if you live in a small apartment or a large house, these two pups will thrive in your household. They are both intelligent, and, with proper training, they make for an excellent companion for just about any family.

Lastly, if you can’t decide, you might also want to consider Frenchie Bichon – a hybrid that combines the best of both worlds.

All in all, perhaps the biggest differences between the two breeds are the physical features.

Choosing one pup is no easy task, but the comparison above may help you choose the right breed according to your preferences, availability, and expectations. As long as they are healthy, loved, and cared for, both bichons and French bulldogs are excellent companions which can adapt to any household.