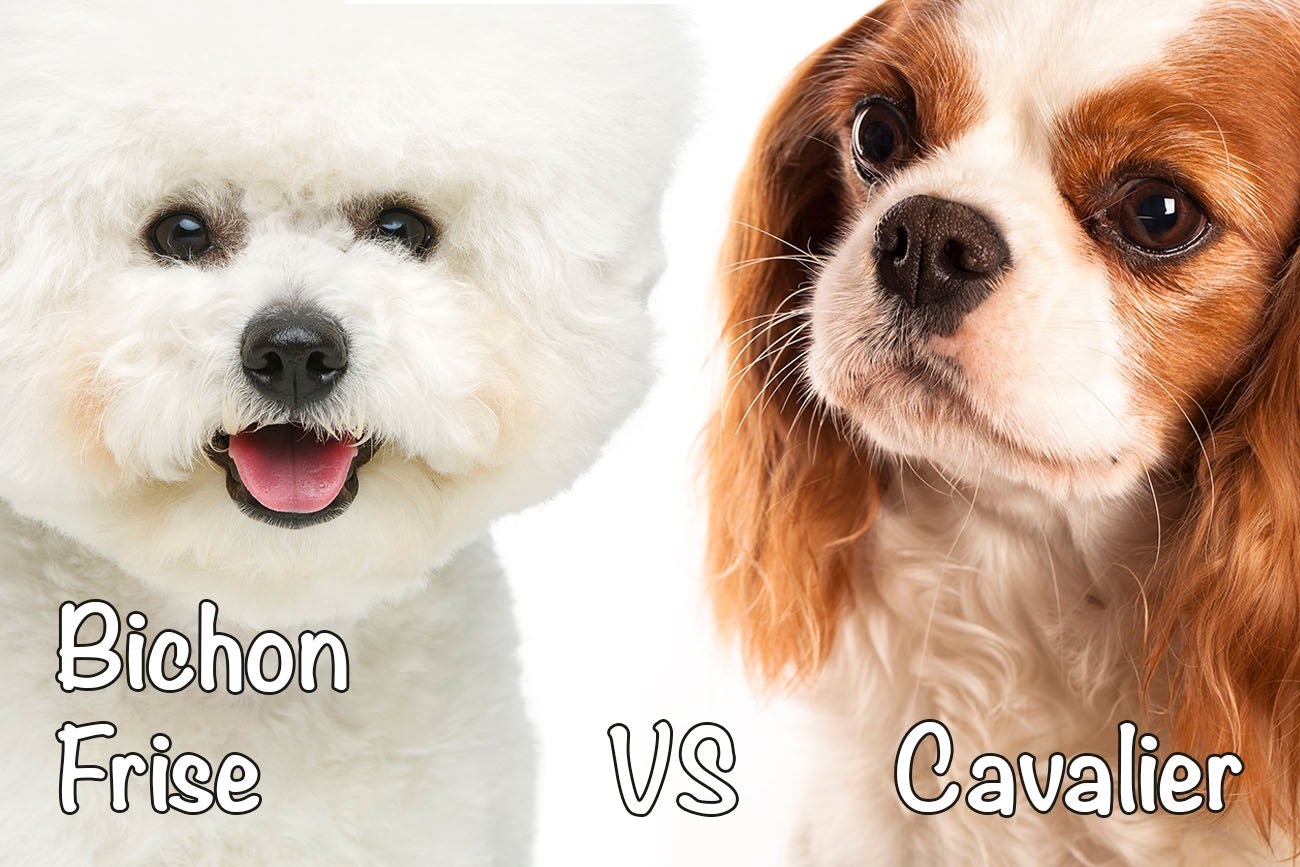 Are you trying to decide between the bichon frise and the Cavalier King Charles Spaniel? Both of these dogs make excellent companions but they have notable differences in appearance and disposition.

We have done a comprehensive comparison of the two breeds of dogs to help you understand how they compare. This will enable you to decide which one is a better fit for your lifestyle and personality.

Let’s get right into it.

The bichons were first recorded around the 11th century, and the first bichons frises made it on the scene around the 14th century. This was when French sailors brought the dogs back home from Tenerife, one of the Canary Islands. It is a common belief that the bichon frise is descended from the Barbet or French Water Dog that was used by the aristocracy for waterfowl hunting. The word “bichon” seems to be a derivative of “barbichon” which means “little Barbet.”

Bichon-type dogs became very common companion dogs among French nobles. This nearly led to their extinction during the French Revolution because of the bichons frises’ association with the French aristocracy. Dedicated breeders kept the breed alive and formed the adorable bichons frises that we know today.

A wealthy philanthropist, Eldridge prompted the resurgence of the spaniels from the past centuries by offering money to anyone who could restore the 17-century spaniel. A fascination with flat-faced breeds from Asia caused breeders to mix King Charles Spaniel with breeds like the pug, resulting in flat-faced spaniels.

The most distinct feature of the bichons frises is the powder-puff appearance that makes them look very fluffy. They have a dense undercoat and a curly outer coat which gives them a double coat. Bichons frises can be in white, buff, or cream.

The bichon frise is a small dog that stands between 9 and 11 inches high at the shoulders and that has a weight of between 10 and 20 pounds when fully grown. Their dark and round eyes are prone to tearing which makes it essential to add cleaning tear stains to a high-maintenance grooming regime.

The Cavalier is prone to shedding especially in the spring and fall which necessitates regular combing and brushing, although they do not have nearly the same grooming requirements as the bichon frise.

They have a moderately lengthy silky coat that comes in four color combinations:

The bichon frise has a longer lifespan of between 12 and 15 years. The Cavalier King Charles spaniel lives for 9 to 13 years. Cavaliers have significantly more health issues than bichons. This is possibly due to the extensive inbreeding that happened in their history as breeders tried to restore their ancient configuration in pursuit of a longer muzzle and a flat head.

Both are young puppies until they are about 3 months old. Weaning can start safely at about 8 weeks. They become adolescents at 5 to 6 months old and attain sexual maturity between 6 and 8 months. This is not an advisable age to breed them due to mental immaturity.

You can consider bichons and Cavaliers adults at one year of age. Most of the physical and mental growth has already taken place by this age. From the age of 8 years, they become senior dogs.

Cavalier King Charles spaniels could experience heart issues as they age. A majority of Cavaliers have a heart murmur due to mitral valve disease, which has a mortality rate of about 40%.

The bichon frise and the Cavalier King Charles Spaniel both have outgoing and friendly personalities that make them a great family choice. However, they both don’t tolerate being alone very well and are known for suffering from separation anxiety if left alone too long.

Both do very well with kids but the Cavaliers are slightly better suited for children. That said, this can differ between individuals. They are cat friendly. Both are friendly around other dogs and to strangers too.

Cavalier King Charles Spaniels have an above-average sensitivity level. They do not like an irregular daily routine and a noisy household. So the more confident and outgoing bichon frise may be a better choice for a busy household.

In general, bichons and Cavaliers are both great choices for novice dog owners due to their affectionate and playful personalities.

Both the Cavalier King Charles and the bichon frise are quite intelligent, so with enough patience and training they can do a lot of learning. They respond well to patience, consistency, and positive reinforcement. A bichon frise can be a little more stubborn, and may need shorter sessions.

So while they may be equally intelligent, the Cavalier can be a little easier to train.

Some more things to keep in mind include that:

Bichon Frise vs. Cavalier King Charles Spaniel: Which One to Get?

Now that you know the basics about these two breeds, let’s answer the most important question – which one is better for you?

Get a Cavalier King Charles Spaniel If:

Alternatively, you might also want to consider getting the Cavachon, a bichon frise Cavalier King Charles spaniel mix.

Both breeds are spectacular companions. However, a bichon frise is harder to groom while the Cavalier King Charles Spaniel is more likely to experience health issues.

They are both best suited for people who stay at home most of the time. Since both breeds can adapt to small spaces, they are perfect for apartments. A bichon frise is hypoallergenic which is good for allergy sufferers. Weighing the pros and cons of each can help you decide on the best dog for you.