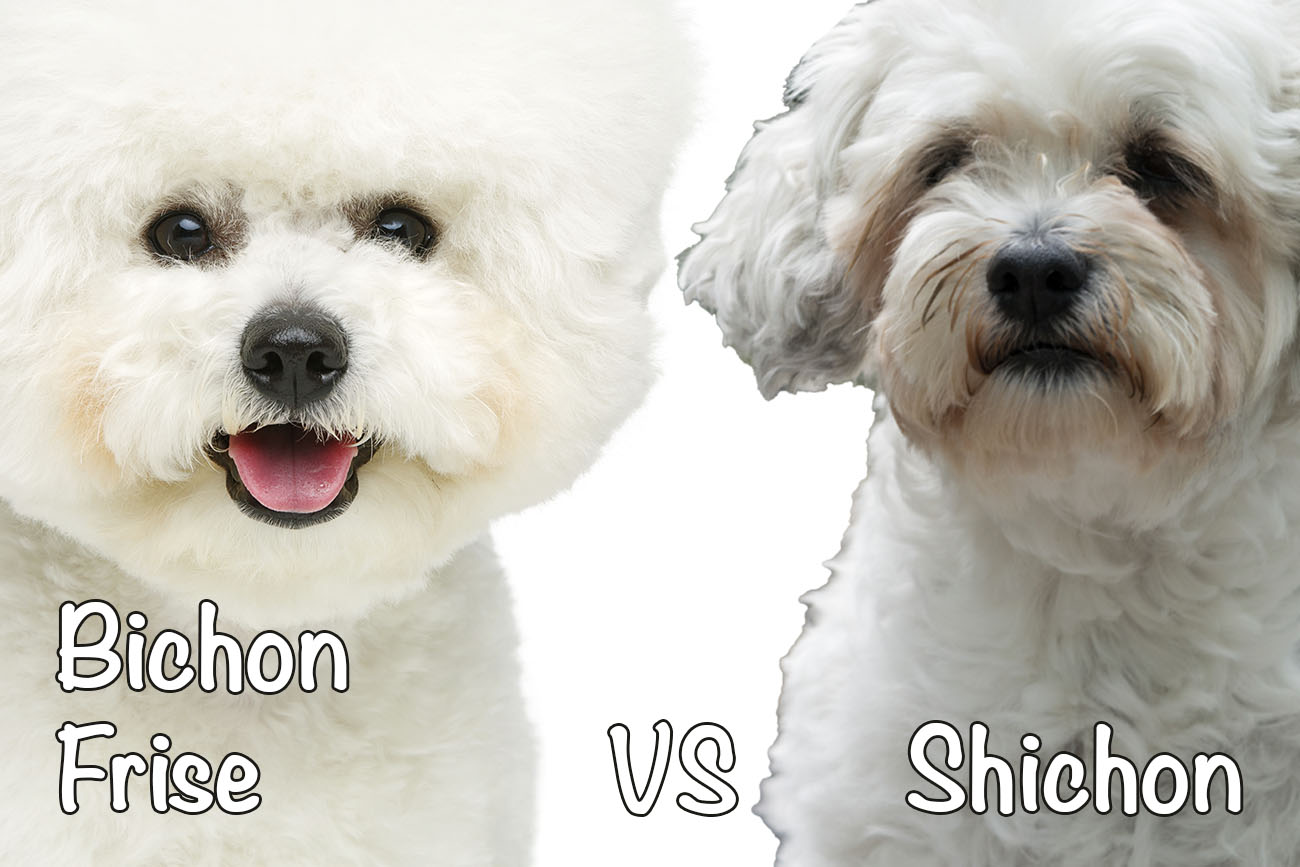 Finding the perfect companion dog is tricky and even tougher when you are considering bichon frise and shichon as your top two contenders. The bichon frise is a recognized breed with a love of people and an iconic puffy white coat. But when a bichon frise is mixed with the beloved shih tzu, you get a double dose of cute with the “teddy bear dog,” also called the shichon or zuchon.

So, which of these two – if either – should you get?

Let’s start by comparing the two breeds based on several different criteria.

The bichon frise is an ancient breed descended from many of the same water dogs that likely gave rise to the poodle. The early bichons traveled the globe and gave rise to several types of bichon breeds. The bichon frise specifically was first brought to Tenerife by sailors and was a popular companion dog on the ships.

Eventually, it became the preferred lap dog of royalty and aristocracy in France and other European countries. It lost its popularity for a while and nearly became extinct during World War II. However, a few enthusiasts rescued the breed. They established the modern bichon frise that became a favorite, especially in the United States.

The shichon shares this long and storied history with its bichon lineage. But it gets an extra ration of royal prestige from its shih tzu ancestry. Shih tzu kou translates as “little lion dog” and was likely developed by Tibetan monks. They became such a prized breed that they were restricted to the royal court. Anybody outside the palace found with a shih tzu could receive a death sentence.

Therefore, as a designer breed, the shichon has roots in European and Asian monarchies. They are not an established breed, so not much is known about their exact history. It’s not clear how long people have been breeding shichons, but while they are not recognized by the AKC, they are listed in the Designer Breed Registry.

Only dogs that breeders have carefully bred for multiple generations are considered real shichons. First-generation crosses are considered simple crossbreeds and can indicate backyard breeding.

They go by several other names, including the zuchon, teddy bear dog, or bichon tzu.

The bichon frise is famous for its white powder puff coat. These are sturdy, robust little dogs that stand between 9½ to 11½ inches at the shoulders. Their weight is not specified in the breed standard. While some could be as small as 7 pounds or as big as 20, they are most likely to weigh between 10 and 15 when full-grown.

They have a thick, double coat that requires heavy maintenance and can be white, buff, cream, or apricot. This means daily dedicated grooming and frequent visits to the doggy parlor. The bichon frise has a small dark nose and round dark eyes given to tearing. The expression is usually soft, alert, and inquisitive, with a tail that curves over the top of their body.

The shichon is similar in size, weighing between 8 and 16 pounds and standing between 8 and 11 inches tall. They have medium-to-long coats that are soft, plush, and wavy. Some have shorter (brachycephalic) noses like the shih tzu. Still, most simply have small button noses with furry faces, helping the teddy bear appearance.

They are often bi- or even tri-colored but may be solid colors too. Their colors include buff, tan, white, apricot, blue or gray, black, and chocolate. You may often see darker points on their ears.

The bichon frise and the shih tzu are both long-lived breeds. So both the shichon and the bichon frise can live well into their teens, usually as old as 16 years. They reach physical maturity between 10 and 12 months and are considered seniors between 8 and 10 years.

Although these are are both long-lived breeds that can be prone to some health issues, including the following:

Shichons who inherited the shih tzu’s nose can also develop respiratory issues and be more prone to heatstroke.

As a descendant of the bichon frise, the shichon is very similar in temperament to it. Both are devoted family dogs who need to be close to their people. These are not outdoor dogs, rather, dogs that need a constant connection.

They are both extroverted, confident, and playful and they get along well with other pets. However, they should be raised with cats to learn to accept them. Good socialization and obedience will go a long way, as well as frequent exercise. This is because both the shichon and bichon are prone to separation anxiety and hate being left alone.

If you need to leave them for a few hours, making sure they are well-exercised and crate-trained to help can help keep them settled while you are gone. This means they are best suited to homes with older children and adults, where at least one person is home most of the time.

They enjoy playing and can be quite the little clowns, as they adore attention. Due to their sensitivity and how deeply empathetic the shichon and bichon frise are with people, they are good choices for therapy and emotional support dogs.

Both the shichon and bichon frise are emotionally intelligent dogs who understand their owners very well. They are great problem solvers and have no problem working out how to sleep in your bed rather than their own or how to persuade you to share your dinner.

However, they can be easily distracted and lose interest when it comes to training. They also have minds of their own, and housetraining definitely takes a lot of patience and consistency. But these are not dogs that will respond well to harsh treatment.

To get the best out of your bichon frise or shichon, it’s vital to keep training sessions short and consistent. But above all, treats and enthusiastic praise is what they respond to best. With enough positive reinforcement, you can have them doing almost anything.

Some of the other things that you should keep in mind when deciding between the two breeds include:

Lastly, depending on the breeder’s reputation, a bichon frise puppy usually costs between $500 and $3000, while a shichon is generally between $300 and $2000. Remember, it’s always better to adopt rather than shop, so check out organizations such as the Bichon Frise Club of America Charitable Trust, Small Paws Rescue, or groups that specialize in rehoming shichons.

Bichon Frise vs. Shichon: Which Should You Get as a Pet?

So the bichon frise and the shichon have so much in common, how do you choose?

Get a Shichon If:

As the shichon is a bichon frise mixed breed, they have much in common with a bichon. However, they are usually a bit smaller, with a much wider range of colors and more variation in appearance. These two breeds are extremely similar in many key aspects, such as space and exercise requirements, hypoallergenic coats, temperament, and trainability.

However, the bichon frise is a recognized purebred. It may be easier to find one from a reputable breeder or rescue organization. They also have far heavier grooming requirements, but those are worth it for their striking appearance.