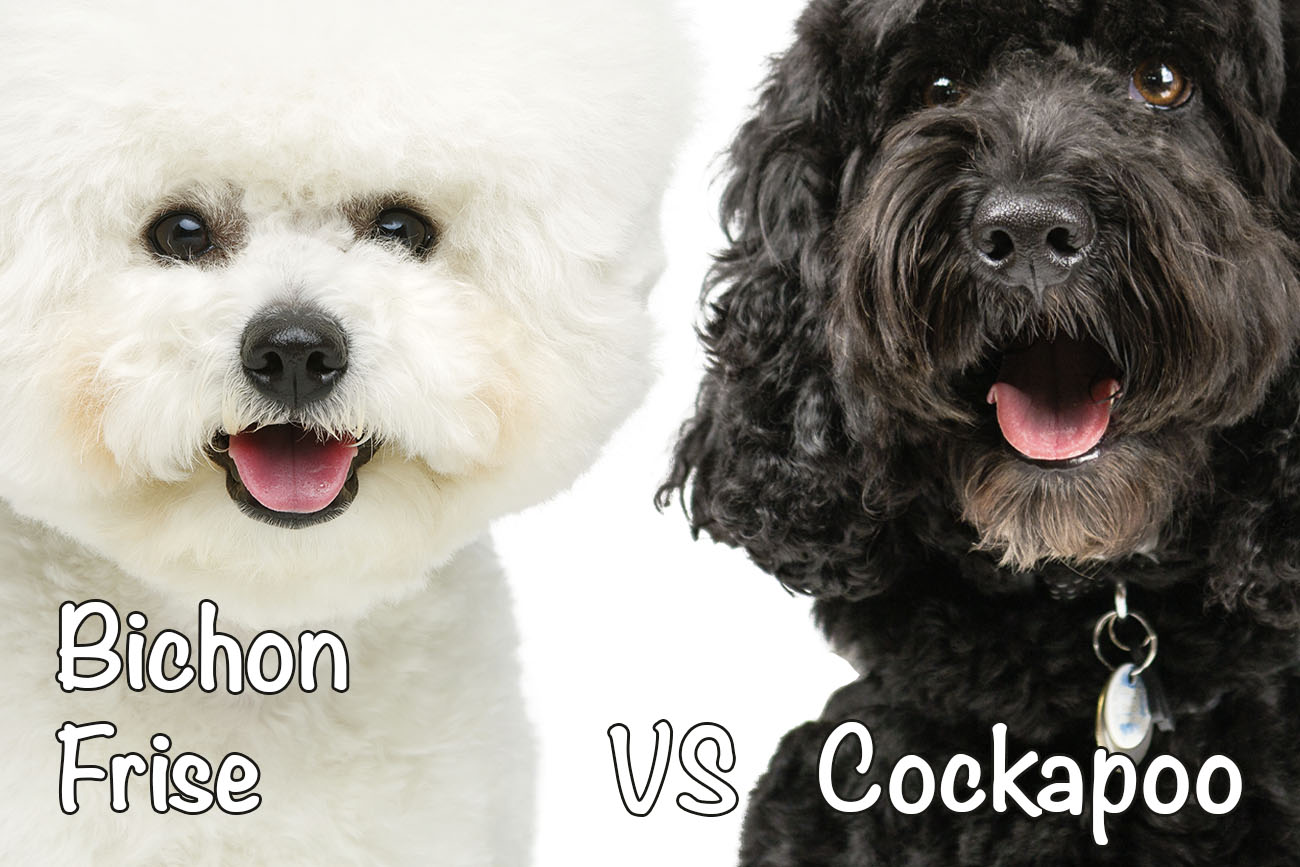 The bichon frise is an AKC-registered purebred dog that is loyal, affectionate, and loving. Being perfect lapdogs, bichons are one of the most popular toy breeds that are intelligent, trainable, and incredibly sturdy under that adorable appearance.

The cockapoo is a designer dog breed which is the smart mix of the cocker spaniel and a toy poodle. Intelligent, athletic, and potentially hypoallergenic, they make excellent choices for someone with pet allergies.

So which one is more suitable for you?

Contrary to popular belief, the bichon frise originated in Spain. Later, in France, specific trait developments occurred, resulting in the bichon frise that we know today. The earliest, happy-go-lucky dogs were bred by sailors for companionship and even bartered for supplies. Prior to the 14th century, they were most likely brought to the Canary Islands by the Spanish.

The bichon frise first arrived in the United States in 1955 and was admitted to the American Kennel Club Stud Book in 1972. In 1973, they joined the AKC’s non-sporting group, and in 1976, the first bichon frise made it across the world into Australia, brought by Harry and Margaret Begg, who oversaw the breed’s development.

Today, four distinct bichon-type breeds are thought to be descended from the original Bichon/Tenerife breeds: the Bichon Frise, Bichon Bolognese, Maltese, and Havanese.

Cockapoos can grow to be as much as 4 inches taller than bichon frises. The weight of a cockapoo and a bichon frise is nearly the same. Cockapoos are a mixed-breed or hybrid dog that has gained popularity in recent years.

While the cockapoo is a little dog, he’s tough, standing between 9.5 and 15 inches tall and weighing between 11 and 24 pounds. The modern Bichon Frise is a little white dog with a round nose and cranium. Bichons stand between 9 and 12 inches tall and weigh about 11 to 23 pounds. The eyes should be round and dark, and the nose should be black. The legs and head should be proportionate to the body size of the dog, and the tail should be curly and long.

And good news for folks with allergies – bichon frises are classified as hypoallergenic. Generally, their white, thick, curly coat will not cause allergic reactions. Before getting one, make sure to check with your doctor, though.

The cockapoo has floppy ears and a tan, white, cream, blonde, brown, or black coat, as well as a combination of these colors. Cockapoo coats can range from silky smooth to tight curls, but they typically fall somewhere in the middle. They are low shedders and are frequently described as hypoallergenic if the cockapoo takes after the poodle parent’s coat.

The average life span of cockapoo is about 13-15 years and that of a bichon is 12-19 years. Little dogs have long lives!

The cockapoo is little and sturdy, always up for fun, affectionate, with a sweet, alert smile on his face. Even as an adult, his activities and appearance make him appear to be a large puppy. The bichon frise is a very playful and intelligent dog that will get along well with even inexperienced pet parents and apartment dwellers.

They do, however, require a lot of playtime and activity, and they don’t like being left home alone for long periods of time. If you can give your dog a lot of attention and love, you’ll get it back tenfold from an adoring bichon.

Cockapoos are one of the most popular breeds because they combine the best characteristics of both breeds that constitute this pet – the cocker spaniel and the poodle, just as the bichon frise is a happy and cheerful dog. They are friendly, gentle, playful, and sensitive, and are known to adore people, and are extremely social.

Happy-go-lucky dogs, they tend to get along well with other dogs and they enjoy playing with children. However, because of their extreme attachment to their families, they can be prone to separation anxiety.

The cockapoo is a medium to high-energy dog that will require daily exercise and playtime. Although the bichon frise is not an overly active breed, they do enjoy playing and will benefit from a short walk every day. They are more prone to short bursts of activity followed by extensive periods of rest and relaxation.

Bichon Frise vs. Cockapoo: Which Should You Get as a Pet?

Both the cockapoo and the bichon frise are very affectionate with their owners. They are true companion dogs who enjoy playing. So, how do you decide which breed is a better fit for your family?

Here’s a list of the key things that will help you make a better decision:

In case you still can’t decide, also consider the Cockapoochon – a mix that combines the best of both (or all three…) worlds.

Both the bichon frise and the cockapoo are lovely breeds that suit most households. Bichons are less active, while the cockapoo will happily go on a long walk, run or hike with you.

Either way, they are both happy-go-lucky dogs with few behavioral problems, so whichever you choose, you’re in for a fun time!