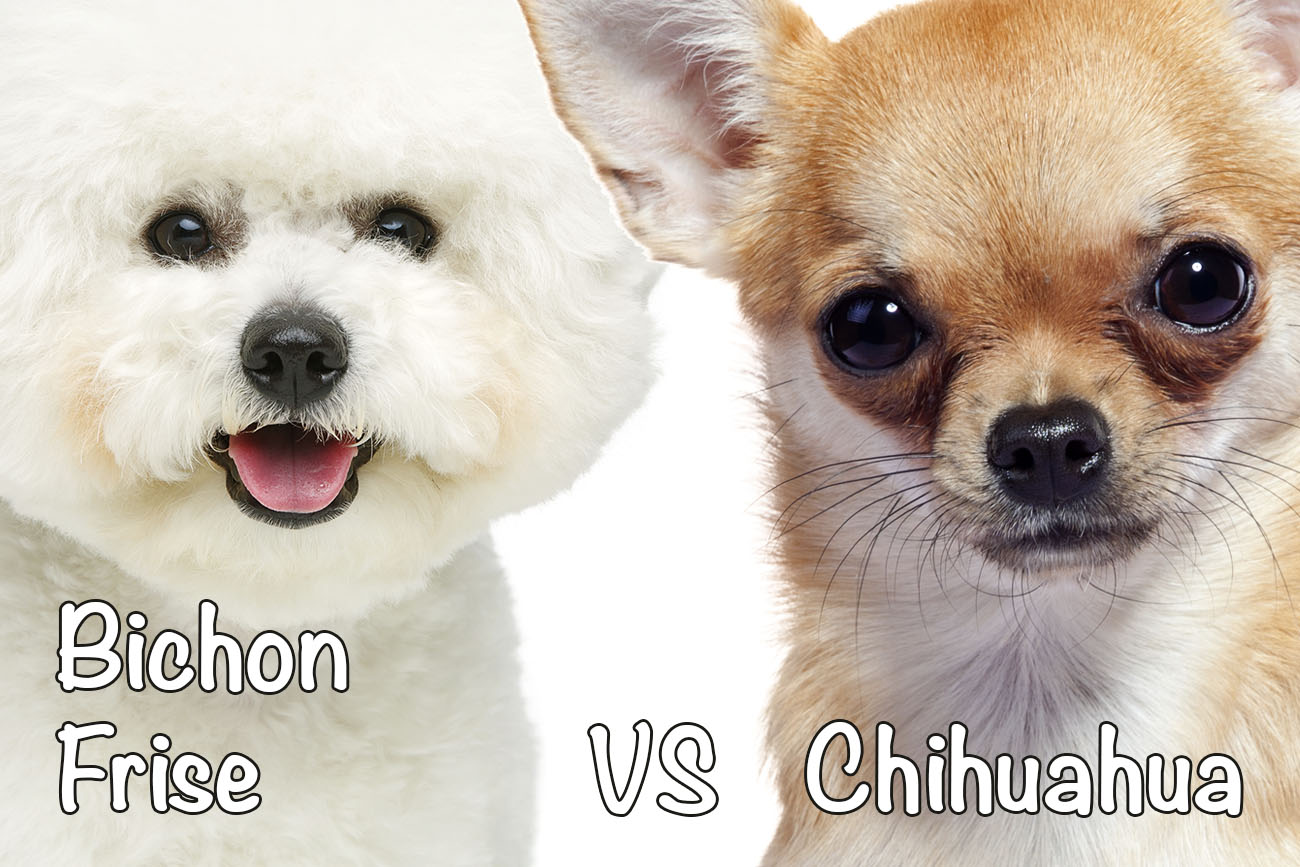 If you’re looking for a small breed companion, you may be debating whether to get a bichon frise or a Chihuahua as your next canine companion. These adorable breeds are affectionate, but they have different personalities and aren’t suitable for every family.

So depending on your lifestyle and needs in a dog, either a Chihuahua or a bichon frise may be better suited to you. But how do you know which? This guide will help you figure that out.

First, let’s start by comparing the two breeds based on a variety of factors.

Bichons frises originated from Spain, even though they are frequently associated with France. Tenerife, the largest of Spain’s Canary Islands, is thought to have been the starting point for modern Barbichon-type breed development. One of these breeds, the Bichon Tenerife, is named after the island and is believed to be the ancestor of the modern bichon frise. Keep in mind that there are other bichon-type breeds too which are not to be confused with the bichon frise.

Meanwhile, there are conflicting stories about the Chihuahua’s origins. However, historical evidence points to the teeny dog’s Mexican origins. Techichi, a small desert dog that predates Mayan times, is believed to be the direct ancestor of these dogs. This makes the Chihuahua a potentially ancient breed.

It’s not difficult to tell the two breeds apart when you see them. Indeed, in terms of size and appearance, they are vastly different. Despite being both small dogs, the bichon frise is larger than the Chihuahua.

Finally, the bichon frise most commonly comes in white colors such as white, apricot, buff, and cream. Meanwhile, the Chihuahua is available in various colors, including chocolate, fawn, cream, red, tan, and black.

Also, keep in mind that bichons frises require more grooming than Chihuahuas due to their thicker and whiter coats. Grooming a Chihuahua can take less than 15 minutes, but grooming a bichon can take several hours or more, especially if they are extremely dirty and their coats are matted.

Chihuahuas have an average life expectancy of 14 to 18 years. Their adulthood begins at the age of one. Around the age of ten, Chihuahuas are considered senior citizens.

On average, the lifespans of different dog breeds vary, with small dogs generally living longer than larger breeds. The bichon frise’s lifespan is, compared to chihuahuas, shorter – it is around 12 to 15 years. They reach adulthood at a year and are considered seniors at around 10 years old.

Bichons frises are incredibly intelligent and loyal, making them wonderful pets. They’re eager to learn and adapt in their desire to please their owners. They’re friendly and outgoing, but they can also be quite vocal.

On the other hand, Chihuahuas have a wide range of personalities, from fearless and outgoing to reserved and cautious. They are sometimes prone to issues involving anxiety, resource guarding, and even aggression. They’re tiny, but they’ve got a lot of personality. Despite their small stature, they’re known for their bravery, and many will attempt to defend themselves and their owners in the face of larger dogs or strangers.

Compared to Chihuahuas, bichons frises are more sociable and affectionate with other people, children, and other pets. They may be vocal, similar to Chihuahuas, but this is more due to the fact that they are a friendly breed.

When it comes to working and obedience intelligence, bichons frises score about average. They are also known for their adaptability, as they have a reputation as excellent problem solvers. In addition, they’re easy to train and enjoy learning new tricks. But they are sometimes difficult to housebreak.

The intelligence and quickness of Chihuahuas make them exciting pets. However, they’re a much feistier bunch and not always as trainable. To persuade these guys to do anything for you, you’ll need to lavishly reward them and use positive reinforcement.

Consistency and patience are key with both breeds, but on the whole, the bichon is typically more trainable than the Chihuahua.

Exercise and space requirements for the two breeds should also be taken into consideration. For example, even though the bichon frise is a lively breed, it can live happily in an apartment as long as it is given ample opportunity to play and run around.

It is recommended that they engage in 30 minutes of physical activity per day to expend any pent-up energy. While a bichon can do this by running and playing around the house, it is also recommended that they go for a walk outside or play in the park. This will also provide them with some mental stimulation.

The Chihuahua should also get about 30 minutes a day of play and exercise. Their small size means they are vulnerable to bigger dogs, and dog parks may not always be suitable for them. If you want to take your Chihuahua for a walk, keep it short and slow so they can keep up and avoid overexertion. Remember, they can only take tiny steps.

Bichon Frise vs. Chihuahua: Which Should You Get as a Pet?

When deciding whether or not to purchase a particular breed, you must weigh the relative costs of doing so. Each breed has ongoing costs, so don’t just look at the one-time price. For example, a bichon frise can cost between $700 and $1000 when first purchased, whereas a Chihuahua can cost between $600 and 800.

You must consider additional costs for each breed, such as food, grooming, and veterinary care. Naturally, a bichon frise would require more food than a Chihuahua because they’re larger. In addition, they need to be groomed more frequently, and while doing so yourself can save money, many people lack the patience and skill to do so.

Finally, bichons have more health issues than Chihuahuas, such as allergies and eye diseases, which are more common in bichons. Therefore, the type and need for pet medical insurance will be determined by the likelihood of your pet getting sick in the future. This additional cost needs to be considered when deciding between the two breeds.

While both breeds can easily live in smaller apartments, you must consider whether the breed you choose can live with children or other pets. For example, a bichon can get along with children and other pets, but a Chihuahua tends to become more territorial and can develop issues with anyone that isn’t their favorite person.

Furthermore, whereas bichons frises can be sometimes vocal, Chihuahuas have a tendency to bark more frequently and incessantly than bichons. Therefore, for people who live in areas with stricter rules for noise levels, bichon may be the more appropriate choice than other breeds.

Because a bichon’s coat needs a lot of attention, it’s more work than taking care of a Chihuahua’s coat. It doesn’t take long to wash off a Chihuahua if he gets muddy. You can dry him, then set him. It isn’t as simple with bichons, though. It might be more work for you if you live in an area where the dog can get dirty easily. Additionally, if grooming isn’t something you want to deal with due to money and time costs, a Chihuahua will probably be a better choice.

However, because the Chihuahua is so small, it is important to note that they are fragile dogs and must be handled with extreme care. Because these dogs are so delicate, it would not be the best place for them if children or other pets were around. If you want a dog that can play rough with others, a bichon frise is a better choice.

Keep in mind that the Chihuahua is not a hypoallergenic breed, but the bichon frise is. So it you or anybody in your home suffers from allergies, a bichon frise is a better choice.

Both of these the Chihuahua and bichon frise are equally loving and delightful to have as pets. However, just as humans have specific needs for a high quality of life, these dogs have specific needs that potential owners must consider. These needs must be met if you want to be the owner of either dog, and their characteristics will work well with you.

If you still cannot decide, you should also check out Chi Chon, a bichon frise Chihuahua mix that brings the best of both worlds.