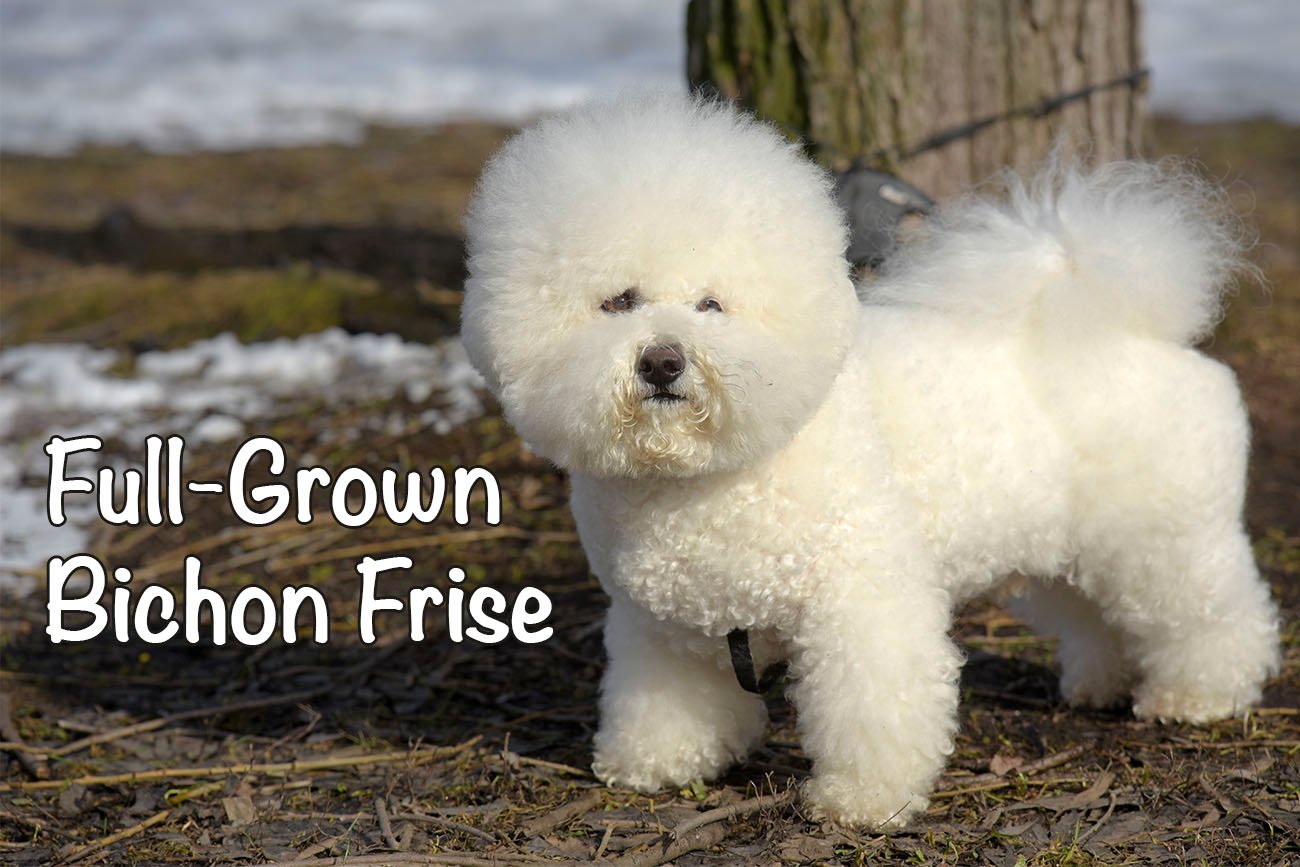 If you have a bichon frise puppy, you may have several questions about their growth and development. After all, knowing when your puppy is full-grown is vital to decide when to feed adult dog food, exercise, or spay or neuter.

Having a rough idea about what to expect in terms of size can help you plan ahead for your bichon frise’s needs.

When Does a Bichon Frise Stop Growing?

Bichons frises are considered fully-grown at between 10 and 12 months old. The bichon frise is a small breed, and small breeds do most of their growth far earlier than large breeds. The most dramatic change will happen in the first 4 months of your puppy’s life, with another smaller growth spurt between 4 and 6 months.

After that, growth will taper off, and the bichon should reach its adult height at around 8 months. From there, they will mostly fill out as they pass from adolescence to adulthood.

With that, let’s take a look at roughly how your bichon frise should grow over time.

A newborn bichon frise is unthinkably tiny. As a newborn, they can weigh as little as just over 2 ounces (60 grams). However, most newborn bichons frises will weigh between 6 and 8 ounces and should fit neatly in the palm of your hand. In short, they are about the size of a hamster.

Some puppies are born considerably smaller than their littermates and are typically called “runts.” These puppies usually have a harder time thriving and are more susceptible to puppy fading syndrome. Undeveloped or unusually small newborns usually occur because the fetus did not implant properly in the uterus, and did not get enough nutrition while developing.

A bichon frise puppy can be as small as 16 ounces at two weeks but will likely weigh more. A healthy pup will typically double their birth weight during the first week. They will gain between 5 and 10% of their body weight each week after that. This means that a puppy’s weight will depend on its birth weight at two weeks.

However, puppies usually do not grow on a perfectly linear scale. Anybody that has raised a puppy knows that they grow in spurts and bursts. A puppy born small, that is still small at two weeks, might grow to be just as big as a puppy born nearly twice its size.

The smallest four-week-old bichon frise puppy might be only 24 ounces, while larger puppies might be over 30. At this age, they will just have begun weaning and are transitioning to solid food.

By two months old, your puppy could be anywhere between 1 and 2 pounds, depending on genetics and other factors.

This means that you can estimate that a four-pound, six-week-old puppy should weigh about 16 pounds as an adult.

A healthy sixteen-week-old bichon frise puppy is usually between 3 and 5 pounds. At this age, they should be right at their most rapid growth stage, where you should see most of the growth spurts.

A six-month-old bichon frise will have done the bulk of their growth and are now approaching puberty. They can be as much as 70 to 80% of their adult size. From here, their growth will begin tapering off, and the smaller ones will be fully grown by 8 months.

As a bichon frise nears the 12-month mark, they do their last bit of growing, weighing an average of 7 to 20 pounds and standing between 9 and 12 inches tall. Their adult coat has come in a year, and from here on, your bichon’s features will barely change unless you allow them to become overweight.

However, there is some confusion online about bichon frise’s weight.

Many state that the bichon frise weighs between 7 and 12 pounds. Others estimate between 10 and 20 pounds. The AKC website stipulates between 12 and 18. So, why the confusion?

Well, the breed standard only specifies height, not weight. Therefore, there can be many variations in a bichon frise’s weight. It’s safe to say they can be anywhere from 7 pounds (if they are a teacup variety) to a bit over 20 pounds if they have a larger frame.

How to Tell If Your Bichon Frise Has Fully Grown

A fully grown bichon should weigh at least 9 pounds and stand 10 inches tall. A bichon frise should reach its full size between 6 and 12 months. Growth should have slowed down considerably around eight months. By weighing your puppy weekly, you can determine if they are still growing. From 10 months, there should be very little weight gain.

Keeping a log of your puppy’s weight gain is essential as it can help determine if they are growing at a healthy rate. If they seem to be struggling to achieve a healthy size or are growing too big too fast, it’s good to consult a veterinarian about underlying conditions and diet.

If your bichon frise is growing slower than normal, it can be caused by any of the below.

The main reason for stunted growth in most dog breeds are parasites like hookworms and roundworms. These parasites rob your puppy of the nutrition in their food, leading to deficiencies, constant hunger, and stunted growth.

Puppies that have been bred to be very small, such as the “teacup” varieties, are controversial. They are often the result of inbreeding or breeding runts together, creating the genetics for small puppies. Unfortunately, this can also lead to health issues. Puppies can also sometimes inherit disorders that stunt their growth, such as types of dwarfism. Hormonal issues may also be at work.

Malnutrition can stunt a bichon frise’s growth, but it is a very rare occurrence without the presence of parasites. Even the lowest quality pet food has to contain enough nutrients to sustain a dog, even though they may not thrive and may encounter other health issues later on.

There are a couple of conditions that can lead to symptomatic malnutrition. Among others, intestinal tumors, irritable bowel disease, and gut impaction need professional medical intervention.

2 Reasons a Bichon Frise Might Be Growing Faster Than Expected

If you have the reverse problem, below are two of the typical causes.

Genetics is the most likely culprit when it comes to growing too quickly or too much. It is possibly a recessive gene.

Although, in rapid growth disorders, there exists the possibility of a primary mutation. Primary mutations are a rare occurrence where the mutation results from variations and mutation in the dog’s DNA. These are new mutations rather than genes passed down a bloodline.

It is possible that overfeeding can directly accelerate a bichon frise’s growth rate. However, it is more likely to lead to obesity. There is usually a health problem, such as a recessive genetic predisposition to accelerated growth where overeating is merely a contributing factor.

The bichon frise is a small breed of dog. As such, it has a faster growth rate than large breed puppies. A bichon frise pup reaches reproductive maturity at six months old. By this time, they have are just about done growing.

Their fluffy coats set in, and they start displaying behavior associated with hormonal changes. By the time a bichon frise is twelve months old, they are adult dogs. Consult your vet immediately if you are concerned about your bichon frise puppy’s growth rate.