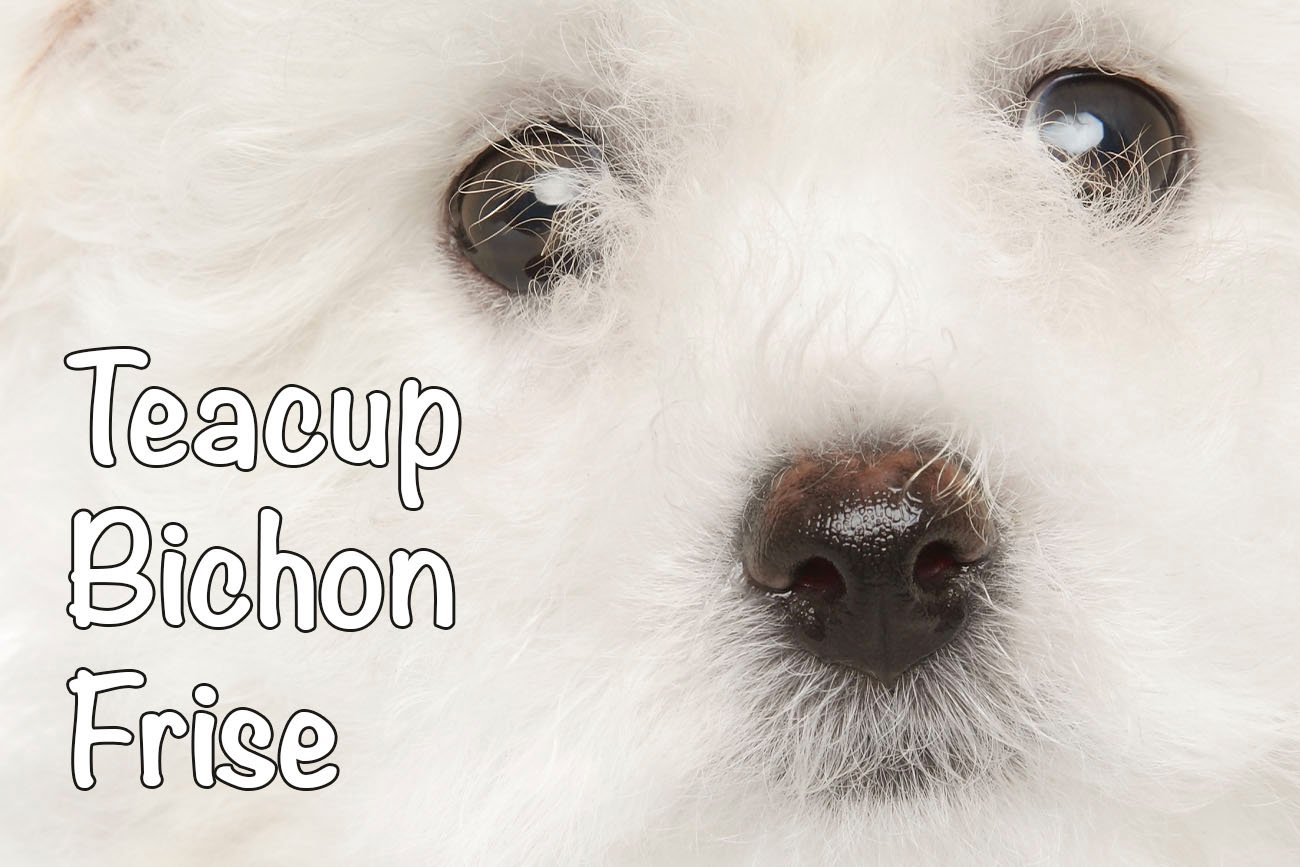 The bichon frise is one of the most popular breeds nowadays – it’s impossible not to love their fluffy appearance, energetic personality, and easy-going nature. The teacup bichon frise is simply a miniature version and a toy dog with plenty of love to give.

In this article, we will discuss all the reasons why teacup bichons frises are excellent companions and how they are different compared to bichon frises, so you can make an educated decision whether a teacup bichon frise is suitable for you and your family.

A History of Teacup Bichons Frises

Bichons are the descedents of the barbet, an ancestor of the poodle. Barbets were bred until the barbichon, a small and curly dog, was created. There are different types of dogs in this group, depending on where the breed was created.

The bichon is generally associated with the Mediterranean region, and some of the original breeds include the bichon Maltais (Maltese), the bichon Tenerife (from the Canary Islands), and bichon Bolognese (associated with Bologna, Italy). The modern bichon now has recognizable features but was created by breeding different ancestors, so no direct lineage can be established.

Bichons are merry, cheerful dogs, and they were often accompanying sailors moving around the world. It didn’t take long until bichons became the favorites of the Italian nobility, then the court dogs of medieval Europe, becoming popular in different countries including Spain and Italy.

The word “bichon” can be traced back to “bichonner”, a French word that means to “doll up”. This term was coined as King Henry III of France had a type of bichon which was always carried in a little basket.

The teacup bichon frise is not a recognized breed by the AKC. It’s a relatively new term that refers to a bichon frise which is smaller than the standard. Also, because teacup-size bichons frises are sometimes produced in a regular litter, the breeder may be unable to guarantee the size of the adult dog.

Regarding how teacup bichons frises are bred, there are generally three main methods, although some of them are more controversial than others. Breeders generally opt for one out of these three methods: crossing with a smaller breed, breeding runts, and introducing the dwarfism gene.

Breeding using smaller breeds may be one of the safest methods, but it can take several generations to create a teacup bichon frise. Breeding runts often poses ethical and health concerns as it sometimes refers to line-breeding or inbreeding using the smallest pups of each litter. As a result, puppies created through breeding runts often have hereditary diseases and other health problems. Finally, the dwarfism gene means that the pituitary gland of the pup malfunctions, leading to “dwarfism” or smaller pups than others. Breeders intentionally choose pups with this defect to create teacup bichons frises.

The best way of breeding a teacup bichon frise remains “breeding down,” or breeding pups with smaller breeds in order to have a healthy, small pup. These are often referred to as “hybrids.”

Teacup vs. Regular Bichon Frise: What Are the Differences?

A teacup bichon frise can have the same lifespan as a regular bichon frise, living about 12-15 years. However, it’s important to provide them with extra care and attention thanks to their small size. For instance, the tiny body can be easily injured when jumping down from a couch, playing with other pets, or even when playing with kids.

Teacup bichons frises may be easier to be taken care of compared to the regular breed. This can be attributed to their smaller body.

Yet, the grooming ritual should be the same as for a regular bichon, so it is important to make sure you have the necessary time to take care of your teacup pup. The smaller dimensions do not mean that the puppy is less demanding – instead, a happy and healthy pup will require time and attention, regardless of its size and breed.

The appearance of your teacup bichon frise depends on how it was bred. In general, bichons frises have a fluffy, curly, white coat and dark eyes. Their expression is cheerful and they are minimal shedders.

When it comes to the teacup bichon frise, the appearance may vary, especially if it was bred with a smaller dog to obtain the teacup dimensions. This allows for color variation, ranging from a light cream to even black or grey. Some pups can have a multicolored coat, too.

Although not completely hypoallergenic, bichons frises are perhaps the best choices for people who suffer from dog allergies. This is because there is minimal fur shedding, which can be further decreased through frequent trimming and brushing. Thus, the teacup bichon frise may be the top choice given its minimalist size.

Depending on how your teacup bichon frise was created, they will be more or less similar to the regular breed. Bichons are known for their cheerful, active, and good-natured personality, always seeking love and attention. The bichon has a winning personality able to charm the whole family.

The teacup bichon frise may have the same traits or borrow some others if one of its parents is from another breed. This depends on its lineage, so you may want to look into the specific breed before adopting the pup.

Most likely, the teacup bichon frise will suffer from separation anxiety, which is a considerable issue not only with bichons, but many other breeds, too. In other words, the pup won’t like being on its own for many hours, which could make them adopt destructive behaviors. When adopting a pup, it’s important to make sure you have the time necessary to spend with your pet or have someone else at home when you are away.

The dog’s temperament can vary based on training, heredity, and socialization. No two dogs are the same when it comes to temperament. In general, bichons are curious, loving, and extremely playful. To have a better insight into your teacup bichon’s personality, you can try to meet at least one of its parents before or after adoption, so you can see what type of temperament they have and how they will likely be when they reach maturity.

Bichons are not very active pups, but they still need their daily walks in the park to make sure their exercising needs are met. The teacup bichon frise is likely to require less exercise than the full-size counterpart. Also, you should keep in mind that a smaller dog also means a smaller bladder, so you should be ready for a tough session of housetraining – and accept the idea that you may never be able to achieve it in its entirety.

Teacup bichons frises can be healthy, but make sure you choose a responsible breeder. There are, as mentioned, three methods of breeding teacup bichons, but those that use the dwarfism gene or inbreeding will most likely result in unhealthy pups. Make sure you avoid unhealthy breeding practices.

Next, given the tiny size, the pup can be injured with ease, as briefly mentioned above too. If you have kids, you need to teach them to be gentle with the new family member. Other pets, stairs, or furniture could also lead to injuries as their tiny size means that they are more sensitive and frail than larger dogs.

Most likely, the teacup bichon frise will be more susceptible to the health issues often associated with bichons, such as a dislocating kneecap or the Cushing’s Disease that affects the pituitary gland, allergies, and others.

If it was mixed with a smaller breed, you may want to research it, too. In general, the pup may be likely to develop dental issues, cancer, heart problems, and others. It’s important to screen your breeder carefully to make sure the parents are healthy and free of genetic disorders.

Who Should Get a Teacup Bichon Frise?

The pocket-sized pup may be best suited for homes without children, who can easily injure them during playtime. Little kids can mishandle them, which may also cause temperament problems in pups.

Also, your home should be suitable for a pocket-sized pup. It’s best to avoid stairs or any areas from where your pup may jump and injure itself. Also, bichons are known for their separation anxiety issues, so it’s important to have sufficient time to spend with them at home, avoiding periods of loneliness.

Furthermore, if you plan to adopt a teacup pup, keep in mind their tiny bladder – full housetraining may not be achievable in such a case, so you’ll have to be creative and ready for cleanups. Although the dog is pocket-sized, it still has the same health, grooming, and cleaning needs as a full-sized bichon.

If you want to decrease the chances of adopting a teacup bichon frise that was bred using unhealthy breeding practices like selecting the dwarfism gene, you can opt for a mixed-breed alternative. There are numerous options that you can choose from:

This may be one of the best options if you want to stick as close as possible to the bichon appearance. It is a mix between the Bolognese and the bichon frise. The first one is a small pup with a white and fluffy coat, similar to the bichon. Both breeds are quite similar to the poodle. Bichoneses are healthy mixed breeds with a long lifespan, ideal for dog allergy sufferers, and are as loving as any other bichon can be.

The schichon is a cross between the shih tzu and the bichon frise. The coat can be black, cream, silver, brown, or white, among others. The schichon is sensitive, smart, and requires permanent attention. You should not leave your schichon alone for long periods. The shih tzu lineage will make your schichon quite stubborn, so formal training may be required.

One of the most adorable crossbreeds is, of course, the result between a bichon and a Pomeranian. No one can resist the fluffy, intelligent, and loving crossbreed. It is suitable for people living in an apartment, although is still quite active and can turn a bit mischievous if not taken out for walks periodically.

Similar to teacup bichons frises, parents are encouraged to teach their kids how to treat the pet delicately and with ultimate care. The tiny body can be easily injured.

A cross between the bichon frise and chihuahua, the chi chon is small, weighing no more than 10 pounds. It is an active, playful pooch, and can be an excellent watchdog. Similar to the regular bichon, chi chons require lots of attention, some people considering them quite clingy.

All in all, the teacup bichon frise, along with its full-size counterpart, can be an excellent addition to a loving family.

Given the tiny body, they are more fragile than bigger dogs, so you need to make sure you care for them and protect them against injuries. With patience and lots of love, the teacup bichons frises can brighten up your home, but make sure you choose a responsible breeder.