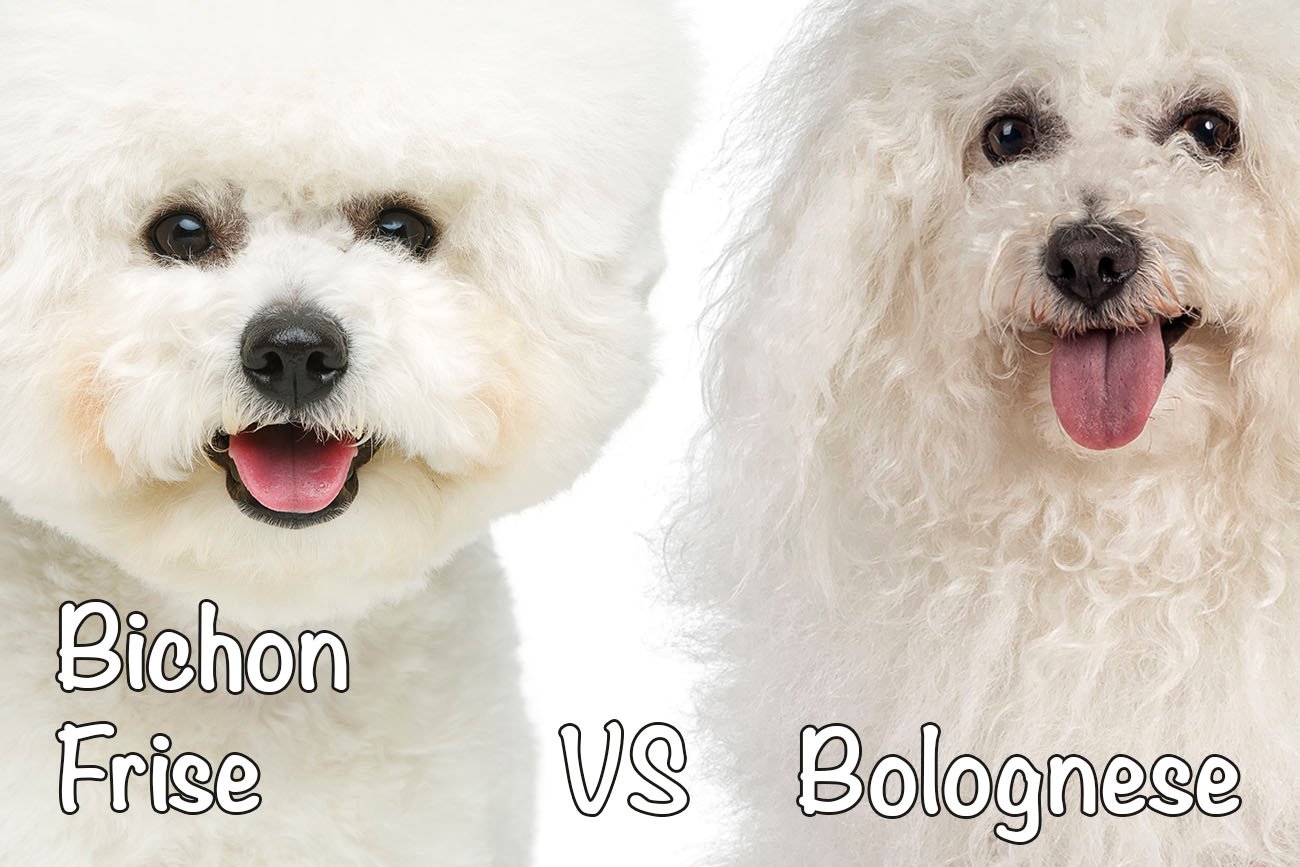 As bichon-type dogs, the bichon frise and the Bolognese are so similar, they are often mistaken for each other. And, if you have fallen in love with their adorable button noses, bright dark eyes, and gorgeous snowy coats, you may be struggling to choose between them.

You may have to look closely to spot the differences, but understanding what separates the bichon frise from the Bolognese is the best way to decide which is right for you.

With that, let’s jump right into comparing the two breeds based on a few different criteria.

The bichon frise and the Bolognese are both Bichon-type dogs, descended from the Barbet, a French water dog. In fact, the name bichon probably comes from “barbichon,” which means “little Barbet.”

These smaller companion Barbets were popular amongst the European aristocracy since around the 11th century. They spread from France to the rest of Europe and from Europe to colonies in South America and Africa, creating many different types of Bichons.

The bichon that arrived in Tenerife in the Canary Islands via Spain eventually became the bichon frise we know and love today. It ultimately made it back to Europe, where it became a popular dog amongst royalty and in circuses. Meanwhile, the Bolognese is the Italian bichon breed, deriving its name from the city of Bologna. It is believed that it was the preferred companion animal to the rich and powerful, including the Medici family.

The Bichon Frise and the Bolognese are both adorable white powder puffs. As toy breeds, what you might notice first about them are the deep, dark round eyes.

The male Bolognese is generally bigger than the female, while gender difference is less noticeable in the bichon frise.

The Bolognese has a distinctive single coat that hangs in ringlets. It has no undercoat, while the bichon frise has a thick, soft undercoat, giving the bichon a more puffy look, while the Bolognese can have wavy curls that are more prone to looking a bit straggly. This means the bichon frise requires slightly more regular grooming, although both breeds need loads of coat maintenance. They also require special attention to be paid to their dental, ear, and eye hygiene, as well as regular nail clippings.

The Bolognese reaches adolescence at around five months and sexual maturity at eight months. It has usually grown into its adult size at ten months. It settles down into mental adulthood at about fifteen months. In general, they live between twelve and fourteen years.

The bichon frise is slightly longer-lived, averaging between twelve and fifteen years. Bichon frises age similarly to the Bolognese, becoming seniors around nine years old and can be considered adults between eight and fourteen months.

Both the Bolognese and the bichon frise are merry little dogs who have playful and loving natures.

Neither the bichon frise nor the Bolognese tolerates being left alone for long periods, so these are not breeds for owners who are gone most of the day. The bichon frise is a bit more sensitive. However, the Bolognese can be shyer and more reserved. They may take longer to accept strangers.

Because of this, the Bolognese has more watchdog tendencies and can be a bit of a barker. However, both breeds are true companion dogs that need to be part of the family.

Both can be good apartment dogs and have little need to go off wandering. However, the bichon frise is moderately more energetic and will enjoy a little more walking and playtime. At the same time, the Bolognese will thrive on more naps and cuddles on the couch. However, about half an hour of exercise a day should be good enough for either.

Both are incredibly affectionate and form close bonds with their family and pet parents. Although they are good with kids and other dogs, the Bolognese is considered slightly better in these two aspects. Neither the Bolognese nor the Bichon Frise should live in homes with very small children that could accidentally hurt them or with owners who are away from them for long hours or periods.

The bichon frise and the Bolognese are both intelligent and trainable. However, training should start at a young age. These are sensitive dogs that will not respond well to punishment or harsh training methods, so consistent positive reinforcement is the best way to get results.

On the whole, these dogs are easy to train and learn quickly. They thrive on a challenge, and while they are companion dogs, they may still do well at sports like obedience trials and agility. These activities can reinforce the bond they have with their owner.

Because these are exceptionally gentle breeds, they also do well as therapy dogs.

Nevertheless, they do have a stubborn streak, especially the Bolognese. And this will need gentle handling and, perhaps, a bit of bribery to work through.

Although they are both excellent apartment dogs, the Bolognese is far more prone to barking and howling, which can be a problem for neighbors.

Both breeds are extremely low shedders and are considered fairly hypoallergenic.

The Bolognese has a reputation for learning to potty train a bit easier, especially with the use of pee pads and by teaching them to use a bell to let you know when they want to go outside.

Bichon Frise vs. Bolognese: Which Should You Get as a Pet?

When it comes to deciding between a Bichon Frise and a Bolognese, there are several factors to consider.

Get a Bolognese if:

Regardless of which breed you choose, ensure you never leave them home alone for extended periods. After all, they will pay you back with many years of devoted companionship.