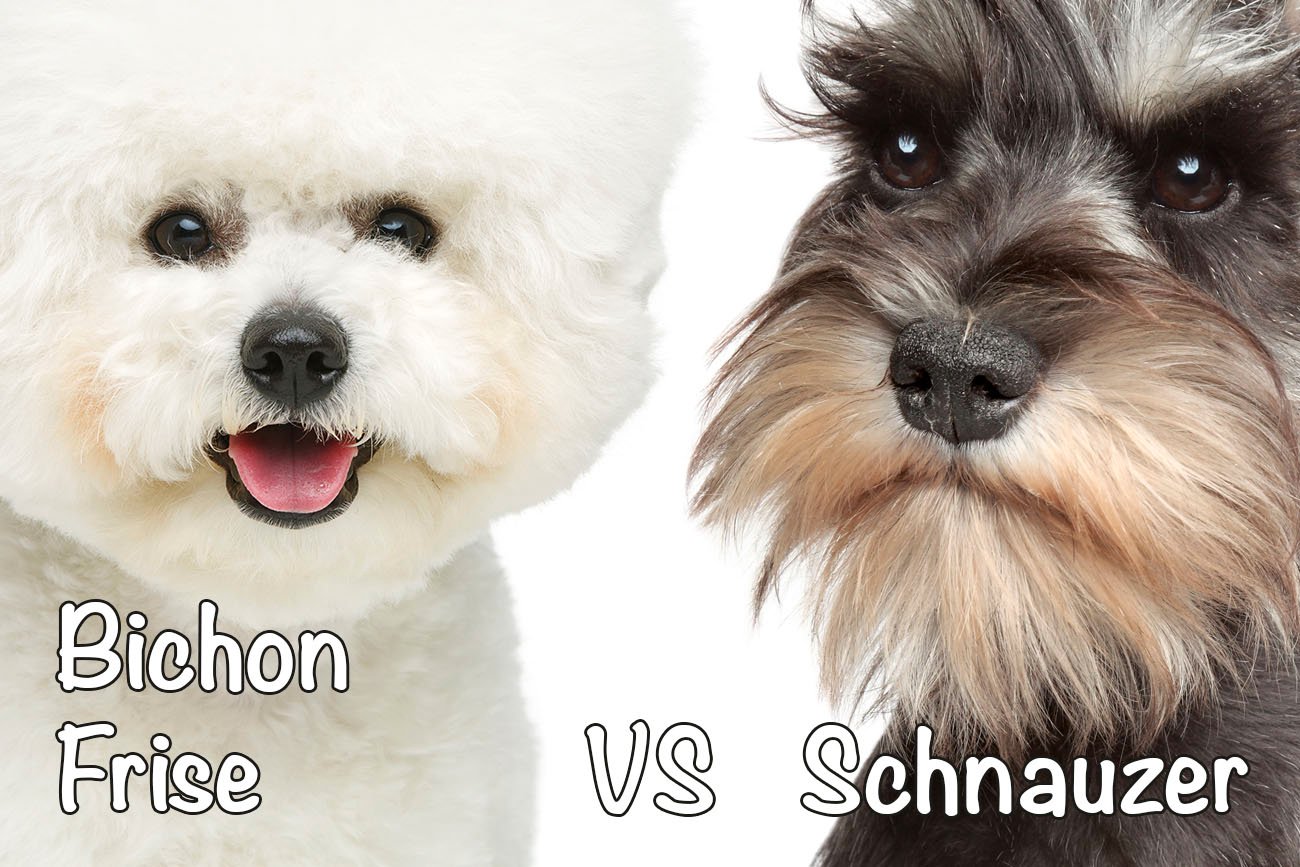 Small, intelligent, and ready to conquer your heart, bichons frises and schnauzer are two types of dogs that can brighten up your household.

If you’re unsure which pup is best for you, we’ve compared these breeds focusing on the most important aspects, including their temperament and intelligence.

Bichon frise can be traced back to several centuries ago, approximately the 14th century. It is believed to be descended from the Barbet, a woolly dog, from which its family name is derived, the Barbichon. The family also includes similar-looking breeds, such as the Bolognese, the Maltese, and the Havanese.

The adorable bichon frise appeared in the Mediterranean area and became the top choice for many European royal families. In 1956, the bichon was brought to the United States and has remained a favorite for many people ever since.

The schnauzer (pl. schnauzer), is a German breed that dates back many centuries, just like the bichon frise. Its name can be translated to “mustache” or “snout,” a reference to its specific bearded looks. The breed can now be found in three sizes: miniature, standard, and giant schnauzer.

The breed, initially found only in the standard size, was bred to catch rodents in the Middle Ages. Later on, during WWI, this pup was used for guarding purposes by the German army.

The miniature and giant sizes resulted from mixing the standard pup with other breeds. This means that, technically, there are three different breeds based on their size. The miniature schnauzer appeared much later on, in the 19th century. The standard schnauzer was bred with smaller pups, such as the affenpinscher or even the poodle, to create a smaller version of the regular schnauzer. It is unsure how and when it was created, but the earliest record of a miniature schnauzer is in 1888.

Bichons frises are white and fluffy with black noses and eyes. This pooch is a small lap dog breed with a puffy appearance and is known to be low-shedders, a popular pick among people that suffer from allergies. However, the double coat requires considerable grooming to avoid mats and tangles. A bichon frise reaches up to 9-11 inches in height and 12-18 pounds, similar to the mini schnauzer.

A standard schnauzer reaches about 18-19 inches tall and 30-45 pounds at maturity. Its striking feature, the bearded look, was bred for a specific purpose: when braided, the “mustache” served as protection against vermin bites. The pup is usually black or has a “pepper and salt” look with no other markings. It has a sporty figure with a wiry coat.

A miniature schnauzer has a very similar appearance, but weighs between 11 and 20 lbs and grows up to 12-14 inches.

Standard and miniature schnauzer live up to 13-16 years old, similar to bichons frises. These breeds mature at about 1 year old, although most bichons reach their full size at around 6 months old.

The bichon frise has a loving personality. It loves to be around its owner and is a true charmer. It loves to play, cuddle, and doesn’t like spending time on its own. It is friendly with other people but this watchdog may bark at strangers without proper training.

Temperament is very similar in both types of schnauzer. This pup is lively with a medium need for physical activity for mini and a higher need for the standard size. It’s guarding its owner and is always up for fun activities, no matter what you do.

Similar to a bichon frise, this pup needs to make physical contact with you, while the mini may as well be described as a lap dog. As they were bred for hunting rodents, they may love chasing a squirrel or two – or even other small animals in your household or outside, and also love digging.

Schnauzer and bichons frises are intelligent breeds, but this doesn’t necessarily mean that you can train them with ease. They are stubborn, but a firm (and very gentle) approach can always help you turn your pup into a well-mannered, well-rounded adult dog.

Just like with any other breed, these pooches require early socialization and exposure to all kinds of different experiences.

Schnauzer is surely much louder than a bichon frise, but the latter is not very friendly with strangers, either. A bichon frise has a lower physical activity need than a schnauzer, but you still need to take it out for a walk every day.

A mini and a bichon may be suitable for living in a small apartment, but a standard schnauzer has a sporty build. Schaunzers’ “farm dog” qualities mean that you need to ensure appropriate physical exercise for them, otherwise they will turn to destructive behaviors.

Although both breeds have watchdog qualities, the schnauzer may turn out to be a handful if you live in a block of flats. This pup is a true guardian, so it’ll let you know every time someone is close, although they don’t usually bark without a good reason – like someone approaching. It is quite suspicious of strangers and it will bark at full volume if its home is threatened – or perceived as being threatened.

In turn, this makes the schnauzer a great choice for families. They are protective and the perfect loyal companions, especially if you have kids. Bichons frises, on the other hand, can adapt to all types and sizes of households but may be less recommended to families with small kids since they can be easily injured if not handled with care.

Bichon Frise vs. Miniature and Standard Schnauzer: Which Should You Get as a Pet?

If you’re up for a challenge, the schnauzer will definitely keep you busy. Its native intelligence means that you should teach your pup who’s the alpha in the family from the beginning, otherwise it will be in charge. Bichons frises may be more suitable for first-time owners – among other things, they are easier to train.

Schnauzer and bichons frises are low-shedding dogs, so they are both suitable if you suffer from allergies or you simply don’t want a pup that sheds too much around the house. This is because these breeds have a double-coat, so all the falling hairs get trapped in it. However, bichons frises have a curly coat while schnauzers have a wiry coat, so the former requires daily brushing, while the latter should be brushed every two or three days. This means that they are quite high-maintenance pups, so you need to have plenty of free time to care for them.

If you live in a small flat, a mini schnauzer or a bichon frise may be the best choice since a standard schnauzer requires more space to play and live. If you are worried about barking, both breeds tend to be quite noisy, but bichons can be trained easily and are not as protective as a schnauzer.

Also, schnauzer were bred as hunting dogs, so it may be difficult for them to adapt to a household with small animals like birds and cats. Although very gentle and friendly, schnauzer love chasing and digging, so you need a firm and consistent training routine to have a well-mannered pup.

All in all, bichons frises and schnauzer have some common traits, but their personalities and needs are quite different.

If you’d love to adopt a pup that loves cuddling and napping, you may need to choose between a mini and a bichon frise – depending on how much time you want to spend on training and maintenance. However, if you want a family guardian with a loyal and protective temperament, a standard schnauzer may be the right choice.

Lastly, you might also want to consider the Chonzer, a bichon frise and miniature schnauzer cross.