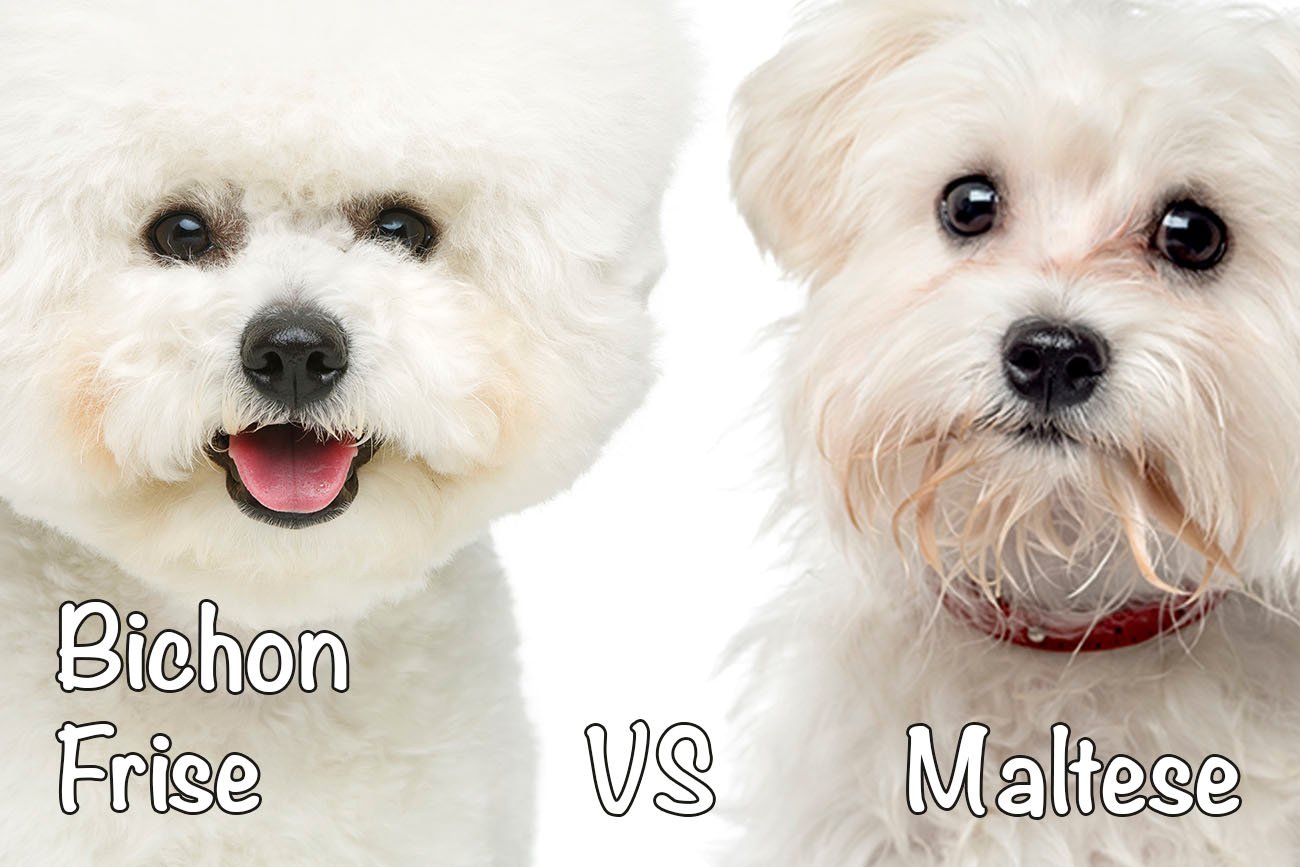 As two bichon-type dogs, the bichon frise vs. the Maltese is a showdown between two of the world’s cutest companion dogs. Both are known for their snow-white coats. One comes with an irresistible powder puff hairstyle, while the other is known for its long, silky strands.

Both are friendly and loyal breeds that make excellent companions, so how could you possibly choose between them? Luckily, we’ve compared the two to help you decide.

With that, let’s jump right in.

First, let’s take a brief look at the backgrounds of the two breeds.

The bichon frise and Maltese are both bichon-type small breeds. There is a common misconception that the Maltese definitely come from the island of Malta. However, their name actually comes from the Semitic word “màlat.” This could refer to a number of places in the Mediterranean, including the Sicilian town of Melita, the Adriatic island of Méléda, and Malta.

To make things more confusing, a dog called the canes melitenses or Melitaie appears on ancient Greek and Roman pottery and is mentioned by Aristotle (384–322 B.C.). At the time, an island off the coast of Croatia, Mljet, was also called Melita, just like Malta. So, it is not known if the Maltese genuinely come from Malta.

What we do know is that the Maltese has enjoyed a long and privileged history. As a preferred pet in times for Greece and Rome, it went on to become a favorite amongst the French aristocracy. It would also enjoy Royal Patronage, as both Queen Victoria and Queen Elizabeth I had Maltese dogs. Mary Queen of Scots actually had a Maltese hiding in her skirts at the time of her beheading!

It is very possible that the Maltese dog is actually an ancestor of the bichon-type dogs like the bichon frise, Bolognese, and Havanese.

In the 17th and 18th centuries, a trend began to try to breed the Maltese as small as squirrels. This nearly caused their extinction, and breeders had to mix in miniature Spaniels, Poodles, and East Asian breeds to save the breed.

The Maltese found its way to America through British immigrants in the 1800s. It has become a prized companion dog here, even if the true Maltese is still relatively rare compared to other toy breeds such as the chihuahua or pomeranian.

The first recordings of bichons appeared around the 11th century, and the earliest bichon frises first made it on the scene around the 14th century. It is generally accepted that the bichons are descended from the barbet (French water dog) that was used by the aristocracy to hunt waterfowl. The word “bichon” seems to come from “barbichon,” which means “little barbet.”

However, as noted above, there may be some common ancestry with the Maltese, especially since they were both common companion dogs for the French aristocracy.

Bichons soon became popular all around Europe and eventually and would accompany colonialists and merchants to the colonies in South America and Asia. Here they would form new breeds like the Havanese from Cuba.

French sailors from Tenerife in the Canary Islands kept these bichon-types on their ships. At the time, they became known as the bichon Tenerife. They soon became popular again with the French aristocracy, although they would nearly be wiped out during the revolution. Luckily a group of dedicated breeders kept the breed alive and eventually formed the bichon frise we adore today.

The bichon frise is a small, square, but sturdy little dog. They stand between 9 and 11 inches high at the shoulders and weigh between 10 and 20 pounds. Their signature hairstyle is puffed out, giving the appearance of woolly lambs or fluffy clouds.

They get their look from their dense undercoat and curly outer coat, giving them a thick double coat that needs daily grooming. Their dark round eyes are given to tearing, so cleaning tear stains should be part of the grooming process.

The bichon frise can be white, or combinations of white and buff, apricot, or cream. Their beautiful tails plume over their back.

By contrast, the Maltese is tiny. They only stand about 7 to 8 inches at the withers, and they weigh a mere 4 to 7 pounds. They have a single coat of long, straight, silky hair that is always white. This gives them an especially graceful appearance when they are trotting by, as they can look like they are gliding on air.

Their tear stains should also be part of their daily grooming, and their teeth should never be neglected. Their eyes are dark ochre, and their noses are always black. The tail may also curve over the back.

The bichon frise and the Maltese are both expected to live between 12 and 15 years. With proper nutrition and exercise, they can live well into their late teens.

They are young puppies until they are about 3 months when they begin teething and become adolescents at 5 to 6 months old. They reach sexual maturity between 6 and 8 months, and you can consider them young adults at a year. From around eight years of age, they become seniors.

If you aren’t adopting, be sure to buy from a reputable breeder. A badly bred bichon frise can be prone to health problems such as:

The Maltese is prone to similar problems. However, since many breeders breed for smaller and smaller dogs as part of the micro or teacup dog trend (there are teacup bichons frises too), they can have additional issues. These include:

Both breeds are prone to weight gain, so their weight needs to be monitored to prevent serious health issues later in life. Similarly, a daily dental cleaning should be part of their grooming regime, as bad teeth can lead to heart problems, inflammation, and even diabetes.

In general, the bichon frise is a happy-go-lucky, outgoing dog who loves companionship. They usually get along well with other animals, children, and strangers, although they should always be properly socialized.

They have a slight independent and stubborn streak, so they benefit from patience and loads of positive reinforcement in the form of praise and treats.

They are playful, fun-loving dogs and will enjoy taking part in a sport like dog dancing or just playing fetch. Bichons can also be very mouthy as puppies and quite energetic before they settle down. So be sure to have plenty of games and chew toys available if you get a puppy.

Ultimately, bichon frises are companion animals and want nothing more than to be as close as possible to their people. They share this trait with the Maltese, and as a result, both breeds are prone to separation anxiety. They are not dogs to be left alone for long periods.

The Maltese can be a bit more standoffish with strangers if not properly socialized and can be given to barking if their owner allows them to become bored. Malteses may also be scared of bigger dogs.

They are active dogs for their size, and while they won’t keep up on long hikes, they need daily playtime, short walks, and training.

Malteses need loads of supervision. Despite their size, they are fearless and can easily get into trouble or become injured. Their coats make them look bigger than they are, so owners should be careful.

The adult Maltese is usually docile, sensitive, and they tend to be one-person kind of dogs, meaning they tend to bond with a single member of the household more than others.

Both the Maltese and the bichon frise are intelligent. However, the Maltese is generally a little more trainable and loves learning new tricks. They excel at sports like agility, rally obedience, or even carting.

The quirky, fun bichon frise can be a little less interested in training, although they are generally highly food-motivated. With consistency, patience, and positive reinforcement, they can do plenty of learning and prove themselves to be extremely clever little dogs.

Some other differences between the two breeds to keep in mind include:

Bichon Frise vs. the Poodle: Which Should You Get as a Pet?

Chances are that by this point, you are starting to lean one way or the other. If you still need some help in deciding between the two breeds, below is an overview of the situations in which you should get each of the breeds.

The bichon frise and the Maltese are ideal companion dogs. However, the Maltese’s extremely small size means it needs far more care to avoid injury. It should only interact with much bigger dogs or small children under supervision. The Maltese may also be prone to slightly more health problems relating to their small size, such as low blood sugar levels.

In short, both dogs are suitable for owners who are home most of the day and enjoy grooming their pets. They are good hypoallergenic companion breeds, but they do need a little training and socialization to avoid problem behaviors.

The bichon frise can fit in well with slightly larger families and other animals. On the other hand, the Maltese might do better in a small household of mostly adults that can keep an eye on it and stay close.

If you still can’t decide between the two, you might also want to consider getting a maltichon (bichon frise x Maltese mixed breed) to get the best of both worlds so to speak.