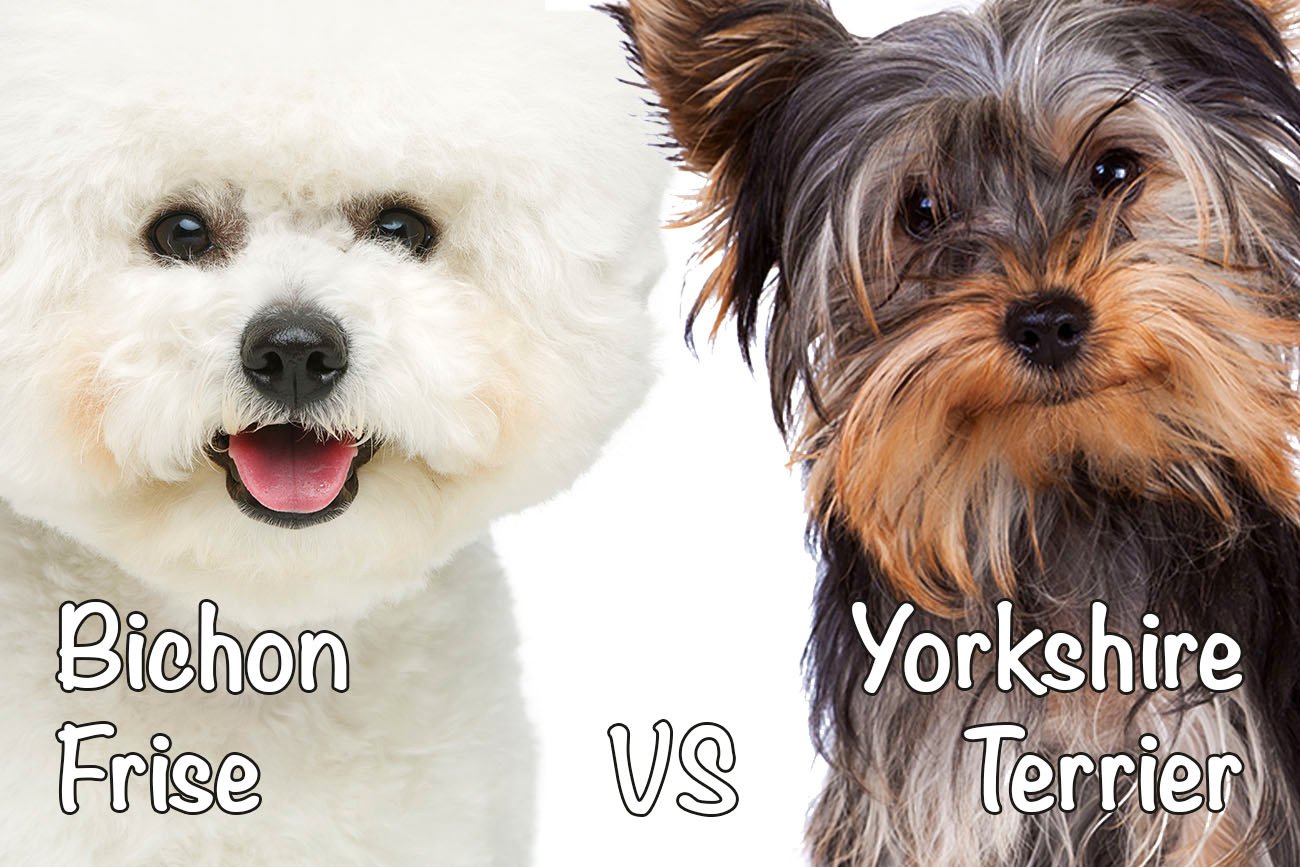 Yorkshire terriers and bichons frises have a lot in common. With both being toy-sized breeds, having to choose just one of the two as a companion can be difficult. Do you fancy the white and puffy appearance of the bichon frise or the long, straight, and silky look of the Yorkshire Terrier?

Both are lovable dogs that are loyal to their owners, making them magnificent companions. We have compared the two to help you figure out which one is a better fit for you.

Let’s jump right in and look at how the two breeds are different and how they are similar.

This small breed of dog is of the bichon-type, and in French, the name translates roughly to “curly-haired toy dog.” The bichon-type is commonly believed to have descended from the Barbet, a wooly, medium-sized water dog. The word “bichon” comes from the word “barbichon,” which means little barbet.”

Several small terrier breeds were combined to create the Yorkshire terrier as we know it today. The breed was developed during the 19th century in Yorkshire, England. They were named after the region in which the breed originated.

The Yorkie was first shown in London under the breed name of the Broken Haired Scotch Terrier in 1861, and in 1874 the dog was given the current name, Yorkshire terrier. During the Victorian Era, this dog changed over from a dog that hunted vermin into a companion dog for royalty.

A bichon frise is a small dog that stands at an average height of 9.5 to 11.5 inches; this places the breed at an approximate weight of between 7 and 20 pounds. They stand out due to their puffed-out signature hairstyle, giving the appearance of fluffy clouds, making them very cute.

They have dense inner fur and curly guard hairs giving them a thick double coat. This makes grooming a high-maintenance activity that needs regular brushing and trimming every four weeks to prevent matting. They have dark round eyes given to tearing, which necessitates cleaning tear stains.

In contrast, a Yorkshire Terrier is a significantly smaller dog standing at only 6 or 7 inches tall and weighing anywhere from 3 to 7 pounds, making them among the smallest dogs in the world. They have V-shaped ears that stand erect.

The Yorkshire Terrier has the most notable feature of a long, delicate, and straight coat that is steel blue on the tail and the body and tan everywhere else. Long hair on the top of the head is also characteristic of the breed. However, these beautiful coats need daily care to prevent tangling.

Yorkshire terriers and bichons frises both have a life expectancy of around 12 to 15 years. With proper care, exercise, and maintenance, they could both live well into their late teens.

They are young puppies until 3 months of age, and gradual introduction to solid food should start at around 4 weeks of age. Both breeds can start house-training at about 5 to 8 weeks, but they will need frequent trips outside because of their tiny bladders. This makes house training a bit difficult, and it can take longer for them to learn to “hold it” than for larger dogs.

These puppies become adolescents at the age of 5 to 6 months, and they reach sexual maturity between 6 and 8 months.

Between 8 months and a year, Yorkies and bichons frises are considered adults. Generally, the smaller the dog, the quicker they will reach maturity. They become seniors at around 8 to 11 years of age, at which time extra care is required to keep them healthy.

Undersized Yorkies generally have a shorter lifespan as they are especially prone to health problems such as :

Since both of these breeds are small dogs, they are prone to weight gain; therefore, their weight needs to be monitored keenly to avoid issues later in their lives.

Yorkshire Terriers can be said to be a bit feisty. While they are highly affectionate towards their owners, they tend to be suspicious of strangers at times and may bark at intruders or strange sounds. They need a lot of attention too and long hours alone are not good for them.

The bichon frise is an outgoing dog who loves attention and affection. It is not too feisty. They are playful and also do not tolerate being alone well. The bichon frise is independent and needs patience and loads of positive reinforcement to shape good behavior.

Both of these breeds need a lot of supervision. A Yorkie especially does better with older children because of their petite size, and they could get snappy if triggered. They are also vulnerable to accidents, so they should always be monitored with small children or bigger dogs.

Yorkies are above average intelligent dogs, ranked 34th of the 138 qualifying breeds. The bichon frise is quite smart too and follows closely. That said, it is not considered quite as smart as the Yorkie. However, they are both easily trainable. The bichon may need more patience during training, but with consistency and short, positive sessions, you can get them doing all kinds of tricks in no time.

Here are some more things to keep in mind:

Yorkshire Terrier vs. Bichon Frise: Which One to Get?

So, you are convinced you want one of the two but now sure which one? Continue reading.

Get a Yorkshire Terrier If:

Both the bichon frise and the Yorkie Terrier make excellent companions. They have many similarities, as they are both hypoallergenic companion breeds that do well in small spaces. These two dogs also need consistent grooming.

Overall, the Yorkie is a more delicate dog that needs a puppy-proofed home and will do better in a household with adults. They can also be more suspicious of strangers, while the bichon frise is a more friendly, confident, and outgoing dog.

If you’re still undecided, you might also want to consider the Bichon Yorkie, a mix between the bichon frise and Yorkshire terrier.