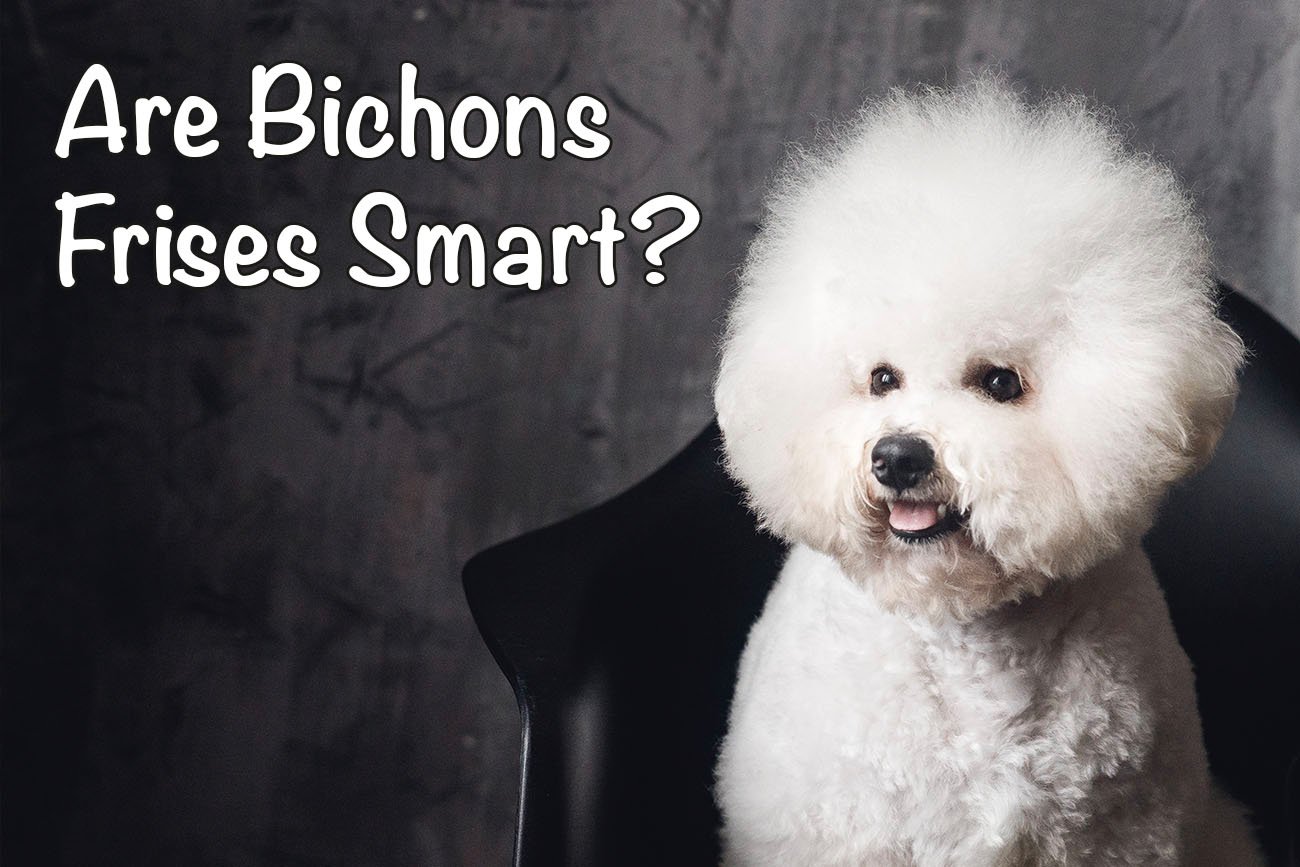 The bichon frise is a popular breed amongst dog show enthusiasts, thanks not only to their unique puffy coat but also their intelligence. They display both an ability to learn fast and find solutions to challenges.

But what do we mean when we ask whether the bichon frise is smart? Join us today as we dive deeper into the breed’s intelligence and smarts, and explore the difference between the two.

Intelligent vs. Smart: The Difference

The technical difference between the two is that intelligence is a natural ability born with, while smarts refer to the knowledge acquired through learning and your ability to problem-solve.

According to one source, smartness is an acquired trait, while intelligence is an inherent skill. The bichon frise excels at both. We see their smartness at work when a bichon successfully repeats tricks during a show. Their intelligence becomes obvious in their aptitude for learning and their ability to interact with and manipulate humans.

Inherent or instinctive intelligence refers to traits with which a dog is born. Today we see dogs purpose-bred for various domestic roles like protection or companionship. In the past, selective breeding focussed on a much wider range of traits.

Some breeds hunt, others guard, and many breeds help farm livestock. We may not use dogs for these tasks as often today, but the traits are still there. Herding dogs still want to herd. They will herd your other pets if they must, but herd they will. Their level of skill at doing this inherent task is their inherent or instinctive intelligence. It is this that we call ‘intelligence’ when speaking of dogs.

It is the most difficult trait to measure. After all, what exactly does one measure? Adaptive intelligence is a trait that you come to know over time. You will notice if your dog struggles to navigate tricky terrain or can’t figure out unfamiliar tasks.

The bichon frise excels at this kind of intelligence and is a phenomenal problem solver. It could be because of their specific kind of inherent intelligence. Bichons are primarily companion animals. Companion animals need to read situations and respond accordingly. In addition, they need to gauge their owner’s emotional needs and find ways to express their wants and needs. Such requirements make adaptive intelligence crucial.

When exploring human intelligence and the many ways to measure it, it quickly becomes clear that the idea of an IQ is subjective. For example, some people possess musical talent while at the same time struggling with spatial reasoning.

The Problem with IQ Tests

A standard, one-size-fits-all IQ test will score someone like that very poorly, and yet they may be prodigious in a type of intelligence for which the test did not account. In this example, that is music, but it can be several different categories of intelligence.

The same principle applies to our dogs. Only it is much harder for us to make accurate measurements of how brilliant our dogs are at being dogs. So, for example, while they don’t have musical skills, they may have other skills at which they excel. Keeping in mind that the question of intelligence is very subjective, you can use some tests and criteria to get an idea of your dog’s intellect. You can find some basic intelligence tests for dogs here.

In 1994 Stanley Coren, a professor of canine psychology at the University of British Columbia, reached out to organizations such as The American Kennel Club, asking for feedback on what they considered the most intelligent breeds and the reasons why.

The professionals from the AKC sent 199 responses, which Coren used as the basis for his influential book on dog intelligence, ‘The Intelligence of Dogs: A Guide to the Thoughts, Emotions, and Inner Lives of Our Canine Companions.’

The approach described by Coren is biased because the AKC mainly works to maintain breed standards and is focused on rigid criteria. They rated the intelligence of different breeds on only two criteria, understanding new commands and obeying the first command.

These criteria consist of the kind of things that makes a dog a good show dog. That plays right into the bichon’s strengths, but it also leaves one with the sense that there is more to the bichon than just showing talent. It seems that the full scope of their smarts does not show in these rankings.

How Intelligent Is the Bichon Frise?

According to the method developed by Stanley Coren, the bichon frise ranked as the 75th smartest breed of dog. That may sound like a poor result, but amongst the many highly intelligent dog breeds considered for Coren’s ranking, 75th place puts the bichon at above-average intelligence.

In a 2009 interview with Psychology Today, Coren discussed an updated perspective on evaluating a breed’s intelligence. When ranked more generally, the bichon frise ranks 45th on the list of most intelligent breeds. They share the 45th spot with the Siberian husky and the King Charles spaniel.

Is Every Bichon Frise Smart?

The bichon frise’s adaptive intelligence can vary greatly from one dog to another. Therefore, it isn’t easy to gauge whether or not a bichon puppy excels at problem-solving. It is a skill that develops as the brain grows and reaches adulthood. That makes it difficult to choose a bichon frise pup that will grow up to be smart. The best way to improve your odds of getting a smart bichon frise pup is to find a good breeder.

Good dog breeders select the traits that define the breed. With bichon frises, the breeder will select the dogs that are the best companions to breed with because that is the breed’s defining characteristic. We have seen a connection between a companion dog’s inherent intelligence and adaptive intelligence. Therefore the two traits go hand in hand, and good bichon frise breeders will favor both.

Does Inherent Intelligence Vary from One Bichon to the Next?

Evidence suggests that the bichon frise, or at least an early form of the breed, has been around since the 14th century. Selectively breeding for companionship over such a long time means that the associated traits are deeply ingrained in the breed.

How to Tell If Your Bichon Frise Is Intelligent and Smart

We all love our pets, and we tend to see the best in them. It is important that one not get too caught up in whether or not your bichon is a little prodigy or whether they struggle in this department. It’s our bichons frises’ personalities that define the breed.

That said, there are ways to tell how intelligent and smart your dog is. Unfortunately, both are very subjective, and there is no definitive measure of either.

Is My Bichon Frise Intelligent?

When we look at inherent intelligence, we must observe how well the dog performs tasks at which the breed should excel.

It is pretty easy to tell that a herding dog has below-average inherent intelligence. They will perform poorly at herding. When it comes to companion breeds, things get a bit more nuanced. For example, at what is a companion dog supposed to excel? For what behavior are we looking?

It boils down to how well your bichon frise interacts with you and how they respond to your mood, emotions, and behavior. A good companion dog is pretty much a good emotional support dog. If your bichon is oblivious to your emotional state or does not seek your time and attention, they could have an underdeveloped inherent intelligence.

Is My Bichon Frise Smart?

One would think this would be an easier trait to measure, but it’s more nuanced than immediately obvious. For example, we know that the bichon frise’s adaptive intelligence correlates with their inherent intelligence. So, how do you differentiate between the two? If the breed is selectively bred to be good at reading and responding to their owner, is their ability to assess a situation and find a solution adaptive, or is it inherent?

This confusion makes the obvious criteria nearly impossible to use on a bichon.

Instead, one will have to look at how they interact with their surroundings when their attention is not one you. That is an easy, inadvertently inevitable trait you will notice if you are involved in dog shows and know how to train a dog accordingly. However, if you are not a professional trainer (most of us aren’t), look for signs that the dog can be a problem-solver.

How to Make Your Bichon Frise Smarter

You can help your dog live up to its full potential by implementing a few tricks to make them smarter. The most important thing to do is start training and socialization as soon as your pup is at an appropriate age.

Training helps teach your dog to respond to a vocal cue. In addition, the dog needs to differentiate between different commands, which requires them to develop the ability to retain complex information in their long-term memory.

Socialization offers several benefits for your dog’s adaptive intelligence. First, they will learn how to interact with other dogs and the world in general. Not only does socialization offer your bichon frise the opportunity to get smarter, but it also teaches its skills it will need to expand its intelligence throughout its life.

The bichon frise is an intelligent breed. They rank above average compared to all other dog breeds, but that ranking doesn’t consider other forms of intelligence.