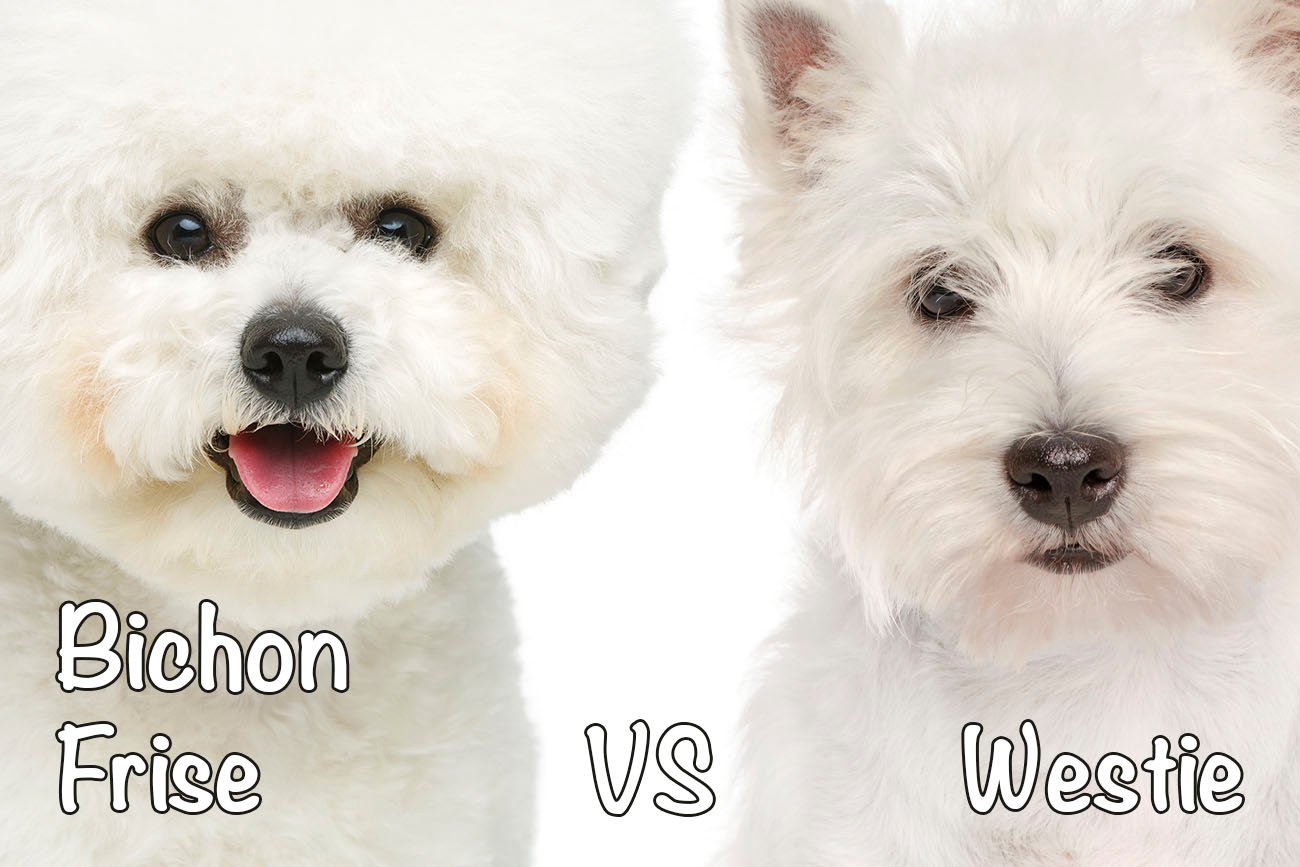 If you want to choose the right dog for you, you need to be ready to make such an important decision. You should know more about the breed’s characteristics, temperament, and whether you can handle your new responsibilities. If you are convinced that it’s time for a new buddy in your family, congratulations!

Below, we’ll help you decide whether a bichon frise or a West Highland terrier is best for you.

The West Highland terrier, or Westie for short, was bred in Scotland as a working dog. Its main duty was to hunt rodents, but also other animals, including foxes and otters. Its exact origin is unknown, but many claim that the Westie has been around for about 300 years.

Bichon frise’s origin is also mostly unknown, with some voices claiming it to have originated in the Mediterranean region. Unlike the Westie, bichons were bred as companion dogs rather than working dogs. They are loving lap dogs that conquered many royal hearts throughout history, especially in the 1600s. This pup even became a favorite of several painters, such as Francisco de Goya (i.e., the painting entitled “The White Duchess”).

The bichon frise is one of the few different types of bichon breeds.

Both bichons frises and Westies are white, but that’s where the appearance similarities end. Westies have harsh hair, while the bichon frise is curly and has a teddy bear-like look. The facial traits are also distinctive, mainly due to the Westie’s pricked years, while the fluffy bichon has dropped ears.

Westies are white-colored pooches, as this color was specifically chosen by breeders to avoid colors that can be confused with other animals being hunted, like foxes. The pup has a robust body, reaching about 10-11 inches and 15-20 pounds at maturity. The bichon frise has approximately the same height but is a bit lighter, usually between 12 and 18 pounds.

Both breeds have a life expectancy of 13-15 years. However, with proper care, diet, and health check-ups, they can live longer. They reach adulthood at about 12 months old, but they usually grow the most until 6 months old.

A Westie is, at its heart, a terrier, so its temperament does shine with a few terrier traits, such as going after rodents, barking, and digging. However, you can discourage your pup via proper training. You may have to be ready to put up with vermin hunting as this trait may not be so easily eliminated. Because of this, a Westie will not be a good choice if you have other small pets in your household, such as hamsters or birds, due to its hunting trait.

The teddy bear-like bichon frise is sweet and lovable. It comes with a clowny personality, but they are also sensitive to your emotions. No matter what you do or like, a bichon frise is very adaptable because they love spending time with their owner. Whether you want to go for a walk or you simply want to cuddle on the sofa on a lazy afternoon, the pup will be more than happy to join you.

One of the main differences between the two breeds is their personality. This is because the bichon frise was bred as a companion dog, while the small terrier is surely fiercer than its looks. Although not a fighting dog, the small Westie will not walk away from a quarrel and welcomes any adventure in its life. Also, the terrier genes make the Westie quite competitive and aggressive when it’s around same-sex dogs, so it may not be the best choice for a household with other male dogs. Female Westies tend to be more aggressive than males.

Westies are very intelligent dogs and they love to think for themselves. You need to be consistent and positive when training, just like with a bichon. Both breeds are known for their stubbornness and friendliness and can get along with everyone, as long as you opt for early socialization.

Bichons frises are intelligent and easy to train, to an extent, since they live to make you happy. However, you need to keep in mind that they are very sensitive to the tone of your voice, and they don’t react well to punishments or threats. This charming breed can learn tricks, so it easily becomes the center of attention in your household.

It’s important to note that both dogs are small and have quite a low need for physical exercise. Yet, this doesn’t mean that they don’t need to be active. Small daily walks of up to 30 minutes or indoor playtime will be enough for these pups to stay healthy.

Both breeds have a double-coat, which means that they are low-shedders. Grooming needs are quite high as you need to brush them regularly, ideally daily, especially if you opt for a long-hair look, to avoid mats and tangles. The pups need frequent bathing, and their white coats may easily get dirty, especially during outdoor playtime. Thus, you have to wipe their coats and bathe them as often as necessary.

Both pups have sensitive ears which need to be checked weekly for irritations, bad odors, redness, and dirt. The facial hair must also be kept short and clean to avoid eye infections.

No matter which breed you choose, it’s important to train the dog as early as possible. This will help it be happy and healthy while staying away from dangerous or destructive behaviors. Westies may be trained out of barking and digging, but hunting will remain their favorite activity.

Bichon Frise vs. West Highland Terrier: Which Should You Get as a Pet?

The Westie has quite a different personality compared to a bichon frise. If you want an independent pup, and you don’t have any small pets that could be turned into prey, the Westie will be a great addition to your household.

Both breeds are good with kids, but it’s best to supervise them around younger children. Westies may snap if they are treated badly, so many specialists recommend leaving them with kids older than 7 years. However, with proper supervision, both breeds can integrate well in families with smaller kids. These breeds are low-shedders, so they are a good choice if you want a hypoallergenic dog.

The Westie comes with several terrier traits – which are more of a working dog rather than a companion pup like a bichon. Apart from the differences in looks and personalities, you may also want to consider how much time you can spend with your pup and whether you can keep it healthy and happy. With proper physical exercise, both breeds can do well in a small apartment or a large country house.

If you can’t decide, consider the Wee-Chon too – after all, it combines the best of both worlds.

For first-time owners, bichons frises may be more recommended than Westies as they tend to be more tolerant and adaptable. Westies will do well as long as you don’t have any small pets in your household – or same-sex dogs that could ignite the sparkle of aggressivity.

Both breeds require love and care to thrive and have approximately the same grooming needs. Westies are best for more active people that can keep up with their love for adventure and physical exercise, while bichons don’t mind whether they go with you for a walk or you both enjoy a lazy afternoon on the sofa.