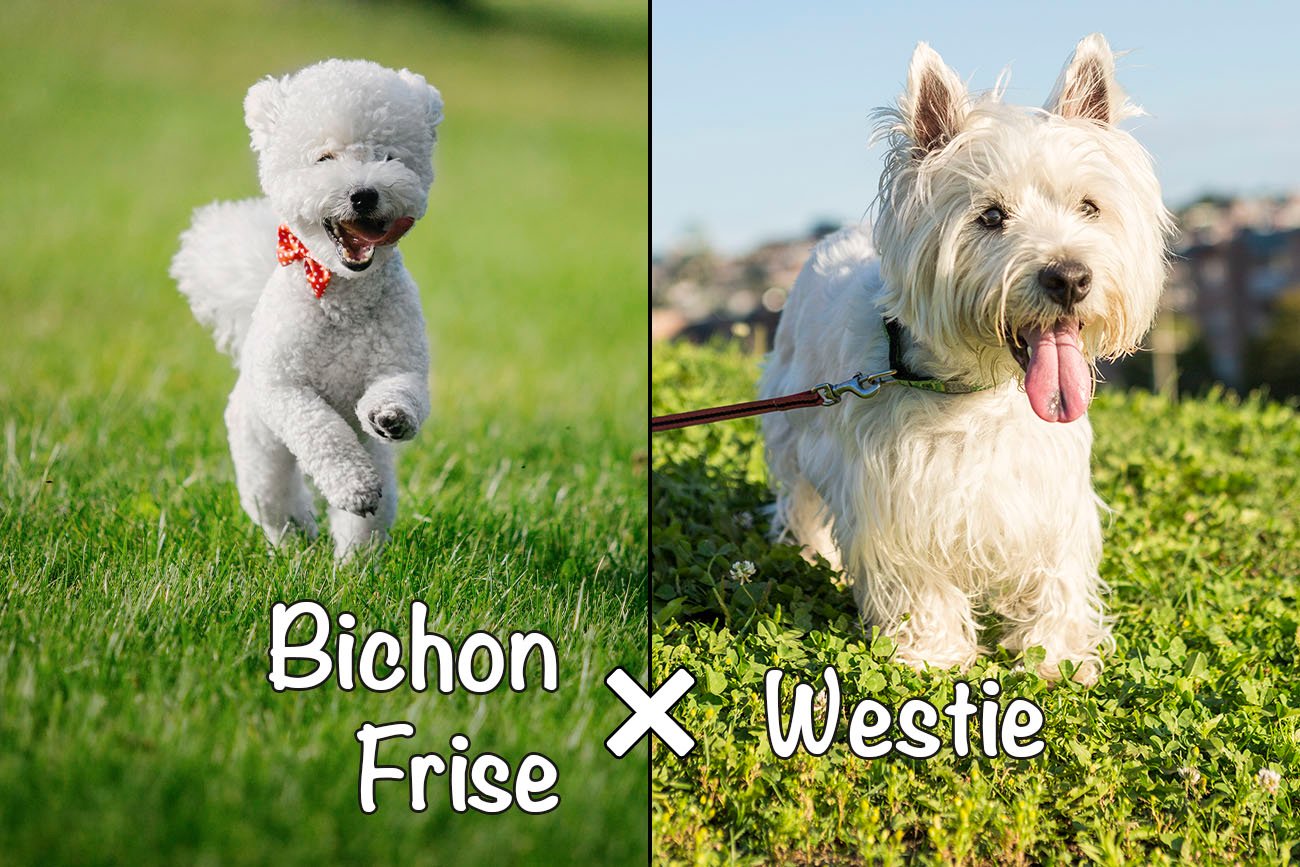 The pleasantly cheerful Wee-Chon is a crossbreed dog resulting from mixing the bichon frise and the West Highland White Terrier. This gorgeous fellow almost always has a magnificent white coat, but you may encounter the occasional surprise of a white and black pup born into the litter.

As a designer breed, the Wee-Chon is sure to snatch your heart, but not before you do extensive research into the breed. Before getting a pup, the various facets of study include their temperament, grooming and exercise requirements, and health issues.

We have covered all you need to know about the Wee-Chon to tell whether the breed fits your lifestyle.

How better to know your new pup than to educate yourself on their history? The Wee-Chon is a designer dog breed that came to be in the US, not more than a few decades ago. As with most designer dog breeds, the exact origins of this breed and the people responsible for breeding it aren’t entirely clear.

A better way to ease your curiosity about the hybrid dog is to learn the origins of the parent breeds.

The West Highland Terrier (Westie for short) originated from Scotland and hunted rats and other vermin. Westies have the courage and drive of a true terrier, and underneath the cute exterior is a tough dog.

Many believe the bichon frises found their way to France from Tenerife, brought there by French sailors. The bichon frise enjoyed a period of royal patronage in the 16th and 17th centuries, during which they gained favor among French and Spanish royalty. It is the first breed that comes to mind when thinking of bichon-type dogs.

The American Kennel Club doesn’t list the Wee-Chon as a recognized dog breed because they aren’t purebreds. However, designer dog clubs like the Designer Breed Registry (DBR) and the American Canine Hybrid Club (ACHC) acknowledge them.

Wee-Chons can be a 50-50 mix of the parent breeds, first-generation (F1) hybrids. They can also result from breeding a Wee-Chon and one parent breed, resulting in multigenerational crosses (F2, F3, etc.).

The Wee-Chon also goes by other names such as:

The Wee-Chon is unmistakably cute, as the hybrid inherited charming looks from the parents.  The dog stands at 9 or 10 to 12 inches at the shoulder and weighs around 12 to 20 pounds. The parent breeds don’t vary too much in height and weight measurements, so most Wee-Chons have a pretty constant size.

Wee-Chons are small but with a sturdy frame. They can either have the harsh coat of the Westie or a soft and fluffy outer coat typical of the bichon frise. Most Wee-Chons are white, but finding one with black markings is not impossible. Their majestic long and thick coats can either be curly or wavy.

Their plush toy exterior is well complemented with a triangular-shaped head and a relatively short and flat muzzle. Dark piercing eyes sit on their sweet-looking faces and are framed with ears that can be either erect or gently folded. They have dark noses and can have a carrot-shaped or arched tail.

Wee-Chons have a double coat that is relatively hypoallergenic, thanks to their parent’s genes. So, an allergy sufferer who has been eyeballing a canine companion but can’t quite make it work can give this mix a shot. It’s important to remember that no dog is entirely hypoallergenic. Either way, some trigger allergies less than others. 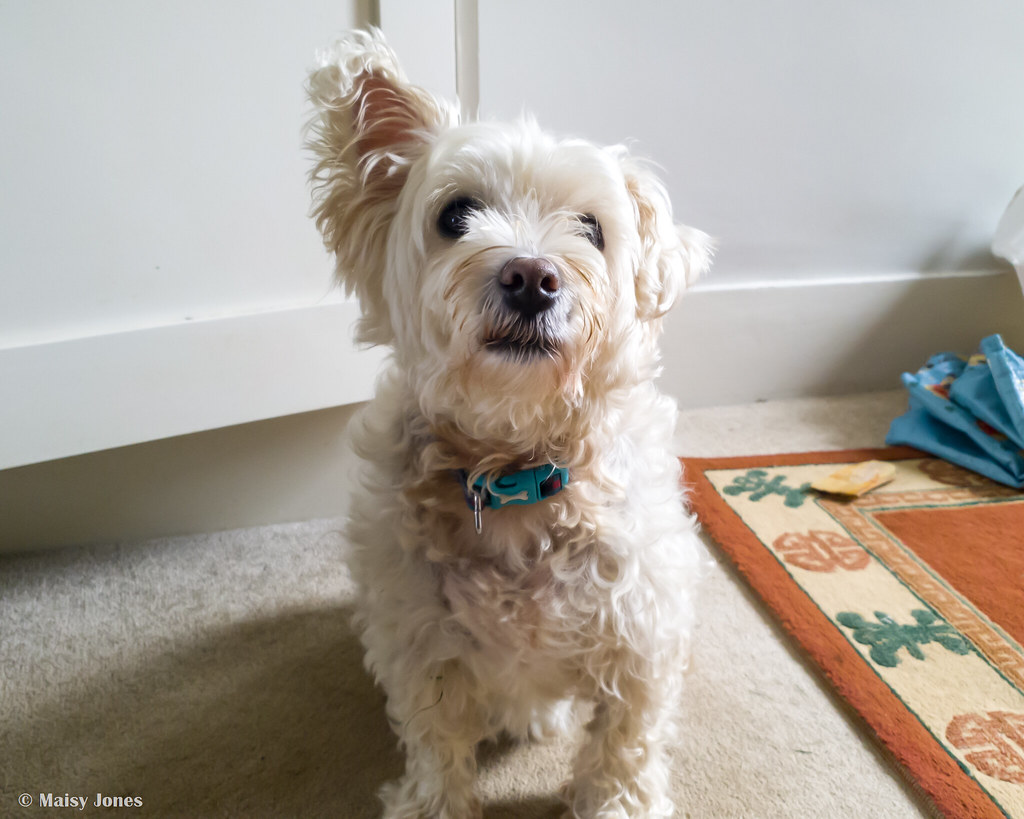 It’s vital to understand what it takes to maintain a dog because owning one is a responsibility as it is a pleasure.

Wee-Chons can have relatively high maintenance requirements, especially if their physical attributes lean more toward the bichon parent. Commitment will make this breed’s maintenance doable and enjoyable.

Wee-Chons, like every other dog, need a thorough grooming regimen to remain clean and healthy. Wee-Chons’ fluffy and luscious hair needs regular brushing at least twice a week for optimum coat health. Failing to brush their coats leads to knots and tangles, which can be painful for your dog during removal.

Proper coat maintenance doesn’t end at weekly brushing because consistent trims and baths are necessary. Invest in a dog shampoo for monthly washes because human shampoos can be too harsh on your pup’s skin and coat. Dogs have more sensitive skin, and dog shampoo is at a neutral pH that’s safe for dogs.

You can wash your pup when they’re dirty or smelly. Avoid over-bathing your dog when they don’t need it, as that would strip their coat of its natural oils. It’s best to use a pin brush for bi-weekly brushes and occasionally a slicker brush, which penetrates deep into the undercoat, removing trapped shed hair.

As small dogs, Wee-Chons are susceptible to dental problems because their teeth are closely packed in the mouth. Overcrowding of teeth means that these dogs are more likely to have plaque and tartar buildup that escalates into more severe conditions like gingivitis and canine periodontitis.

Brushing your pup’s teeth at least twice per week will keep periodontitis away, which affects close to 80% of dogs by age 3. It’s best to buy dog toothpaste because human toothpaste contains ingredients that can harm your dogs, such as xylitol and fluoride.

Wee-Chons need trimming around their eyes, ears, and paws when hair grows too long. Because of their white color, you might want to clean the eye area using eye drops to avoid tearstains. We recommend cleaning their ears weekly with an ear cleanser, ensuring you dry them thoroughly. Monthly nail trims keep the nails nice and short to keep cuddle time safe and comfy.

This playful pup has plenty of energy contained in that tiny body. Mental and physical stimulation is essential to prevent boredom that leads to destructive behavior like excessive chewing and barking. Due to their small size, minimal exercise will give them a safe avenue to expel bottled-up energy. Daily walks for at least half an hour, and a chance to play around the house will meet their energy needs.

Wee-Chons are adaptable to apartment living and don’t have high space requirements. In line with the terrier nature, these dogs can love to dig, meaning close supervision around gardens is necessary. Wee-Chons can do well in an apartment in the city and in the suburbs, where you’ll have a yard.

The Wee-Chon is a cheerful fellow that is loyal, playful, and highly affectionate. Their family-friendly demeanor means that the Wee-Chons will fit into the role of a canine family member marvelously. These pups love to snuggle and play, and they are good with children and the elderly alike.

As people dogs, Wee-Chons can suffer from separation anxiety if left alone for a long time. This hybrid will do best with a large family where they’ll have company most of the time. Close supervision is vital around young kids when they’re puppies. As small dogs, Wee-Chons are incredibly tiny and fragile in their puppyhood.

Wee-Chons with plenty of Westie in them can have a bit of an independence streak, making them somewhat stubborn; nothing adequate training can’t fix. As befits their terrier heritage, Wee-Chons can be vocal, making them excellent watchdogs. Proper training will show them when it’s okay to bark.

They get along nicely with other pets and animals, especially with proper socialization from an early age. Due to their small size, however, Wee-Chons can get a bit anxious around bigger dogs and exhibit violent behavior. To keep your Wee-Chon away from fights they can’t win, keep them leashed during walks and expose them to people and animals from early on.

Firm but patient training is essential for a well-mannered dog. To avoid Small Dog Syndrome, an umbrella term for unpleasant behaviors displayed by small breeds, train your dog to obey commands. Ultimately, this pleasant pup with a sunny disposition is sure to add joy wherever they go.

Wee-Chons are well endowed when it comes to the intelligence department. They are quite easy to train, especially with firm leadership and patience. Positive reinforcement in the form of praises and treats makes training enjoyable for your pup. Just don’t go overboard with the calories in the treats.

These dogs have a high drive to please, making training even easier. Some pups may be a bit headstrong, but some gentle correction will steer them in the right direction. Potty training, bite inhibition, and socialization are essential parts of your dog’s training routine during puppyhood.

Wee-Chons are hardy little dogs that live to the ripe old age of 12 to 15 years.

Despite being robust dogs, Wee-Chons can be candidates for niggly health problems, while some conditions are severe. Feeding your pup high-quality dog food that is protein-dense will ensure they get all the necessary nutrients. Some of the problems they are susceptible to include: 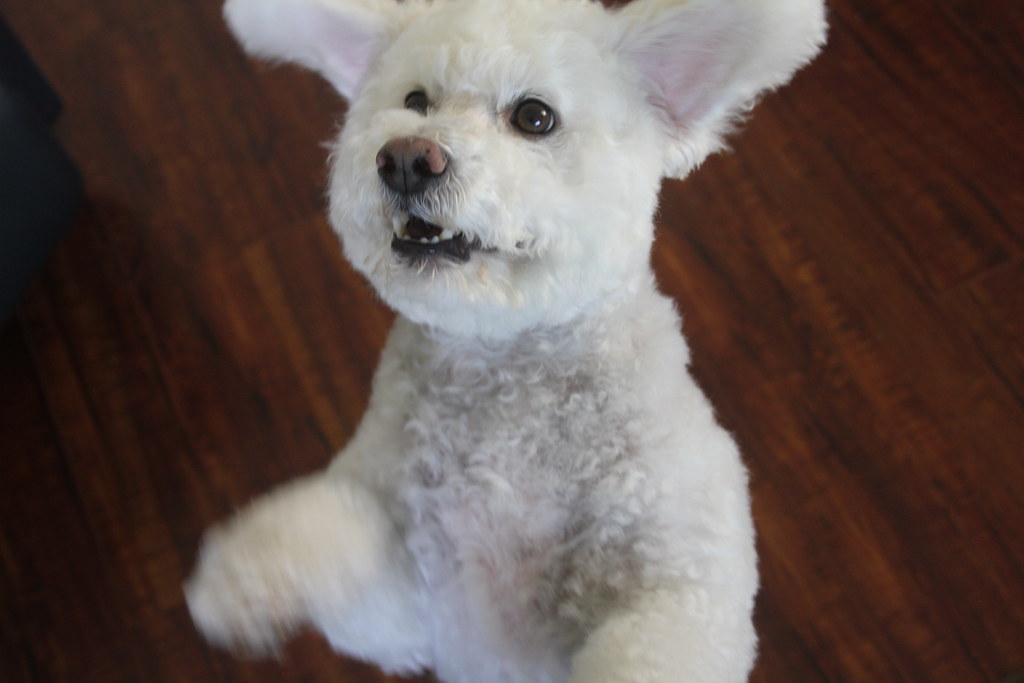 2 Fun Facts About the Wee-Chon

Lastly, here’s a couple of interesting things to know about the dog.

Is That Westie a Fox?

History holds that the Westie’s white color resulted from Colonel Malcolm of Poltalloch.

He accidentally shot a Westie, thinking it was a fox and was devastated. He advocated for selective breeding of Westies into the present white color for a distinct difference between the dogs and the game they hunted.

The Dog That Fell Out

Bichons frises were popular among royalty during the renaissance period. However, during the 19th century, bichons frises became too common, and noble interest in them waned.

After WW1, they became popular again as the lap dogs we know today.

Is Wee-Chon the Right Breed for You?

Wee-Chons are excellent companions, but they fit into the lives of the following groups even better:

The Wee-Chon is an adorable dog with a happy disposition. One keen look at these dogs will have you carrying them home in an instant. Consider getting one if you’re sure they’ll have company at home most of the time to avoid separation anxiety in your dog. Weekly coat and teeth brushing will keep your Wee-Chon in optimum health.