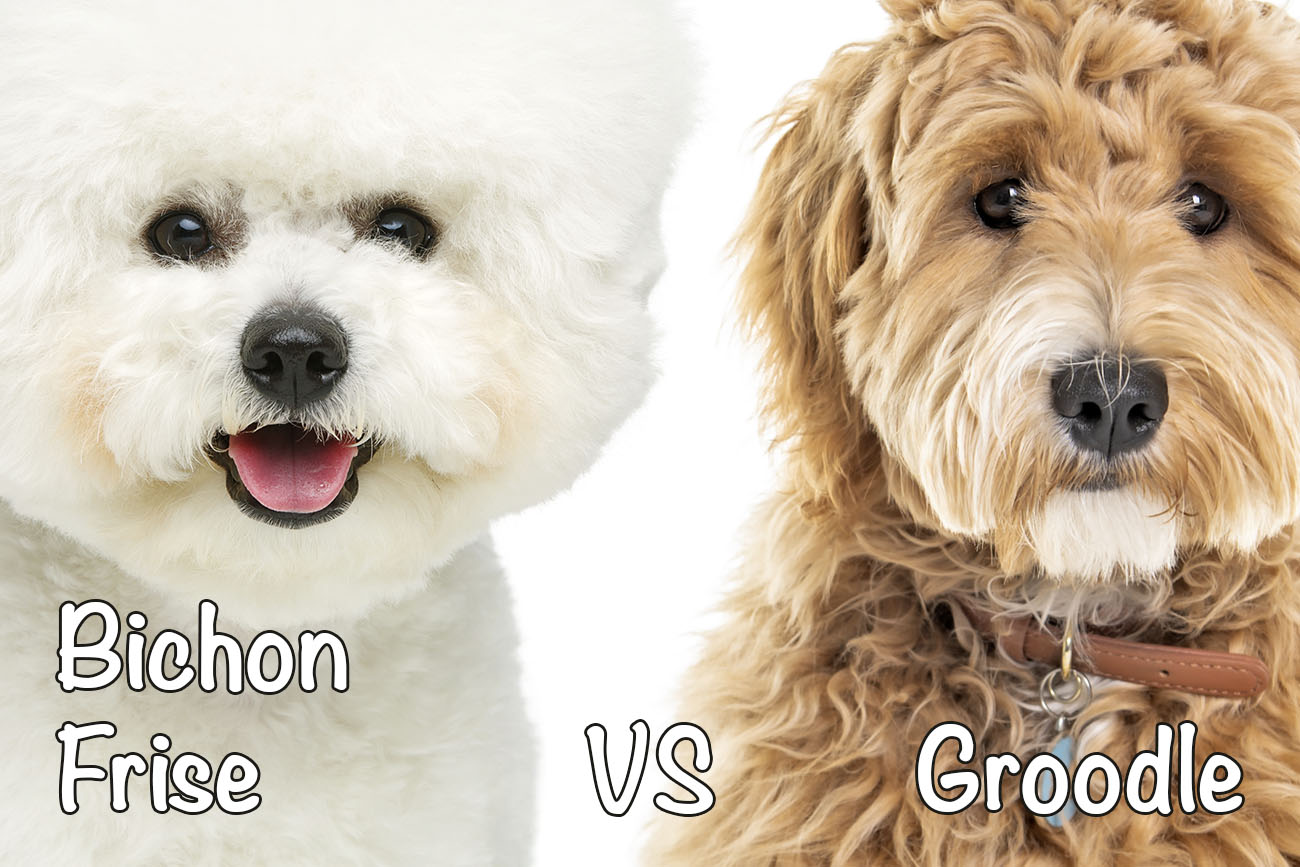 Both bichon frise and goldendoodle breeds are known as “companion” dogs. Both are playful, intelligent, and affectionate, but there are also key differences between the two, such as their origin, appearance, life span, and availability.

This article will help you see these differences and the significance between the two breeds so you can better understand which would be the best fit for your home.

Let’s start by looking at the bichon frise and goldendoodle side by side.

The bichon frise originated from crossing small, white-coated dogs with Barbets. The name “bichon” originated from “Barbichons,” the original name for the two crossing breeds. Within the Barbichons (bichon for short), there were four types of breeds, one of which was called the Tenerife. Tenerife is said to be the original origin of bichon-type breeds. It’s believed that the Spanish brought these dogs to the Canary Island of Tenerife and then in the fourteenth century, Italians brought them back to the continent where they began to be domesticated pets for the upper-class.

The goldendoodle originated in Australia from breeding a golden retriever and a poodle. Originally, the labradoodles were first bred in the early 1990s and became popular around that time. Wally Conron is credited with the idea of breeding a poodle with an allergen-friendly breed. Then later down the road from this concept, came goldendoodles. Originally, goldendoodles were bred as guide dogs to assist those with disabilities or impairments.

Bichon frises and goldendoodles come from two contrasting backgrounds. One was bred for mere pleasure and ownership status, while the other for need. However, both serve the same common purposes today as companion dogs.

Both bichons frises and goldendoodles have curly hair typically, however, goldendoodles can sometimes have wavy or smooth hair also. In addition, bichons frises have neutral, light color coats such as white, apricot, and cream, while Goldendoodles could have black, gray, white, brown, red, or even yellow. Both need to be groomed about every 3 – 4 weeks because of their coats. Both are very allergy-friendly and not big shedders.

A bichon frise should be fully grown at around 6 – 12 months of age. You will notice constant weight gain up until about 10 months. Typically, you will want to switch your bichon frise to adult food around the 6 months mark as well. Social development takes a little longer than physical development, as a bichon frise breed will reach full mental maturity at or around 15 months. In addition, their lifespan is between 12 – 15 years.

Goldendoodles typically reach adulthood between 6 – 12 months as well. In contrast, a goldendoodle will take between 1 – 7 years to reach mental maturity. Their lifespan is typically between 10 – 15 years.

Bichons frises and goldendoodles are very similar in temperament.

Both are known to be affectionate, playful, friendly and intelligent. Both get along well with other dogs most often. The only main differences are that goldendoodles will have more energy than bichons frises and will be less sensitive as well.

Goldendoodles tend to be easier to train than bichons frises. It takes some time and patience when training both breeds, but in the end, they are very intelligent and will pick up quickly and thoroughly.

Both breeds are ideal house-pets who are gentle, non-excessive barkers that will be good watchdogs over your home.

Bichon Frise vs. Goldendoodle: Which Should You Get as a Pet?

Goldendoodles and bichons frises are both family-friendly pets. Both are apartment-friendly, although you may want to consider the size of your apartment and base your decision accordingly, as one breed can be significantly smaller than the other.

In addition, goldendoodles are the slightly better choice for families with kids in the home. Bichons frises are super friendly, but they have a higher tendency to bite or nip when playing. However, at the same time, the bite force of a bichon frise tends to be much smaller and weaker than that of a goldendoodle. In addition, goldendoodles can get very excited and have a higher tendency to herd when playing.

Overall, both breeds are very gentle and friendly and therefore would be a great pick for a home with children.

Both are very stranger-friendly, which is helpful if you’re someone who has company over often. Both do well with other dogs or cats in the home, however bichons frises do slightly better than goldendoodles in this regard. Both are fairly healthy breeds with no significantly common health problems. In addition, both are hypoallergenic which is ideal for someone who has bad allergies.

The only downside to these breeds is that they are not ideal for office environments. If you are someone who goes into the office regularly and needs to bring your pup along, I would not recommend either of these breeds.

Overall, the bichon frise and goldendoodle breeds are exceptional dogs for any home. They are friendly, manageable, trainable and good in most any environment.

Although they come from different backgrounds, they fill a similar companion role now. There are slight differences between the two breeds, but really you can’t go wrong with choosing either one – it just depends on your situation and preference.