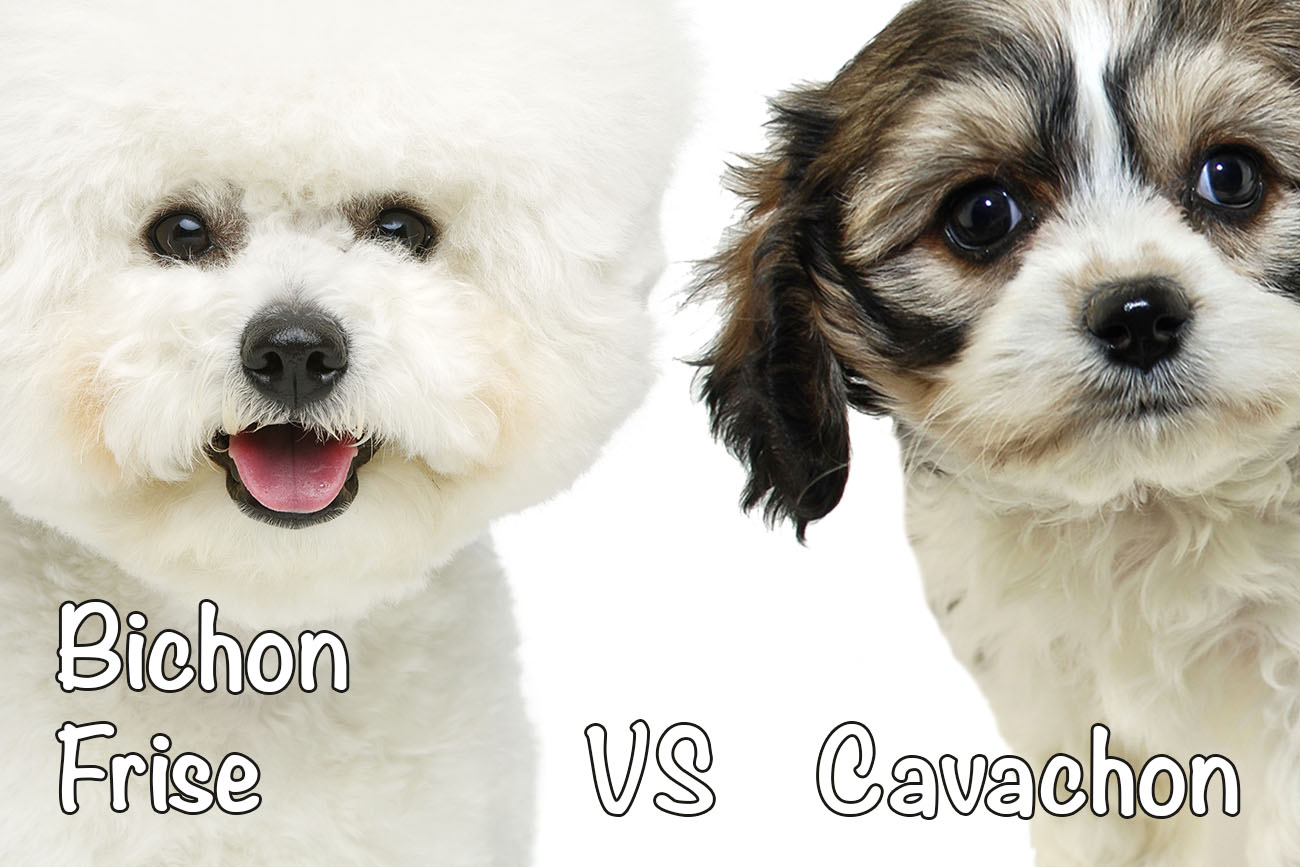 When it comes to choosing between bichon frise and Cavachon, nobody can blame you for not being able to decide easily. As adorable, Disney-eyed balls of fluff, these two breeds will soften the hardest of hearts.

To make the decision, you will need to look at the differences and similarities between the two breeds to see which one is the best fit for your home.

With that, let’s look at the two breeds side by side.

The bichon frise is a descendant of the barbet, a French water dog. In fact, “barbichon,” means “little barbet,” and this is likely where the name bichon is derived from.

Bred as smaller companion dogs from the hunting water dog that is the barbet, the bichon-type breeds first emerged in the 11th century. They moved from France to the rest of Europe and then to colonized countries in Africa and South America. Many different kinds of bichons were developed, including the Havanese and the Bolognese.

The bichon frise, in particular, was developed through the bichons that arrived in Tenerife, in the Canary Islands. They later returned to mainland Europe.

Although cross-breeding probably happened before, the designer breed of the cavachon, a mix between the King Charles Spaniel and the bichon frise, only started formally in 1996. They have grown in popularity since and are sometimes called the Cavalier-Bichon or Bichon-King Charles.

The bichon frise and the cavachon are both small gorgeous little dogs with large, liquid brown eyes.

The bichon frise stands between nine and eleven inches tall at the withers and weighs between seven and twelve pounds. The bichon frise may be white, white and cream, white and apricot, or white and buff. It has a thick, soft undercoat with the signature cotton ball look and deep dark eyes with a cute button nose.

As a mixed breed, there is greater variation in the cavachon size and looks. They usually weigh between fifteen and thirty-five pounds and stand between twelve and thirteen inches at the shoulder. However, they can be both smaller or larger.

Most cavachons are either pied, cream, or white. That said, some of them do have solid colors. They usually have a medium-length coat, but some do have longer coats. Their coat type depends on which parent breed they take after. Therefore, they may have the smooth single coat of the cavalier or the thicker double coat of the bichon frise.

In general, the cavachon does not need as much grooming as the bichon frise, only a good brushing two or three times a week and the occasional visit to the doggy parlor. Both breeds need attention to be paid to their dental, ear, and eye hygiene, as well as regular nail clippings.

In general, mixed breeds are considered healthier than purebreds. Nevertheless, the cavachon can still inherit diseases from either its bichon frise or Cavalier King Charles Spaniel parent. This makes them vulnerable to health issues such as certain cancers, patellar luxation, or cataracts.

Both the cavachon and the bichon frise are incredibly playful and loving. They are outgoing and friendly, although they will benefit from early socialization.

Both breeds are highly attached to their owners and may suffer from separation anxiety. Therefore they should not be left alone for long periods. Positive place training and a decent amount of exercise can help them learn to cope better on their own, but they should not spend most of the day home alone.

The cavachon might bark a bit more at visitors but are generally extremely friendly with children, strangers, and other animals. The bichon frise might be more reserved with strangers and should be properly socialized with other dogs.

Both are good apartment dogs, and the cavachon, in particular, loves to nap. Nevertheless, they both need a good half hour or so of exercise a day. Neither the cavachon nor the bichon frise should live with tiny children or much larger dogs, as these could accidentally hurt them.

The bichon frise and the cavachon are both intelligent and trainable. However, training should start at a young age. These are sensitive dogs that will not respond well to punishment or harsh training methods, so consistent positive reinforcement is the best way to get results.

Because these are exceptionally gentle breeds, they also do well as therapy dogs.

Although they are both excellent apartment dogs, the cavachon might be more prone to barking if they inherit this trait from their Cavalier King Charles parent. So while friendly with strangers, the cavachon may make more of a fuss if somebody comes to visit.

While the bichon frise is a low shedder and fairly hypoallergenic, the cavachon may inherit its coat from the Cavalier King Charles. This means the cavachon might not be a good choice for allergy sufferers.

Neither breed should be subjected to extreme heat or cold. Always monitor the temperature of their environment.

Lastly, if the cavachon takes after its Cavalier King Charles parent, it may be easier to potty train than the bichon frise.

Bichon Frise vs. Cavachon: Which Should You Get as a Pet?

The following may help you decide between a Bichon Frise and a Cavachon.

Get a Cavachon if:

As the cavachon is bred from the bichon frise,they have many qualities in common. The cavachon may even be prone to more genetic problems, as it can inherit genetic diseases from both its Cavalier King Charles Spaniel parent and its bichon frise parent.  Nevertheless, responsible breeding may be healthier.

The cavachon also comes in more coat colors and lengths but can be more likely to bark and annoy the neighbor. In short, both dogs make ideal companions to people who are frequently at home and ready to spend most of the day with them.