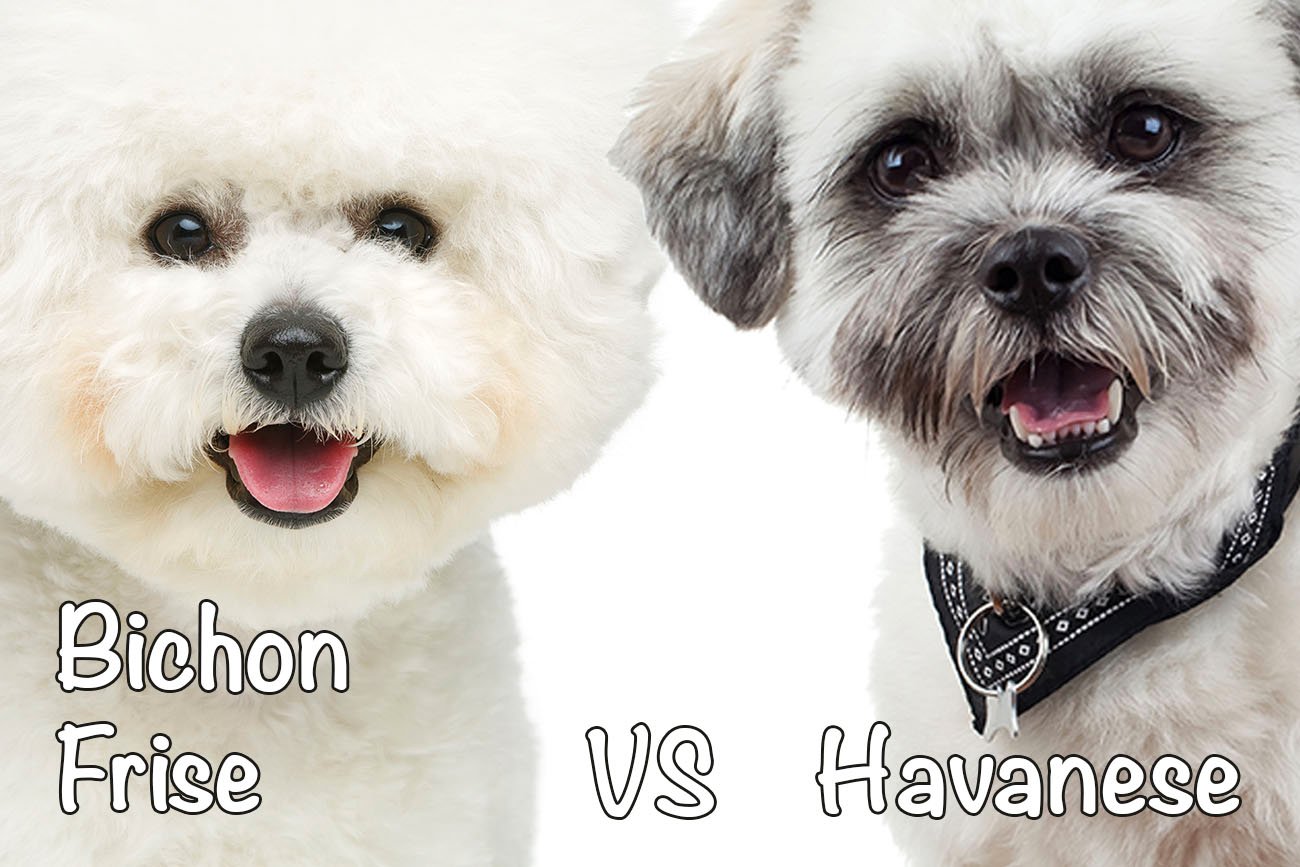 The bichon frise and the Havanese share common ancestors, and so they have much in common. Suppose you’re looking for a small companion breed that does well in small spaces and is relatively hypoallergenic. In that case, you might find yourself stuck choosing between the two.

Although the Havanese and the bichon frise are similar, there are differences between the two breeds that can help you choose the dog that is right for you.

With that, let’s dive into the differences (and similarities) between these two cute breeds.

The bichon frise and the Havanese are both bichon-type dogs. They originate from the barbet or French water dog. The name “bichon” probably comes from the word “barbichon,” which means “little barbet.”

Little bichon-type dogs emerged in the 11th century, where they became popular amongst royalty and the aristocracy. They began in France and quickly spread across Europe. From there, they were taken to the colonies in the Americas and Africa, creating different types of Bichons.

Dogs that arrived in Tenerife in the Canary Islands via Spain became known as the now-extinct bichon Tenerife. This dog was popular amongst sailors and eventually made it back to the courts of Italy, Spain, and France. Although they lost popularity after the French Revolution, a society in the 20th century eventually created the bichon frise we love today.

On the other hand, the Havanese likely also stems from the bichon Tenerife, or the Spanish bichon-types. Only these dogs were taken by Spanish settlers to Cuba, where they became the chosen dogs of the aristocracy.

In Cuba, they developed their signature silky coat that helped them cope with the heat. After the revolution, Cubans fled to the USA, and some managed to bring even their dogs. These would become the foundation stock of the Havanese we have today.

The bichon frise is slightly bigger on average than the Havanese. Typically, the bichon frise weighs between ten and twenty pounds and stands between nine and eleven inches at the shoulders.

The Havanese usually weigh between seven and thirteen pounds. They typically stand between eight-and-a-half and eleven-and-a-half inches tall. They are usually a bit longer than tall, while the bichon frise is a more square, sturdy dog.

The bichon frise has a thick undercoat and a curly outer coat that gives them their signature powder puff look. Their coats may be white, white and apricot, white and cream, or white and buff. They are usually square, fairly robust little dogs.

On the other hand, the Havanese has a long silky coat with a tail that curves over their back. They are allowed to be any color, but black and tan, blue, silver, and chocolate are some of the most popular.

Both breeds require a lot of grooming and coat maintenance and should have their teeth cleaned regularly. Their weight should be carefully managed, and their nails clipped at least once a month. Particular attention should be given to their ear and eye hygiene.

Both the Havanese and the bichon frise are relatively healthy and long-lived little dogs. They both tend to live between twelve and fifteen years. They reach adolescence around five months and sexual maturity around eight. Typically, they are fully grown between eight and ten months and mentally mature around eighteen months.

If they are bought from a reputable breeder who tests for hereditary diseases and are given proper care throughout their lives, both the Havanese and bichon frise can live into their late teens. Some reach as old as seventeen or eighteen.

For more about the life span of a bichon frise, check this article.

The bichon frise and the Havanese have remarkably similar temperaments. They are both friendly, outgoing, and social creatures. They are singularly devoted to their owners and tend to be anxious if left alone. They also tend to be quiet and are not known for excessive barking.

Between the two, the Havanese are perhaps a bit more clownish and thrive in an environment where they can show off. This can include dog dancing, agility, or obedience. But as a toy breed, care should be taken that they do not injure themselves accidentally. While the bichon frise can enjoy the same sports, they are perhaps a tad more sensitive.

They are also naturally tuned in to people’s emotions, and so they make fantastic therapy or emotional support animals when given the proper training and socialization.

The bichon frise and the Havanese are both naturally inclined to understand their humans and are deeply sensitive to emotions. These are velcro dogs, after all, who do not like being parted from their pet parents for a second.

Their close bond with humans makes them perceptive and also quick to figure out how to get their own way. Many bichon frise and Havanese owners report their dogs training them more than they train their dogs! Their intelligence often has them two steps ahead of their owner.

That said, both breeds are quite trainable and easy to please. The Havanese, in particular, love learning tricks, but the bichon frise can be a little more stubborn. They will benefit from short training sessions and loads of treats and encouragement.

The Havanese and the bichon frise are both great dogs for small spaces such as apartments. They only need moderate amounts of exercise and playtime. Both breeds are low shedders and less likely to cause allergies.

The Havanese tend to gain weight fast, so special attention needs to be paid to their diet and exercise. The Havanese is better suited to a warm environment because of its light, silky coat. At the same time, the bichon frise can tolerate cold a bit better due to its dense double coat.

Both breeds need a consistent and positive potty-training regime. Patience is key!

Bichon Frise vs. Havanese: Which Should You Get as a Pet?

If you are still stuck between getting a bichon frise and a Havanese, the following can help you decide. Alternatively, you can also consider getting a Havachon, a mix between the two.

Get a Havanese If:

Since the bichon frise and Havanese both descend from the bichon Tenerife, they have many qualities in common. They are both singularly devoted to their owners and hate to be parted from them. They are also quiet dogs and are excellent for small spaces such as apartments.

The bichon frise is slightly more square with a coarser, curly coat, while the Havanese has its signature long silky hair. The Havanese also has a greater range of colors and is slightly longer than high.

These are both excellent choices as companion dogs and will adapt well to any home where their owner is home most of the day.

2 thoughts on “Bichon Frise vs. Havanese: Which Breed to Get?”