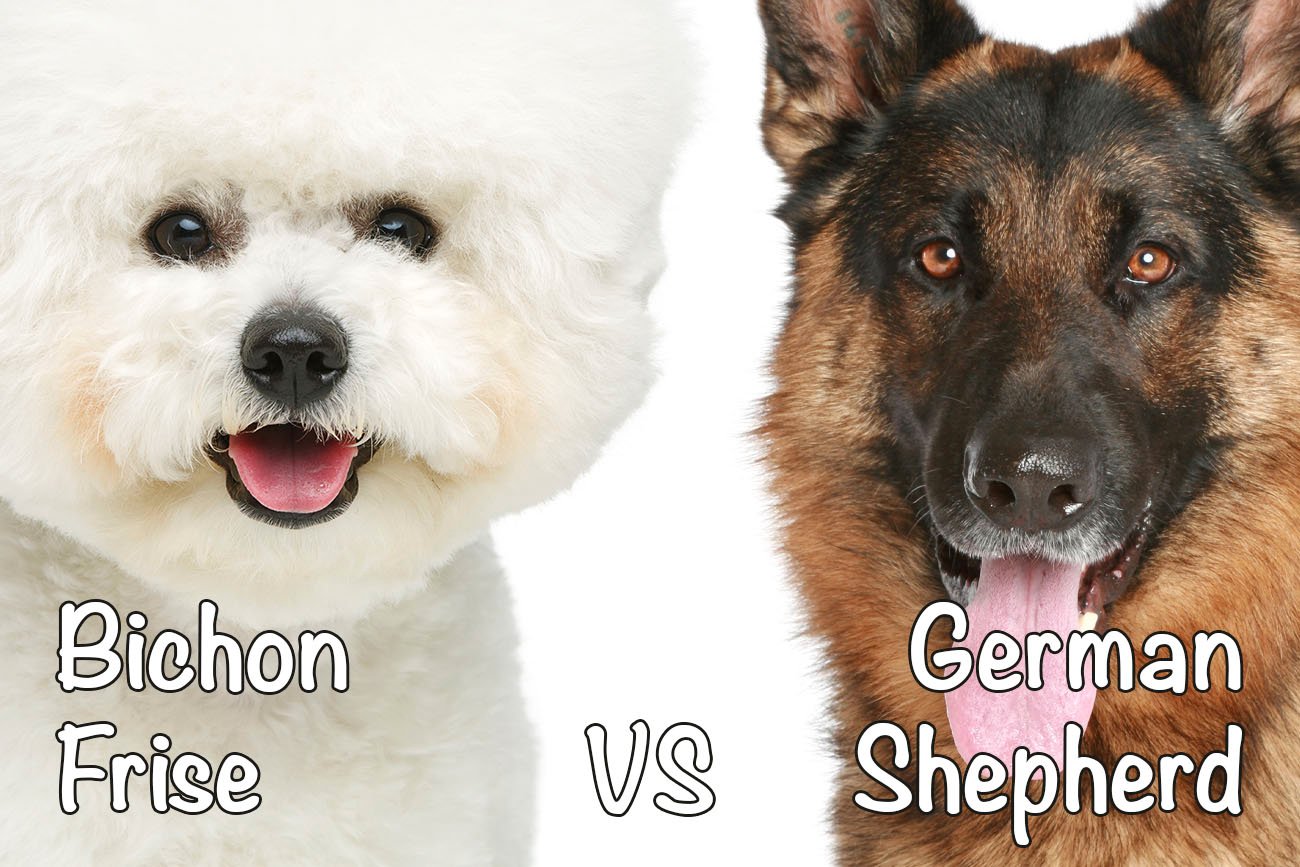 Are you trying to decide between the bichon frise and the German shepherd? These dogs share some similarities but they are very different in several ways – most obviously their size.

Read on to find out which is the perfect pooch to suit your lifestyle.

First, let’s first take a look at the two breeds side by side.

Learning about the two breeds’ origins will help you understand some of their main traits.

The German shepherd, or GSD, is probably most widely known as a service dog, often working with the police and the military. However, as the name suggests, their origins actually go back to 19th century Germany where they were bred to herd sheep.

You may also know this dog as an ‘Alsation.’ This is because after World War I, the GSD’s official name was changed in the UK to ‘Alsation Wolf Dog,’ then simply to ‘Alsation.’ The decision to drop the word ‘German’ was due to fear that it could harm their popularity being associated with the enemy nation of Germany at the time. This name remained in place right up until 1977, when it was changed back to its original official title.

Inclusions of the German shepherd in popular culture has helped to increase the German Shepherd’s popularity. Firstly with the arrival of Rin Tin Tin to people’s screens in the 1920s, then as Batman’s sidekick in the original comics, and more recently in the film I am Legend.

Today, she is much-loved as a loyal and loving pet. According to the AKC’s registration stats from 2021, the German shepherd is the 3rd most popular choice of dog breed in the US today.

Bichon frise literally means ‘curly haired small dog.’ Bichons descend from the ‘Barbichon’ family of dogs, along with the Maltese, Bolognese, and Havanese, which are thought to descend originally from the Barbet, a large water dog.

Bichons frises are often mistaken for a French breed, but they are actually thought to have originated in Spain, where Spanish sailors then introduced them to Tenerife in the Canary Islands.

First used as sailing dogs, they later grew popular with wealthy, upper-class Europeans and nobles, becoming pampered companion dogs. They were often depicted in portraits of the royals and the Spanish painter Francisco de Goya included bichons in many of his pieces.

Today, they are a popular breed of small dog, particularly with families, due to their loving and affectionate natures.

Both dogs have double coats. Bichon frise has a long, curly top coat with a soft undercoat, giving it a cute powder-puff appearance, while the German shepherd’s coat is usually medium length, with a wiry top coat and a soft undercoat. The German shepherd is a heavy shedder, while a big advantage of the bichon frise is that they are a very low-shedding breed. This is great news if you have allergies or you don’t want to be getting out the vacuum every other day. Both breeds do require routine grooming and should be brushed at least 3 times a week.

As a large dog, the German shepherd’s lifespan is shorter than the bichon frise’s, averaging between 7 – 10 years, while the little bichon frise can live up to 15 years.

As for the transition from puppy to adulthood, large breeds tend to take longer to mature. The German shepherd is not considered to reach a full level of growth and maturity until 2 – 3 years old, with males maturing later than females. This means that a German shepherd owner must be dedicated to training their dog and continue reinforcing this training throughout this time. It will also mean an incremental exercise routine over this 2 – 3 year period, starting with short lead walks, until the dog’s bones are fully fused.

The bichon frise, on the other hand, is generally fully grown and considered an adult at 10 – 12 months old. This will mean that once trained, you can begin off-lead walks and runs earlier than for a German shepherd, as well as an earlier transition to adult food than for the German shepherd.

Both dogs are considered to be affectionate with their owners and good with young children, making them good choices as family pets if correctly trained and socialized. However, they have different needs in terms of training and socialization.

German shepherds are usually very loyal and protective by nature and tend to be wary of strangers and other dogs. This makes them great guard dogs, but if you want a German sheperd as a family pet, you must train and socialize her with people and other dogs consistently from puppyhood.

The bichon frise is sweet and happy by nature and tends to be much more open and friendly towards other dogs and strangers from the get-go, so socialization training is usually a lot easier than with the German shepherd.

Both dogs enjoy spending quality time with their owners and are very playful, lively breeds.

Originally bred as working dogs, the German shepherd is a very high-energy breed who needs at least 90 minutes of exercise spread throughout the day. Bichons frises have a more moderate energy level, so about 30 minutes a day should be enough.

The German shepherd’s high intelligence and working roots make it a dog with whom consistent training can yield excellent results. The bichon also has the smarts and they can learn and perform new tricks quickly, but it’s important to bear in mind that they respond well to a soft approach as they are somewhat sensitive little pooches.

Bichons frises are, however, notoriously difficult to housetrain. This is probably due to their small bladders plus the fact that they are not the type of dog who will simply do it without any motivation. Potty training a bichon frise will take a consistent regime and positive reward-based training.

While both breeds are playful and need mental stimulation, the German shepherd particularly requires a good brain workout. It’s important to teach them tricks and play games to keep them stimulated and happy.

Bichon Frise vs. German Shepherd: Which Should You Get as a Pet?

Should I Get a Bichon Frise?

These sweet-natured pooches are ideal for novice owners as they are fairly easy to train and socialize. If you’re someone with allergies or you can’t stand to see hair in your carpet, the hypoallergenic, low-shedding bichon frise is a great option. They’re adorable, loving pets who are adaptable to living in many environments including apartments due to their small size and moderate exercise needs. They’re great companions and family pets who tend to be friendly to all: children, strangers, and other dogs alike.

Should I Get a German Shepherd?

The German shepherd is a better option for the more experienced dog owner who is willing to put in the time and dedication to training and walking their dog, as they require more consistent training over a longer period of time and can be less sociable with other dogs and people by nature. German shepherds suit living in homes with more space, preferably with a garden, and particularly with a family with children. They are loyal, loving pets when properly trained and socialized who will wow you with their intelligence and delight you with their companionship and playfulness.