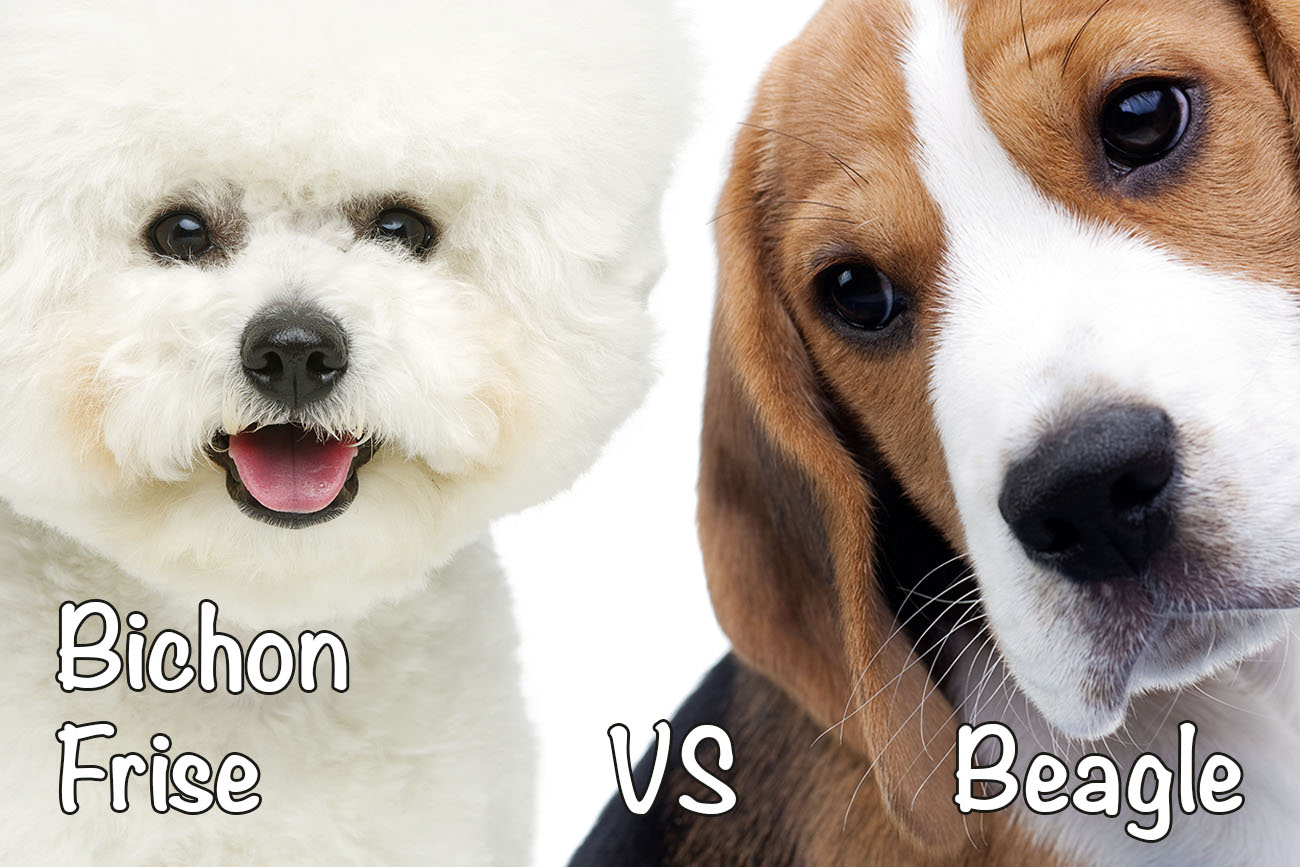 However, both are known for their adorable faces and loyal personalities and are now popular pets. In this article, we will compare the two to see which is the best suited for you and your family.

Even if you’ve never owned a dog, you’ve probably heard of the bichon frise and beagle. They aren’t very different when you think about it, but they each have their little character quirks.

Bichons are small white dogs that belong to the Barbichon breed family. It is believed that the modern development of these ancient breeds began in Tenerife of the Canary Islands as companion dogs. They are a mix of Barbet, poodle, and water spaniel breeds.

Bichon Tenerife, an ancestor of the modern bichon frise, was so beloved by sailors on the island. Later, the French nobility became quite fond of them because of their non-shedding qualities.

Meanwhile, the beagle was developed as a hunting dog in England during the Middle Ages. It’s thought that it was bred from other hounds such as the talbot hound and harrier, although its exact origins aren’t clear. Beagles were originally bred in packs to hunt rabbits, hares, and quail.

In England during the 1500s, Queen Elizabeth I kept packs of beagles for hunting purposes. She also enjoyed watching them perform tricks during her lavish banquets.

Bichons frises are small dogs with compact bodies and slightly round heads with floppy ears, black eyes, and short noses. As a non-shedding breed that will not shed its hair except under unusual circumstances, they have long and curly hair with a cottony texture. Also, their tails curl over their back.

Bichons frises come in several colors, including white, gray, cream, apricot, and buff. It’s common for them to weigh between 10 and 15 pounds. In addition, they measure between 9 ½ and 11 ½  inches in height when fully grown.

On the other hand, beagles are sturdy, medium-sized dogs that look like smaller foxhounds. They have long ears, large noses, and bodies that are low to the ground. Beagles are available in two sizes. The first group comes in at 13 inches in height or less. The second group stands between 13 and 15 inches tall.

Beagles can be found in various colors, although tri-color patterns are most common. Black, white and brown are the usual colors on a beagle’s coat, but tan markings can also be present. They weigh anywhere between 20 and 30 pounds.

Beagles have an average lifespan of 10 to 15 years. At 18 months old, a beagle is considered an adult, and at 9 years old, a senior.

Bichons frises usually live for about 12 to 16 years. After being a puppy, they transition out of puppyhood and into their first adult stage, usually around 10 months. Finally, they are considered “seniors” when they reach 10 years old.

When it comes to temperament, the beagle is a playful and social dog. While they are independent-minded dogs, they still love to romp around with other canines. Beagles are excitable, curious, and gentle dogs who make very good companions or family pets if you have the time to give them plenty of exercise and attention.

Beagles are active dogs who enjoy getting out and doing things. They are extremely self-assured and confident in their abilities. In addition, they’re not afraid to take on new challenges or go after an interesting scent without any hesitation. This means its important to keep a Beagle on leash if you are in an open area and aren’t confident in their recall.

Meanwhile, bichon frises are spunky, friendly, and full of energy. Pets and humans alike enjoy spending time with them, and they thrive in social situations. They love to play fetch, snuggle up with their owners, and be the center of attention.

A loving dog, bichons frises like being spoiled but will also happily roughhouse and play games of fetch and tug-of-war. Although they get along well with others, they can be wary of new people. If you have neighbors or frequently take your dog out in public, be prepared for them to bark at strangers.

Beagles are often written off as not-so-smart, but they are much smarter than they seem. Some people think they’re not trainable because they’re stubborn, but this is not the case. Beagles can be just as well-trained as any other dog breed.

They’re great at learning new things and willing to learn. They also love food and will learn for treats. But, as they were bred as independent hunting dogs, they do have a mind of their own. Training can easily be interrupted if they spot a squirrel or smell something more interesting.

Similarly, bichons are intelligent dogs and extremely empathetic to their owners. However, they can be a little stubborn and don’t enjoy repetitive tasks. This means they aren’t always as trainable as some other breeds. But short sessions, consistency, and positive reinforcement go a long way.

Another factor to consider are their exercise needs. The bichon frise is a non-sporting toy dog, while the beagle is a hound. Both breeds require daily exercise, but the beagle will typically require more than the bichon frise.

The beagle’s exercise needs align with those of most other hound dogs. Because they were bred to work in packs for long periods, this active breed requires an hour or more of daily exercise, plus plenty of toys and playtime. The bichon frise, on the other hand, usually requires just 30 minutes to an hour of exercise every day.

Further, both breeds thrive when included in family activities and on outings with their owners. In addition, they often enjoy running off-leash in fully fenced areas like dog parks.

Aside from exercise, you must also consider their grooming needs. For example, bichons frises are renowned for their extensive coat care needs because they have long, curly hair that must be brushed every day and trimmed every 3 months.

To keep your bichon frise happy and healthy, it’s important to give them regular grooming. Some bichon frise owners will also have their dogs professionally groomed every six to eight weeks. On the plus side, bichons frises are usually hypoallergenic dogs, which is good for allergy sufferers.

Beagles have minimal grooming needs by comparison. They have soft, short coats that shed moderately year-round and heavily seasonally, so beagle owners will want to brush their coats once or twice a week and bathe them about once every three months. These are not hypoallergenic dogs.

Because beagles are known for their floppy ears, their owners will also want to check their ears for signs of inflammation or infection regularly.

Finally, Beagles enjoy more space and have a notoriously loud, ringing bark that can disturb neighbors. So they are not ideal for apartments.

Bichon Frise vs. Beagle: Which Should You Get as a Pet?

Keeping all of the above in mind, which one should you go for?

Get a Beagle If:

When deciding between a bichon frise and a beagle as your pet, there are many factors you should consider. However, if you’re like most pet owners, you’ll want to keep things relatively simple.

The bichon frise and the beagle are loving, affectionate breeds that will happily be your lifelong companion. But, ultimately, the decision is up to you based on what you’re looking for in a pet and what personality traits you find most appealing.