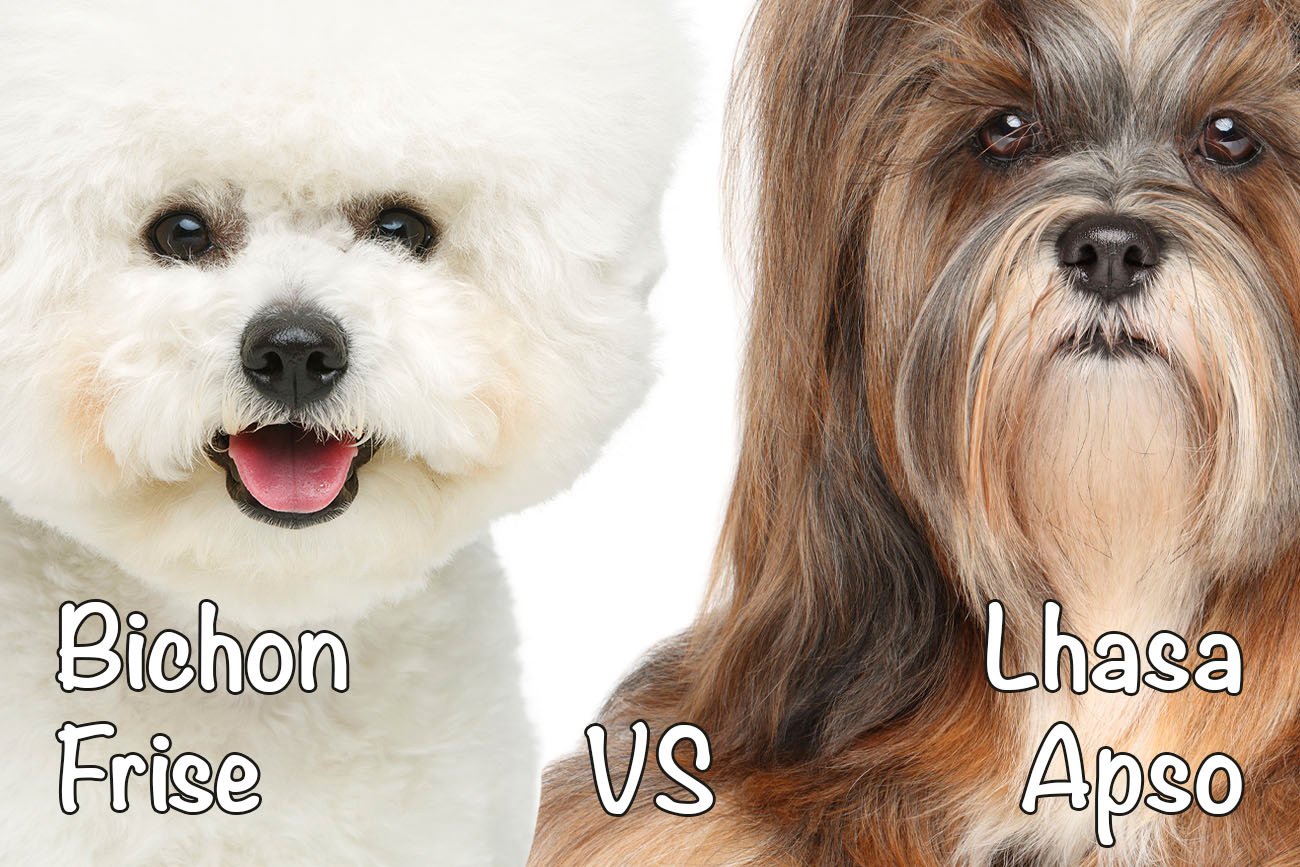 If you want a friendly companion, both Lhasa apso and bichon frise are adorable dogs who love spending time with their family. These pups love to be pampered and are friendly with other pets and family members when properly trained. Despite these similarities, there are many differences between these two breeds.

Below, we’ll discuss everything you should know before making a decision.

Let’s start by comparing the two breeds based on a number of different criteria.

Bichons frises were introduced to Europe in the 14th century, and they quickly became the favorite breed for royal families thanks to their merry or even goofy temperament. They are one of the several bichon-type breeds of dogs.

On the opposite side of the spectrum, Lhasa apso’s origin has nothing goofy about it – in fact, they appeared in 800 A.D. and were considered sacred dogs. They were companions and watchdogs at Tibetan monasteries – “Lhasa” is actually Tibet’s capital, while “apso” has an unknown origin. Some people consider that it is derived from the word “rapso”, which means goat, an indication of their appearance.

Both breeds are similar in size – about 11 to 12 inches in height and a maximum of 18 pounds, but similarities end here.

Bichons have a puffy, white double coat, which is soft to the touch but wavy or curly. Sometimes, the coat may be in other colors too, including cream or gray. Bichons have a black nose and eyes, with a body that’s slightly longer than their height.

Despite their small height, Lhasa Apso is not a fragile dog. It was bred in very unfriendly climates in the Himalayas, where nights often come with negative temperatures. This pup has a sturdy, muscular body, able to handle the rocky landscape and icy slopes. As it was a watchdog bred to watch Tibetan monasteries placed at very high altitudes with lower oxygen levels, Lhasa apso dogs have large lungs and a broad muzzle, so they can breathe easily.

The Lhasa apso’s coat is very different compared to a bichon’s and it may be white, tan, or black, among other colors. It is weatherproof, so it remains warm during negative temperatures and keeps the body cool during blazing sun.

The long hair around the eyes and nose has a special purpose, too: to keep its eyes protected from dust. Thus, while the sensitive bichons frises were bred as lap dogs, Lhasa apso has all the features of a sturdy, muscular dog ready to handle unfriendly climates and landscapes.

The average lifespan for both breeds is about 12 to 15 years old. However, many Lhasa apsos were known to live until their late teens or even 20s.

One of the main differences between the two is when they reach maturity: the bichon frise is fully developed by one year old, while Lhasa apso may remain puppyish until three years old. This means that new owners must be more patient with Lhasas that may not be so serious with their training.

The bichon frise is a merry, playful, and smart companion dog. It loves playing games, going for daily walks, exploring new areas, but also snuggling with you whenever you want. It lives for your attention and care, and it is a bit stubborn when it comes to training.

Bichons are peaceful pups, so they get along well with kids or other pets. It’s important to opt for early socialization as a pup to make sure your bichon turns into a confident, friendly dog. It is a bit independent, but not really an alpha dog – a bichon will love to learn tricks and perform for your amusement, especially when you offer treats as rewards.

While bichons are the definition of a cuddly lap dog, Lhasa apso is quite far from this description, despite its fluffy appearance. In fact, many owners get Lhasa apso expecting a fragile lap dog but, in reality, Lhasa is one of the sturdiest breeds in the world. There’s a royal touch in its behavior and temperament, and it tends to be very wary of strangers. It is a watchdog through and through, so it’s always suspicious around new experiences or people.

To help your Lhasa apso integrate easily, early socialization and training are a must. This breed is a very skilled watchdog and may even bite if they are threatened or pushed too far. To avoid such behaviors, training is important, especially as a puppy to avoid having an unfriendly adult later on.

Lhasas are very smart and stubborn, but also dominant, which makes them quite difficult to train. You cannot force them to do as you say, and harshness will only make them spiteful, just like bichons. Both breeds are intelligent and can be successfully trained when you use praise and food rewards while avoiding negative reinforcements.

Another important aspect regarding these breeds is the time required for grooming and maintenance. While bichons are great for people with allergies because they are low shedders, both breeds require a very solid grooming schedule. The long and flowing coat of a Lhasa apso must be maintained very frequently, just like a bichon’s curly coat that is highly prone to matting.

One important distinction is that some owners may choose to trim their Lhasa apso pups to make grooming easier – since you won’t have to brush it so often. While this is a possibility with a Lhasa apso, it’s not recommended to do the same with a bichon because of their very sensitive skin.

Finally, despite the small size, you need to keep in mind that both dogs require daily exercise. They may not need intensive physical exercise like larger breeds, but daily walking is a must to keep them healthy and avoid obesity.

Bichon Frise vs. Lhasa Apso: Which Should You Get as a Pet?

The decision may be all down to a simple question – would you like a guard dog or a lap dog? As their temperament is the key difference between the two breeds, you may want to decide which pup will be the better choice for your household and habits. The suspicious Lhasa apso may not be a great decision if, for instance, you have lots of friends visiting you all the time, as they are very wary of strangers.

If you suffer from allergies, the low-shedding bichon frise may be the best choice for your family. But, you need to keep in mind that frequent grooming, daily walking, and constant love and affection are a must for this pup. They may be tough to housebreak, but with proper training, bichons frises are excellent for anyone. Also, given their small stature, they are perfect for households of any size.

Finally, as briefly mentioned above, Lhasas will take about three years to reach maturity. This means that they will have a puppy-like behavior for a long time, and they may be quite short-tempered with children. Thus, if you have small kids, Lhasa puppies could be more difficult to integrate. Nonetheless, Lhasa adults are more patient, so you could opt for adopting an adult dog instead of a puppy.

All in all, there are significant differences between the bichon frise and Lhasa apso. Now you are better equipped to choose the pup that best fits in with your lifestyle. Regardless of the breed, keep in mind that any dog thrives when it is loved and cared for.

Before committing, also check out the La-Chon, a mix between the bichon frise and Lhasa apso.