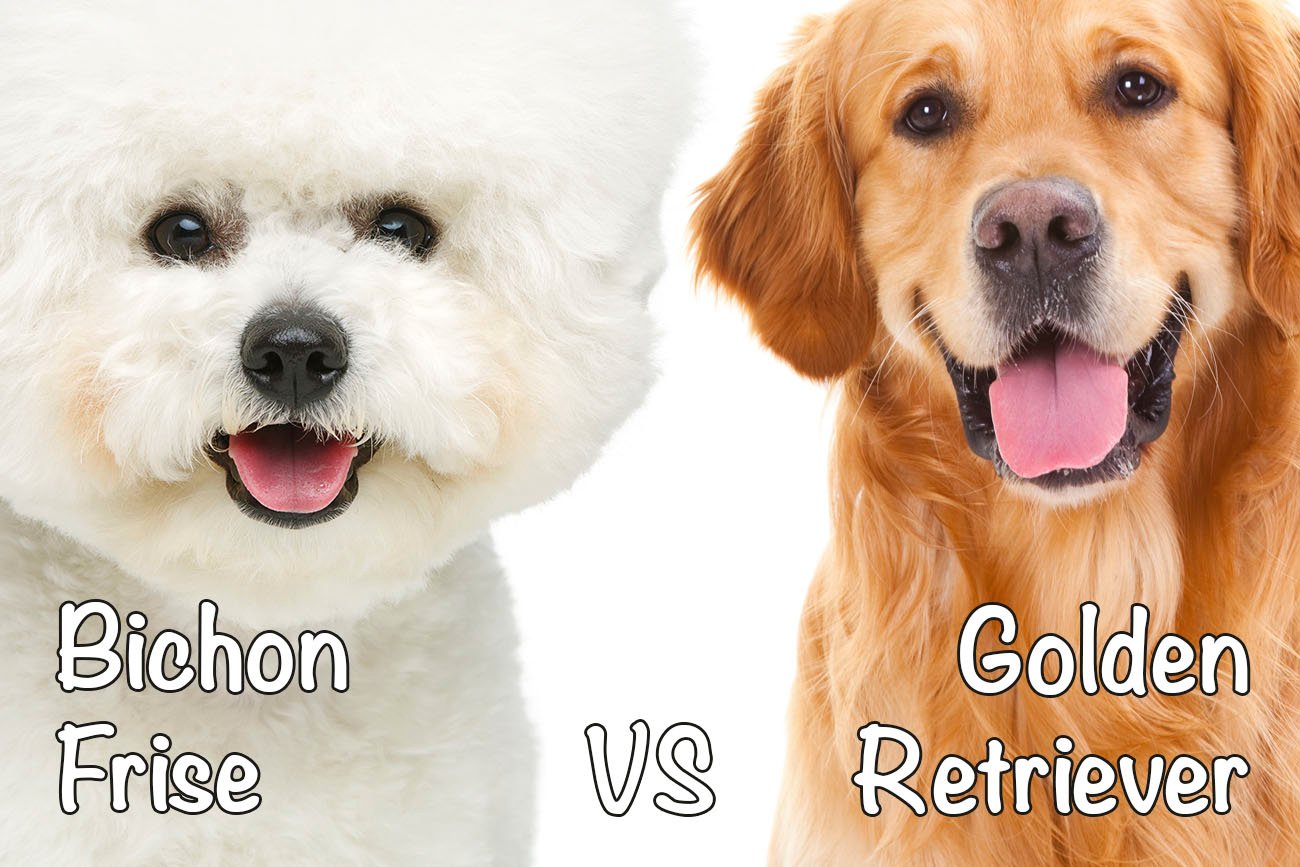 Are you trying to decide whether a bichon frise or a golden retriever is best for your household? These two breeds look very different, but they have one main common aspect: they are fantastic family members! Check out the sections below to find out what you should expect from each breed and why so many people fall in love with both of them.

Although the name bichon frise may sound French, this breed is native to Spain and used to be sailing or traveling dogs. However, when they reached France, they were turned into the curly, fluffy lap dog we know and love today.

Bichons frises are believed to be descendants of a poodle-like water dog and the Barbet, the latter turning into the name of the breed’s family – Barbichons.

Unlike the bichon frise which goes back to the 1300s, golden retrievers are much more recent, dating back to the 1800s. Their lineage started in Scotland, a mix between the now-extinct Tweed Water Spaniel and the Bloodhound.

The now family-dedicated golden retriever was not actually bred as a companion dog, but rather to find prey and retrieve it without hurting the animal, which earned it the nickname “soft mouth”.

Perhaps the most striking difference between the two breeds is in terms of appearance. The bichon frise is a small breed that reaches 10-18 pounds and up to 11-12 inches when fully grown. On the other hand, the golden retriever is a medium-sized breed that reaches double the height (22-24 inches) and weighs three times more than a bichon (between 55 and 75 lbs).

When it comes to its coat, the bichon frise boasts a fluffy, white double coat with rather long and curly hair. It is a low-shedding pup because the falling hair gets trapped in its coat – which means that it’s prone to painful tangles if not brushed daily. The bichon has deep, black eyes and a short muzzle with a black nose.

On the opposite side of the spectrum, the golden retriever is a muscular medium-sized dog. It is popular for its dense golden coat, as suggested by its name. Golden retrievers have smart eyes, a broad head, and relatively short ears. Despite its larger body, this pup is slender and graceful, and also has a double-coat (just like the bichon frise) that is water-resistant.

Smaller breeds are known to live longer than larger breeds. Consequently, you should expect your bichon pup to reach about 12-15 years old, while a golden retriever has a lifespan of about 12 years at most. Bichons frises also mature faster – typically at 6 months old, but they are considered adult dogs at 1 year old. Golden retrievers’ puppyhood lasts 2 years.

Bichons frises can be described as jolly, curious, and sensitive. It’s an affectionate lapdog that loves to socialize and does well with kids and strangers, but socialization at an early age is very important. If encouraged, bichons frises can be quite territorial as they are very diligent watchdogs.

The golden retriever, one of the most popular breeds in the United States, has a stellar temperament. It is obedient, kind, loyal, and affectionate. These desirable traits turned them into one of the favorite breeds for families. The golden retriever loves to play and be active but loves relaxing between play sessions too.

One of the most important differences between the two breeds is how they handle time spent on their own. While golden retrievers always find something to do – such as lying around – if their human family leaves them alone, bichons frises suffer from separation anxiety and turn to destructive behaviors.

Thus, if you want a pup that can handle a few hours by itself at home, a golden retriever may be the best choice.

Both breeds are very intelligent and can be trained with ease. Golden retrievers are bred as hunters and (unsurprisingly) retrievers, so they love to play with balls or Frisbees. Bichons frises, however, can learn new tricks with ease and they live to please their owners.

They are both smart and trainable, but you need to be consistent and firm, just like with most other breeds. When trained from an early age, both breeds turn into well-behaved, friendly family members.

If you prefer a low-shedding pup over a heavy shedder, then the answer is quite easy. Bichons frises are very, very low-shedders because the falling hair gets trapped in their double coat. In turn, this makes a bichon frise higher maintenance since you need to brush them daily to keep tangles and mats at bay.

If you prefer to spend less time brushing your pup, and perhaps more time cleaning the house, you should consider a golden retriever. In general, they massively shed their coat twice per year, and moderately shed all the time. As a tip, if you want to prevent hair on the floor, carpets, or furniture, it’s best to brush your golden retriever twice per week. During the heavy shedding periods, brushing should be done daily, just like you’d do with a bichon frise.

Both breeds need other grooming activities to stay healthy. Dental hygiene is important, and so is taking care of their nails, ears, and giving them at least a monthly bath (or whenever necessary).

Overall, both breeds are calm. Bichons frises usually love to cuddle and take a nap, but long periods of silence are often interrupted by short, quick bursts of energy. To keep your bichon healthy, you need to take it out once or twice per day, about 30 minutes in total. Apart from this, it’s highly recommended to spend lots of time playing with your bichon – a must for any happy bichon frise.

Golden retrievers are a sporting breed, so the exercise needs are much higher than a bichon’s – about 1 hour of more intense activity per day. A bored golden is not good – as they will most likely get stressed and turn to bad behaviors.

If you are very active and want to take your golden retriever with you while running or riding a bike, you may need to check with the vet first. Although active dogs, goldens must be checked before intense or high-impact activities in order to ensure the health of their bones and joints. If you want to keep it simple, most golden retrievers are very happy just doing what they were bred to do – retrieving toys and other items for you.

Bichon Frise vs. Golden Retriever: Which Should You Get as a Pet?

Based on their differences, you may be able to choose one of the two, but one thing is for sure: they are both loving, caring family members! Bichons may be more suitable for people who live alone and have a lot of free time, older people, or larger families when a family member is always at home.

Golden retrievers are active pups who will be the perfect companion for an active pet owner. They are ready to join you on a hike, go for a swim in a nearby lake, or play in a large garden. Golden retrievers may not be the best choice if you live in a small apartment – rather, the small-sized bichon may be more comfortable in such an environment.

Bichons frises and golden retrievers are two of the most popular and beloved breeds in the world. There are friendly, smart, and affectionate. There are many physical and personality differences between the two since one was bred as a companion dog and the other is a skilled hunter.

They will be a fine addition to a loving family that can take care of their physical and emotional needs.