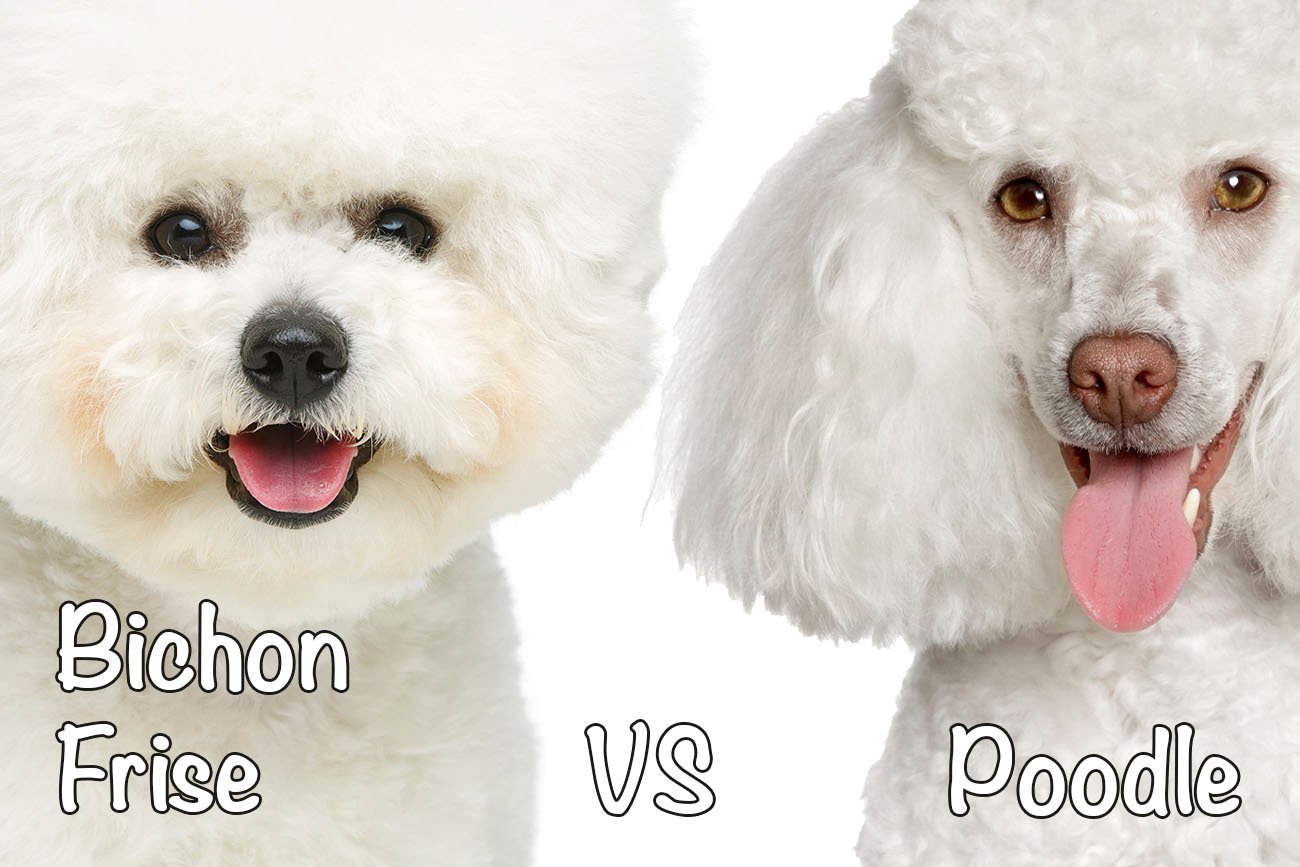 When it comes to the bichon frise vs. the poodle, you can be forgiven for having a hard time deciding which one is best for your family and household. After all, both are cute as buttons, devoted companions, and known for their striking hairstyles.

Luckily, we’ve put together a careful breed comparison to help you decide whether a bichon frise or a poodle—be it a toy, miniature, or standard—is the right dog for you.

With that, let’s jump right into the comparison.

The bichon frise and all three types of poodles have a similar history. They both descend from ancient water dogs.

The bichon frise originates from the bichon-type dogs that developed in Europe. They were descended from the barbet, or French water dog used by the aristocracy to hunt waterfowl. In fact, the word “bichon” might be derived from the word “barbichon,” which means “little barbet.”

Smaller barbets, or bichons, first became known around the 11th century and were popular companions of the aristocracy. They spread from France across Europe and eventually to the colonies, creating a variety of bichon-type breeds such as the Havanese or Bolognese.

The first records of the bichon frise are of French sailors from Tenerife who kept these little bichon-types on their ships in the 14th century. These dogs, called the bichon Tenerife, eventually found their way back to the French court and the aristocracy.

Although the French revolution and the World Wars nearly wiped them out, groups dedicated to the breed allowed it to survive and become the bichon frise we know and love today.

The standard poodle, also a water or duck hunting dog, is an ancient breed. It likely comes from a mixture of water dogs across Europe, from Spain and Germany to Russia. However, it’s highly probable that the barbet also played a role in its development. Some think that the ancient North African barbet was also an influence.

Either way, poodles appear to be an old breed, with pictures of dogs that look like poodles adorning Roman and Egyptian art from the first century B.C.

Although the poodle seems to have started its development in Germany, it took form in France. Their English name comes from the German word “pudel,” referring to splashing in water. This reflects their working breed background, where they retrieved birds from the water.

In the fifteenth century, smaller Poodles emerged for the French middle and upper classes to enjoy. The miniature poodle appeared first. This smaller version of the standard was not only a companion but also a fine truffle hunter, and so it did not stop being a working dog.

After the miniature was created, poodles were eventually bred even smaller until they could be carried around in the giant sleeves of the nobility. This earned this tiny poodle, which would later become the toy version, the nickname of “sleeve dog.”

Unlike the miniature and the standard poodle, the toy was kept solely as a pet and companion. However, traveling Gypsies soon saw the potential in poodles as entertainment. As a breed that loves learning and performing tricks, they soon became a familiar spectacle at carnivals. This would start the trend of cutting and dying their coats in fantastic styles.

Eventually, all three poodles would come to America, becoming the most popular dog from the 1950s to the 1970s.

The bichon frise is a stocky, square, and robust little dog. Your average bichon frise weighs between 10 and 20 pounds and can be between 9 and 11 inches high. While there are teacup bichons frises too, those are not an officially recognized breed and sometimes are a result of irresponsible breeding. When properly groomed, bichons frises have a highly recognizable puffed-out coat, making them look like cute balls of fluff.

This bichon frise is double-coated with a curly, coarse outer coat that gives them their iconic appearance. They can be white, white and buff, white and apricot, or white and cream. They have dark round eyes and a short nose, with a plumed tail that curves over their back.

All three recognized types of poodle also have iconic curly coats. However, unlike the bichon, they have a single dense coat. Poodles also comes in a variety of colors, greater than bichons do, in fact, including:

The AKC only recognizes single-color poodles, however multi-colored dogs are relatively common. These dogs also tend to have a finer, leaner build, with oval eyes and longer noses, while their tails also curl over their backs.

The different poodle types differ vastly in size with some being more similar to bichons frises then others.

The miniature poodle is closest to the bichon frise in terms of size, although it is a bit taller. It weighs 14 to 18 pounds and stands 11 to 15 inches tall. The standard poodle is a medium-to-large breed. It can weigh between 45 and 70 pounds, and it can stand a minimum of 15 inches high. However, it is usually around 22 inches at the shoulder.

There is another unrecognized type of poodle that is usually lumped in with the standard type, called the Klein (Moyen) poodle. Arguably, they are the medium-sized kind, as they are 15 to 20 inches high and weigh 40 to 50 pounds.

The life expectancy of the bichon frise is between 12 and 15 years. They are usually healthy dogs. If they come from reputable breeders and are raised with a good diet and plenty of exercise, they can live much longer, into their late teens.

The general rule is that the larger the dog, the shorter the expected lifespan.

Keep in mind, both the poodle and the bichon frise can be subject to hereditary diseases. Therefore, if you aren’t adopting, be sure to only buy from a breeder that screens their dogs for health problems.

The bichon frise is the ideal companion dog. Although they will benefit from early socialization and training, they love nothing more than to spend time with their owner. They are usually calm, friendly, and outgoing dogs.

They can enjoy a bit of obedience or agility training, but they only have mild-to-moderate exercise needs. A half-hour walk a day, along with some playtime, should be fine for them They are also highly attached to their owners and prone to separation anxiety, a trait shared by the toy and miniature poodles.

They can be a little stubborn, but they respond well to positive reinforcement and patience. The bichon frise is also generally a quiet dog that does well in apartments, provided they are not left alone for long periods.

The toy poodle is a bit more rambunctious. Although it is too small for the large amounts of exercise the miniature and the standard need, the toy still needs tons of mental stimulation and early training.

Because of their size, they are prone to playing the part of the diva, and if they are allowed to become bored, they will find ways to entertain themselves. This may include excessive barking, which could make them a problem with your neighbors. So even though they are a tiny companion breed, the toy poodle needs a bit more time spent on obedience work, with extra mental stimulation to keep them from falling into bad habits.

The miniature poodle also can quickly become bored and frustrated. They thrive with jobs to do and excel at sports like agility. Like the toy, they are often under-stimulated because owners assume they are only companion dogs and rarely bother to train them.

However, the miniature poodle is a high-energy, highly intelligent pup that needs to have its energy channeled to avoid becoming destructive.

The standard poodle is equally energetic and intelligent. Still, because of its size, it needs considerably more exercise than its smaller counterparts. It is also a perfectionist and a sensitive dog. So while it craves training, it knows when the trainer has made a mistake and be given to sulking if it does not get its expected reward.

While these are lovely family dogs, they are also quite high maintenance in their exercise, training, and grooming needs.

The bichon frise is a companion dog and has few working-dog tendencies left. They are quick to learn and eager to please but do not do well with too much repetition or harsh words.

Training sessions are best kept short and sweet. They are very empathetic and make excellent therapy dogs. They can also enjoy a bit of obedience work or a sport like agility for fun and bonding time with their owner.

On the other hand, the poodle is considered one of the most intelligent dogs in the world. They have fast and eager little minds, which should be channeled and shaped from an early age. All poodles should be taught basic obedience at the very least. Trainers should be quick to reward and preferably also be experienced, as the poodle is often a few steps ahead of the average owner.

While bichons frises can swim, the toy poodles will love games like fetch, and all poodles will really enjoy swimming. Miniature poodles will enjoy most dog sports, including agility.

At the same time, the standard poodle is a versatile dog that will love everything from hiking to dock diving. Poodle owners may also enjoy teaching their dogs to “talk” with voice recordable training buttons.

Below are a few more differences (and similarities) between the breeds to keep in mind when choosing the right breed for you:

Bichon Frise vs. Poodle: Which Should You Get as a Pet?

If you are still stuck between the bichon frise and one of the poodle breeds, the following can help you decide:

Get a Toy Poodle If:

Get a Miniature Poodle If:

Get a Standard Poodle If:

If you still can’t decide, make sure to also learn about Poochon, a mix of the two breeds that combines the best of both worlds.

The bichon frise and the poodle are both iconic dogs with many traits in common. They are considered hypoallergenic dogs, who are exceptionally devoted to their owners and highly intelligent. They also all need a lot of grooming!

Nevertheless, on the whole, the poodle needs far more exercise, training, and mental stimulation to avoid becoming destructive. Bored and under-exercised poodles can be prone to barking and other unwanted behaviors.

So if you are looking for a quieter, more easy-going companion dog, the bichon frise is for you. On the other hand, if you are interested in taking part in a sport such as agility or spending a lot of time training and exercising, a poodle might be the dog for you.