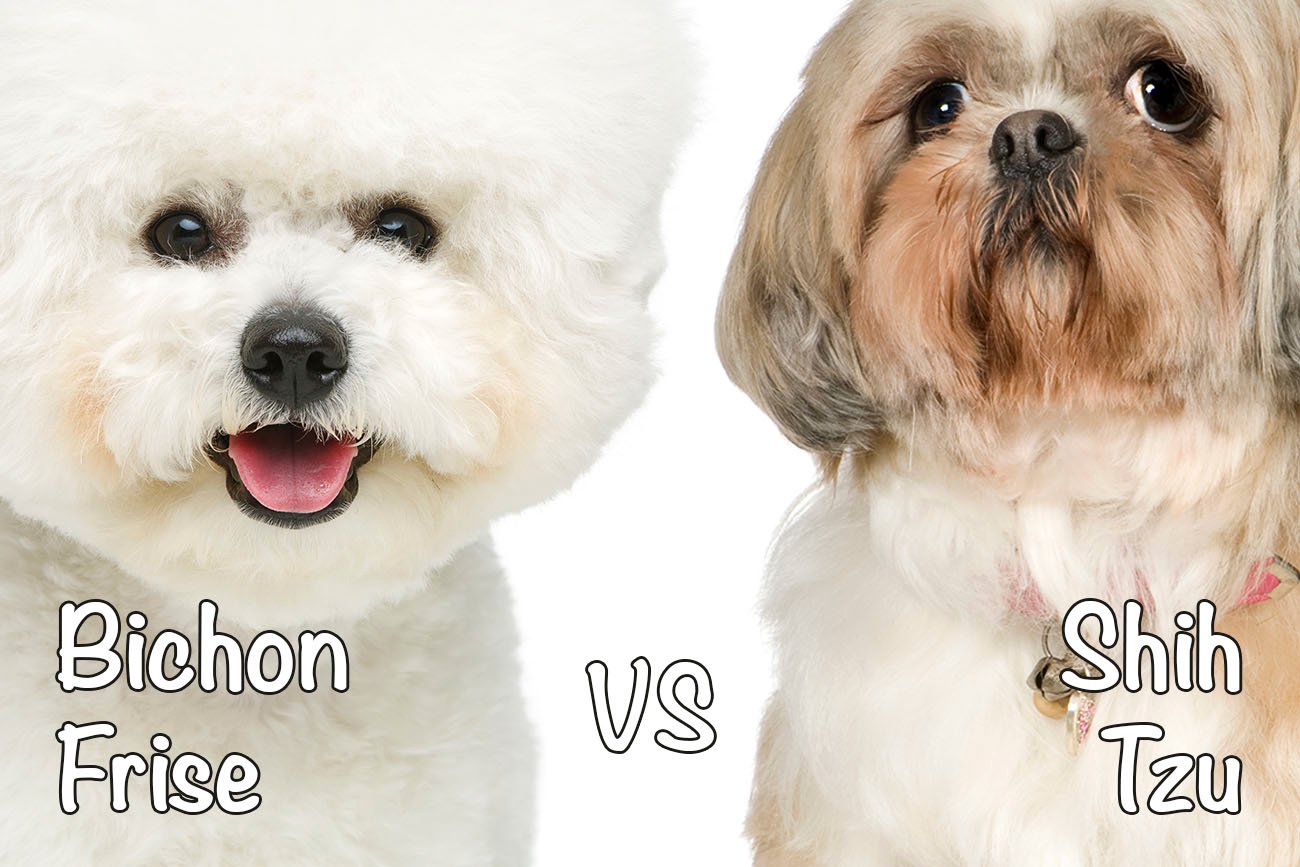 Bichons frises and shih tzu are both small dogs that can make great companions. They are ideal for inner-city living and don’t require excessive amounts of exercise.

As such, it’s no surprise that you are trying to decide between the two. Before making the final decision, though, you might be wondering how bichon frise and shih tzu compare based on a number of different factors.

That’s what we’ll do today. Continue reading to get closer to picking the better of the two for your situation.

Let’s start by comparing the two breeds on a number of points including their origins, appearance, temperament, and so on.

Bichon frise’s lineage is a bit unclear but it is thought to have originated in the Mediterranean and closely related to the Havanese, Maltese and Bolognese breeds. It’s even rumored that Cleopatra was fond of little white dogs such as the bichon frise (or at least a dog that looked like the modern bichon frise).

At some point in the 13th century, they found themselves as the pets of European royalty and became well-known during the Renaissance, many featuring in portraits with their owners. Eventually the breed made its way into the United States after World War II and spread throughout the rest of the English speaking world.

The shih tzu’s lineage started around the 6th or 7th century in Tibet. Often a popular tithing given to Chinese emperors, experts speculate about crosses with Pekingese which resulted in a shortened face. The name shih tzu means lion dog in Chinese, which to those of us linguistically inclined will also bring up links to Pekingese dogs.

Bichons frises have a short medium coat, snow white in color, and don’t shed much. The coat is generally spirally formed and contrasts with the jet black eyes and nose. They stand at about 10 inches and weigh from 12 to 17 pounds.

They are capable of being athletic and agile dogs and move smoothly, often doing quite well in competition both as show dogs and agility dogs.

Shih tzu are known for their floppy ears, underbite, and longer, silky hair. Normally classified as a toy dog, they are slighter smaller than bichons frises, ranging from 9 to 16 pounds at a similar height of 10 inches. Generally considered much easier to groom than bichons frises, they also do not shed much and come in a variety of colors including white, gray, black, brown, gold or multicolored. A common nickname is the Chrysanthemum Dog, as the hair on their face grows out like a flower petal with a cute button nose as a pistil.

Bichons frises are generally healthy dogs with some common health issues including skin allergies, ligament issues and knee dislocation. Picking a reputable breeder that can demonstrate strong bloodlines can lower this risk substantially.

Shih tzu can have ear issues but weekly cleaning will stop infections. Otherwise they tend to have various teeth related issues including baby teeth not coming out when permanent teeth come through and breathing difficulties due to swelling of the gums. Hernias are not uncommon in puppies.

Their breed has eyes that bulge slightly and this can lead to many issues including keratitis, proptosis and dry eye. You should familiarize yourself with these conditions by talking to your vet as they can be treated if caught early enough.

Bichon frises are known as dogs that thrive on interaction. They are intelligent and playful dogs and are suited to being indoors, even in smaller spaces like apartments.  They get along well with both adults and children alike.

Bichon frises generally have no issues in the company of other dogs particularly if properly exposed to dogs as a puppy. Despite their small size they don’t tend to have “small dog syndrome” and will socialize well. While alert and curious, they are not particularly suited to being a guard dog. That said, they will bark at almost anything so it is important to train them early so they can calm themselves down and stop barking.

Shih tzus are also very sociable dogs that love to be with their families. This can lead to separation anxiety if left alone but otherwise they are an affectionate and sweet-tempered companion. They are little balls of energy and with a short to medium walk daily they will stay at a healthy weight.

Shih tzus will get along with adults and children alike, but supervision is necessary with very young children as they are still very small dogs that could get unintentionally injured. They tend to be good dogs to adopt as they won’t have an unbreakable attachment with their previous owner, particularly if you show them lots of affection as their new owner.

Shih tzus are certainly not one of the most intelligent breeds out there, with author Stanley Coren’s book “The Intelligence of Dogs” showing that the Shih Tzu needs about 80 to 100 repetitions of a command before obeying 25 percent of the time. All this means is that you will need to be patient when training and consistency is key.

Bichons frises are generally considered quite smart dogs and respond well to training. Consistency is one of the most important things for raising a confident, well-trained dog. Your Bichon frise is a quick learner and eager to please which can make training easier.

However be aware that this also means they will pick up bad habits, either from you or from the other dogs they socialize with. They will look to outsmart you when they don’t feel like doing something, and this often manifests as stubbornness. Bichons frises do not respond at all well to scolding so try to keep your cool!

Bichon frises do not have very high energy levels and will get along with any human or dog breed. Daily walks and play time will be more than enough to keep your bichon frise occupied; however it is best that your schedule allows you to spend time together on a regular, daily basis.

Bichons frises can have issues with skin problems and allergies. They are slightly high maintenance in regards to grooming and you will likely need to visit a professional to make sure they are groomed properly.

Shih tzu are stubborn which can make training difficult and will often try to get out of training by being overly affectionate and trying to distract their owner.

Bichon Frise vs. Shih Tzu: Which Should You Get as a Pet?

If you’re looking for a companion dog, you can’t go wrong with either breed. Both are ideal for smaller living spaces and neither need a lot of vigorous exercise. Grooming is a bit more involved for bichons frises however it is generally a much smarter dog and doesn’t tend to have as many medical issues on average as shih tzu.

If you’re allergic to dog hair, then both breeds are less likely to cause issues for you so if you’ve always wanted a dog but couldn’t due to allergies, these two dog breeds may work for you. They are both very sociable breeds, however, the shih tzus can be hard to train as they have a reputation for being stubborn (or independent depending on your viewpoint).

Lastly, you might also want to consider Shichon, a mixed breed combining the best of both worlds.

Not much separates these dogs and so choosing one over the other is likely down to personal preference. The higher capacity for training with the bichon frise is a very tempting quality but the slightly lower weekly maintenance (especially related to grooming) means the shih tzu can be easier to take care of.