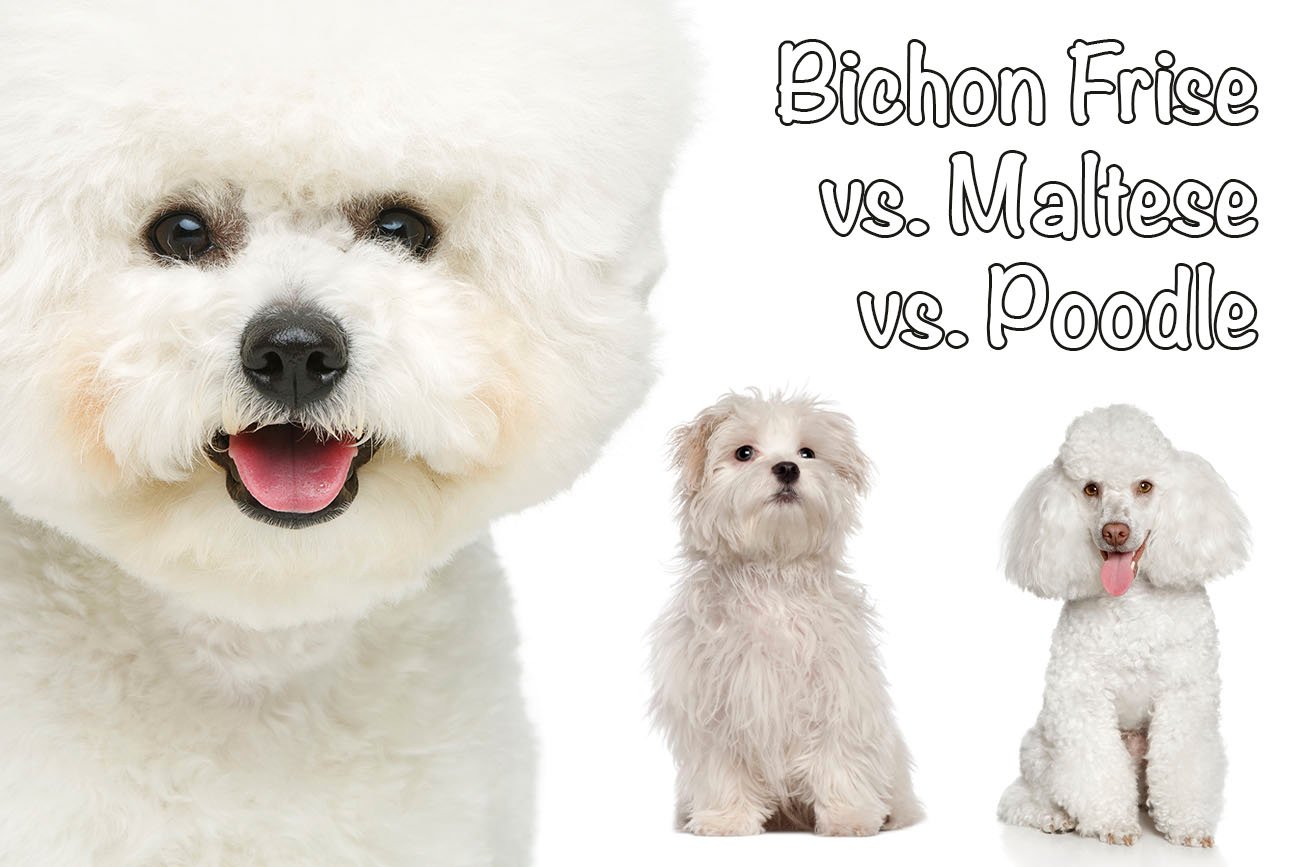 If you still don’t know what the differences are between a poodle, bichon frise, and Maltese, don’t worry. We bring you a complete guide to inform you of everything you need to know about these three adorable breeds.

Keep on reading to know which of the three – if any – is right for you!

Bichon Frise vs. Maltese vs. Poodle: A Detailed Comparison

The poodle, the bichon frise, and the Maltese are very popular dogs, which attract attention due to their aesthetics, size, and character. They have similarities that can lead to confusion between them. To avoid mistakes, here are their differences.

Let’s start with looking at the three breeds’ backgrounds.

Of French origin, the poodle is a very well-known dog breed. The breed is quite old since it originated in the 16th century and was originally used for hunting waterfowl. Then and now, they are dogs dedicated to companionship.

There are several types of poodles: the standard, the miniature, and the toy. It is with the miniature poodle that the Maltese can be confused. The others are much larger.

The Maltese is a dog from the Mediterranean region. They are also bichon-type, although their exact origins are not clear, and the idea that they came from Malta may be incorrect. They have always mostly been companion dogs. Hence, they are good-natured, sweet, calm, and perfectly adaptable to life in the cities.

Theories about the origin of the bichon frise vary widely. Still, it is generally accepted that the ancestor is the French breed known as barbet or Spaniel d’Eaux. The name “barbichon” originated from barbet, which was later shortened to “bichon.”

Next, let’s look at how the different breeds look.

Poodles come in a much wider range of colors than the Maltese or bichon frise, with curly, single coats in white, silver, sable, cream, blue, black, and more. Their size depends on the exact type of poodle.

The standard (large) poodle is likely the original type that gave rise to the other size groups. They are usually 15 inches or taller and weigh about 45 to 70 pounds. The miniature poodle has a height at the withers of 11 to 15 inches and weighs 15 to 17 pounds. They look like medium-sized standard poodles but smaller and show no signs of dwarfism. Lastly, the toy poodle is genuinely tiny, being as small as 9.5 to 11 inches high and sometimes weighing a mere 6-9 pounds.

With large dark eyes, a black nose, and gleaming white fur, the Maltese win the hearts of many dog ​​lovers just by their looks. Despite being only 7 to 9 inches tall at the shoulder and weighing only 3 to 8 pounds, they attract much attention. Their silky coat has no undercoat and reaches the ground.

The gorgeous appearance of the Maltese is achieved by elaborate care on your part.

The bichon frise is a small dog with a cheerful appearance and a confident character. They are very similar to other bichons, but this type is characterized by its white, fine, silky, and white hair, with large ringlets. They can be tan or buff.

The rim of their eyes is black, something that highlights their look. The ears fall on both sides of the head, thin and not too long. Every part of their body is balanced. The tail is set slightly below the dorsal line and is carried high, forming an elegant curve on the back.

All three breeds can live relatively long. More specifically, poodles, Maltese, and bichons frises live, on average, between 12 and 15 years. Of course, there are some dogs that live much longer than that with a prime example of that being the world’s oldest bichon frise.

While looks are important, so is temperament. Let’s look at how the three breeds compare.

Confident poodles are cheerful, good-natured, and playful when living with their owners. Poodles enjoy games such as throwing a stick or ball and are very energetic. Although they give their heart and soul to their family, they have strong personalities and love to be the center of attention.

Socialized poodles are very calm and easy-going when interacting with other pets. Due to their eagerness to learn, poodles are very easy to train. However, the larger poodles have much higher needs for daily exercise, and their active minds are better never left bored with nothing to do.

The Maltese are sweet, affectionate, intelligent, responsive, and sensitive. They are ideal lapdogs who love cuddling with their human.

When around noisy children, they can sometimes be bad-tempered. Their slight build contradicts their bold spirit. Extremely vigilant, the Maltese emits a torrent of barking in response to unfamiliar noises, unlike the usually quieter bichon frise and poodle.

The bichon frise is an attractive, intelligent, cheerful, and playful dog. They have round and lively eyes, which almost seem to read your thoughts when they look directly at you.

They are ideal as companion and lap dogs and adapt very well to any type of housing.

Poodle lovers call them the most intelligent dogs in the world. They are not far wrong. In fact, the poodle breed is known for its extraordinary learning and training ability and scores higher in intelligence than the Maltese and bichon frise.

The Maltese could also be a circus dog since they learn very quickly—you just have to spend some time and be patient. This dog has impressive intelligence and a fantastic memory.

The bichon frise is a straightforward dog to train thanks to its high intelligence level. However, it is advised you educate them and get them used to the presence of other people when they are puppies. They can be easily distracted and independent, so they need consistency, patience, and positive reinforcement.

Here are a few other factors to keep in mind when getting any of the three breeds:

Bichon Frise vs. Maltese vs. Poodle: Which Should You Get as a Pet?

After looking at how the bichon frise, Maltese, and poodle compare, the next question is: which pet should you get?

Get a bichon frise if:

Get a poodle if:

Overall, the bichon frise, Maltese, and the poodle are all optimistic animals and perfect companions for small families with older children or settled, adult households (especially those with allergies). More active households will do well with a larger poodle, while quiet homes with one or two adults may enjoy the companionship of the toy poodle, bichon frise, or Maltese.

If you still can’t decide, you might also want to consider getting a maltichon (bichon frise x Maltese mixed breed).