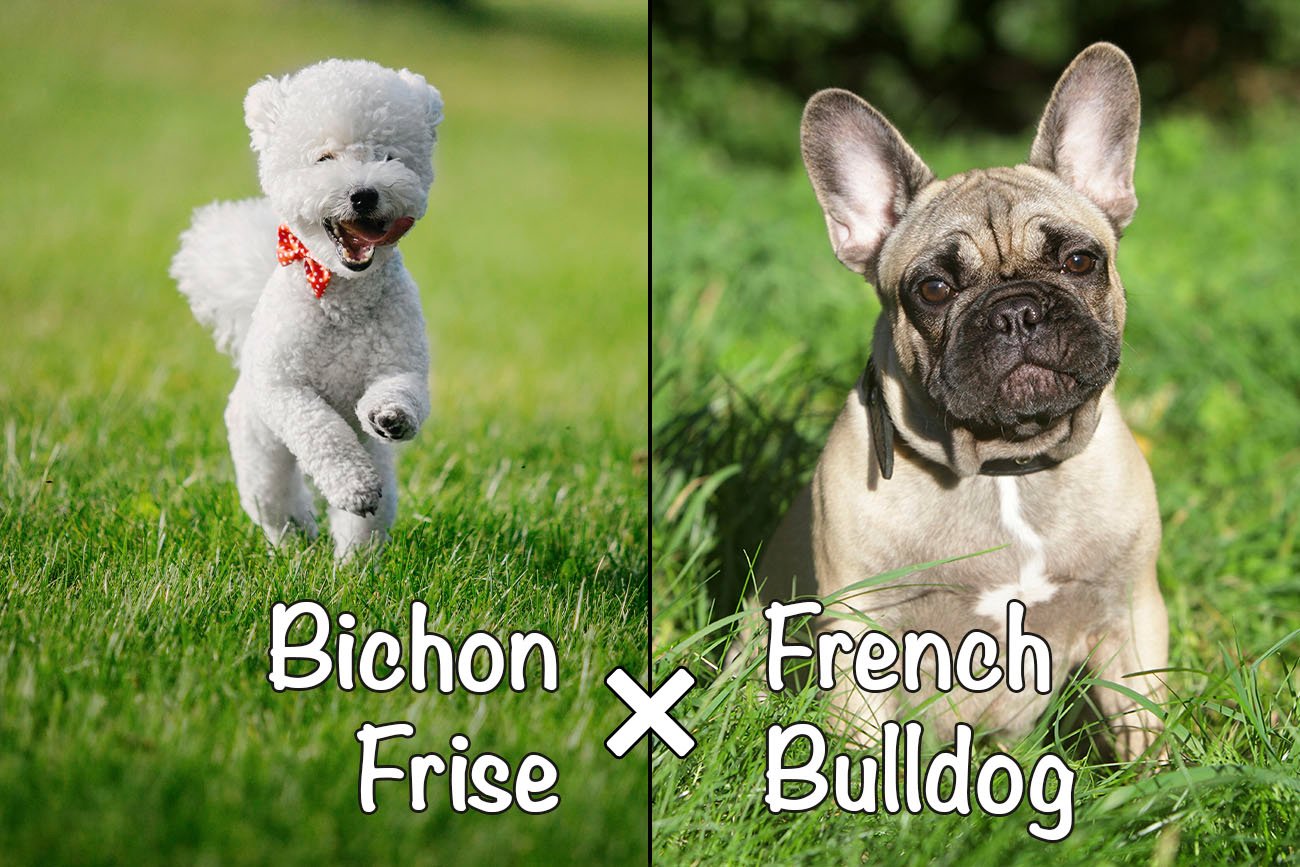 The Frenchie Bichon is an interesting mix between a bichon frise and a French bulldog. The lovable hybrid is friendly and polite, well-balanced, and extremely intelligent. If you love bichon frise mixed breeds, adopting a Frenchie bichon may be one of the best choices!

Keep reading to find everything you should know about this hybrid before welcoming it into your family.

The Frenchie Bichon is a relatively new hybrid, so there is not much information on its history. Most of the hybrids we have today gained popularity at the end of the 1990s. However, both of its parents have a much longer and more interesting history.

The French bulldog’s name is quite misleading. It is not French at all – instead, it originated in England and it was meant to be a smaller version of the standard bulldog. It was popular in Nottingham and, when the workers there emigrated to France seeking a better life, they brought the pup with them.

In France, over the years, the dog was a favorite for virtually every single working class, finding a home in dwellings ranging from brothels to royal courts. While bulldogs are associated with a violent past and animal combat, nowadays, this pooch has no aggressive traits and is an excellent family dog.

The bichon frise belongs to the Barbichon family, along with the Bolognese, Havanese, and Maltese. Their history is believed to have started in the Canary Islands, although the exact origin is shrouded in mystery.

Bichons frises have a long history with nobility, being respectable members of royal families in Spain, Italy, and France. However, in the 1800s, they fell out of favor. Due to their goofy temperament and intelligence, they had been show dogs for a very long time but returned to more noble roles in the mid-1900s.

Frenchie Bichons are small hybrids likely to inherit traits from both of their parents. Although predicting the exact appearance of a Frenchie bichon is impossible, they are likely to retain the small size of their parents (about 13-18 pounds and a height of 10-16 inches).

The hybrid may not have the puffy coat of its bichon parent, but rather have a slightly wavy, shorter one that requires less maintenance than a bichon’s.

The Frenchie bichon may vary in color. While its bichon frise parent is white, the French bulldog genes may dictate any color ranging from brindle and white to cream and fawn, and any other combinations of these.

It’s very likely that the hybrid retains the bat-like ears and the sturdy French bulldog little body. The tail is medium-sized, while the eyes may be round and dark.

A Frenchie Bichon is expected to be a minimal shedder with much lower grooming needs than its bichon frise parent. Depending on the actual size of the coat, it may need an occasional trim. As hybrids, they are not hypoallergenic, but they surely shed less than other breeds because of the bichon frise heritage.

Depending on whether the hybrid inherits the bichon’s long, curly coat or the bulldog’s short coat, it may need more or less maintenance. If the coat is shorter, brushing once per week should be more than enough. For a long or wavy coat, you may need to brush your pup 2-3 times per week.

There are some other maintenance tasks you need to plan for. Just like any other dog, regular teeth brushing is important to maintain oral health, along with ear checking and cleaning as necessary, and even nail clipping.

The pup should be bathed when needed. You need to pay extra attention if the hybrid inherits the bulldog rolls, as they may retain dirt and debris. In time, these lead to yeast infections and other skin issues if not cared for accordingly.

In terms of activity, the Frenchie Bichon is quite well-balanced and not so active. Most likely, it will be as happy playing with you as it will be to take a nap. You should consider about 30 minutes of exercise per day, such as short walks or a short trip to the dog park.

It’s important to keep in mind that the hybrid is not properly equipped to handle extreme weather. It is an indoor pup, so they should not exercise outdoors in very hot or very cold weather.

Frenchie Bichons are affectionate, joyful, and playful. They may tend to be protective of their toys and territory, but they are not aggressive dogs. They love to stick to their owner’s side at all times, seek attention, and play enthusiastically whenever there is a chance.

The French bulldog may not be very friendly with other dogs, but the bichon frise genetics tame this feature. Thus, a Frenchie Bichon’s temperament may be mild enough to join a family with kids and other pets, too.

To ensure you have a well-behaved, well-rounded dog, it’s important to start training as soon as possible. This hybrid is very trainable because both parents are intelligent, although there is a slight chance of stubbornness. Overall, the trainability of this dog makes it suitable for first-time owners, too.

Regarding behaviors with other people and pets, the hybrid is highly likely to become best friends with just about anyone. If you have a multi-pet household, this hybrid may be a great addition to your pack. The adaptable pup will do best if you start socialization at an early age, so it gets used to different environments, noises, and situations.

The Frenchie bichon is a healthy dog. It is more robust and less sensitive than its purebred parents. All mixed breeds typically enjoy better health than pure breeds. Nonetheless, you should still be aware of its parents’ health conditions to understand what the pup may be predisposed to.

Some minor conditions you should know of include eye infections and skin problems, especially when not cared for properly.  Bichons frises are predisposed to eye infections due to the hair around their eyes; if your hybrid inherits this feature, you’ll need to pay extra attention when cleaning its face. Similarly, if it has bulldog rolls, appropriate cleaning and disinfection are required to keep issues at bay.

Both parents are prone to allergies, both food-related and environmental ones. Common symptoms that indicate allergies include excessive itching or licking, watery eyes, and sneezing.

The French bulldog parent often suffers from spinal problems, such as Intervertebral Disc Disease, especially when they are over 2 or 3 years old.

Hip dysplasia is also a common problem for both parents, which means that the hip joint does not develop properly, leading to deterioration. This painful condition is worsened by obesity; some symptoms include hip sensitivity, bunny hopping, inability to jump or climb stairs, and even difficulty standing up.

The best way to ensure your pup is healthy is to schedule regular vet visits. Your vet will help you diagnose and treat issues as early as possible, extending your pet’s life. Also, diet and exercise are very important to ensure overall well-being.

Thanks to its size, the Frenchie Bichon may have about 1 cup of food per day. It may depend on the actual size, activity levels, and age of your pup, and your vet can provide you with personalized guidelines based on your pup’s unique factors. In general, high-quality food will be the easiest way to keep your Frenchie bichon happy and healthy for a long time. Puppies should eat food with a minimum protein content of 22% and 18% for adults.

The Frenchie parent loves food, so your hybrid is likely to enjoy food a little too much. Treats may be best used only during training to avoid weight gain. Flat-faced dogs like bulldogs suffer more than other breeds when overweight.

Regarding the lifespan, the Frenchie Bichon is expected to live a long life, especially with appropriate nutrition, activity, and vet checks. It may live for 12 to 14 years, or even longer.

The Frenchie Bichon can be a surprising pup with some unknown traits and historical facts. Here are the top fun facts that may surprise you and make you appreciate this hybrid pooch even more!

1. The Frenchie Bichon Is a Great Performer

Frenchie Bichon is a charming, goofy, and cheeky combo between its Frenchie parent and bichon frise’s circus personality. With a treat around, your Frenchie bichon will entertain the whole family with many tricks. It’s a smart pup, so even first-time pet owners will have a lot of success teaching it some tricks.

This is one of the great perks of hybrids – the surprise and unpredictability of having a puppy that may look like one of its parents or a unique combination of both. Even within the same litter, each puppy will look differently.

3.The Frenchie Bichon Is Not French

4. French Bulldog and the Titanic

The Frenchie bichon’s bulldog parent became such a popular breed in the U.S. that one French bulldog was recorded as going down with the Titanic. The owner purchased the dog in England and insured it for 150 GBP, approximately $17,000 in today’s dollars. Unfortunately, only the owner survived the sinking, and Gamin de Pycombe became one of the many dogs that died on the Titanic.

Is Frenchie Bichon the Right Breed for You?

The Frenchie bichon is a great companion for most, if not all, households. It is adaptable, charming, and loving. It is a great breed if you are not very active thanks to its low exercise needs and small body. Despite this, daily walks of about 30 minutes are necessary to keep it happy and healthy.

This hybrid pup is great with kids, too. It is tolerant and loves playing with the little ones, but they should always be supervised. It may also be happy in a multi-pet family, as well, but early socialization is key.

The Frenchie bichon is a well-rounded hybrid, it has much lower maintenance needs than its bichon parent, and is healthier than pure breeds. Depending on what the puppy looks like, the grooming requirements vary. With lots of love and care, the Frenchie bichon is an excellent family dog or a trustworthy companion for single households.

In conclusion, the Frenchie bichon is an adaptable, friendly, and charming companion ideal for most families. Just like other dogs, it still needs proper care, exercise, and an appropriate diet. However, whatever your style, this happy pup can integrate easily and become a valuable member of your family.