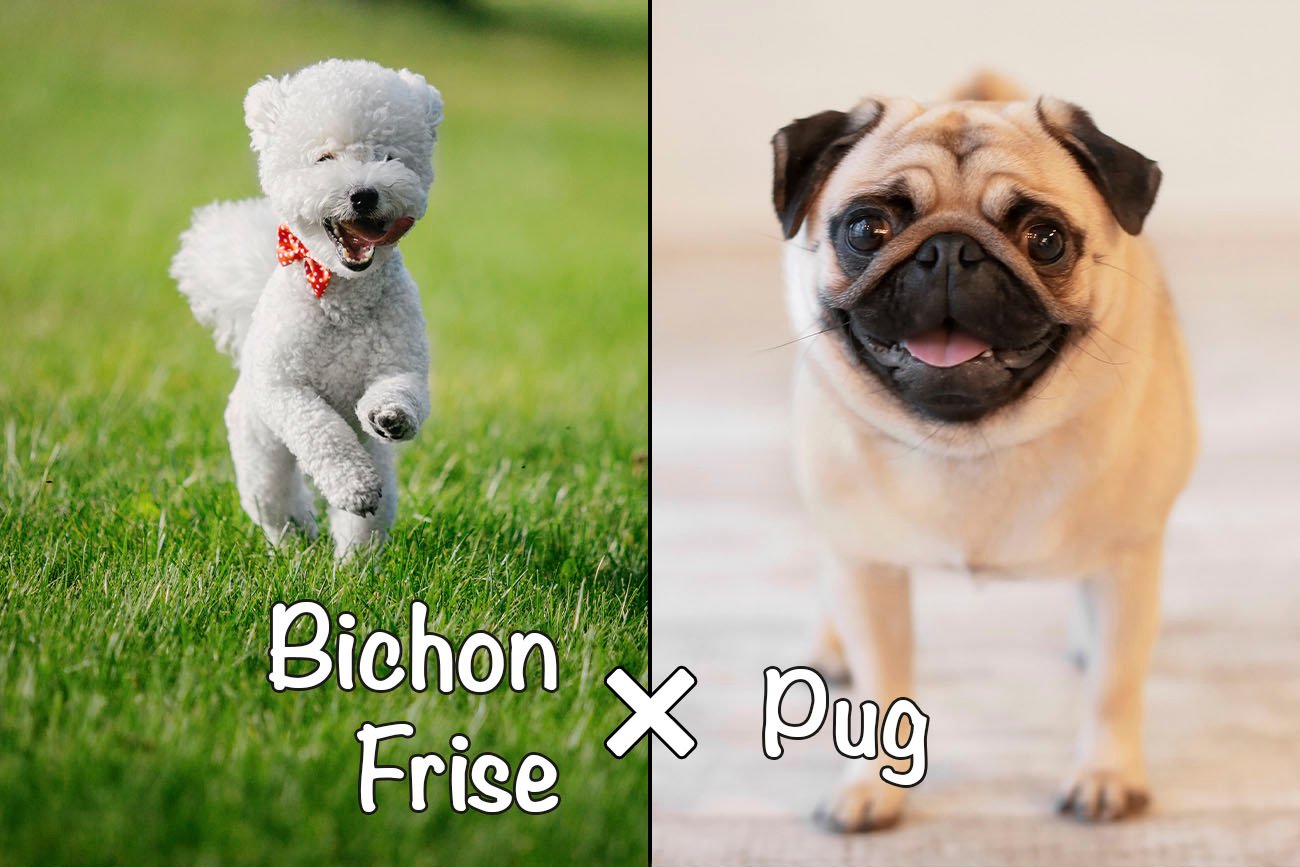 Small dog breeds are great options for a whole range of households and lifestyles. They are often suited to modern living in a way that many larger breeds are not, and can live much longer than the larger breed, meaning that you get a companion for longer.

The Pushon is a great small bichon frise mixed breed with plenty of positives – but you should know as much as possible about a breed before adopting or buying a dog.

The Pushon is a designer dog whose origins can be traced back to around 1990 in North America. It is the combination of a Bichon Frise and a Pug and was likely bred to eliminate some of the health conditions associated with the two parent breeds. The breed itself does not have much of colorful history, but both of its parent breeds do.

The Bichon Frise, for example, has been traced back to the 13th century. It is thought to be closely related to the Poodle and the Barbet Water Spaniel, and is directly related to the Tenerife dogs which were transported around the Mediterranean by Spanish travelers. It is uncertain how the breed then found its way to Europe, but once it did, there were plenty who fell in love with it!

The bichon-type breed had a surge of popularity in the 16th century when the French royals decided to keep the Bichon Frise as pets. From France, the breed spread across the globe. It was eventually recognized as an official breed by the American Kennel Club in 1972.

The Pug, on the other hand, has a more extensive history still. The small flat-faced dog has recently gained lots of popularity, but it is by no mean a modern dog. The breed can be traced all the way back to 400 BC in Asia. There, the dog was bred as a companion pet for the super-wealthy.

The breed was well known and beloved around Asia. It was a common pet of Tibetan monks and was beloved by royals and aristocrats alike. After being transported from Asia to the West by a range of different invaders and travelers, the breed had a large surge of popularity in the 19th century in the West. The American Kennel Club recognized the breed in 1885

Most recently, the breed has been bred for flatter and flatter faces and is now the cause of concern for many scientists and vets across the world. In fact, to counter that trend, some breeders have started to breed the Pug’s characteristic flat face out in order to remove the breathing struggles that the breed is often burdened with.

The Pushon is a small dog, measuring 10 to 11 inches tall and weighing between 10 to 13 pounds. Like most small breeds, the Pushon tends to reach full size within a year, and may then get stockier as time progresses.

The breed can have brown or amber eyes and can come in white, cream, Isabella, black, brown, or sable. Their coat can be short or medium depending on the lineage, and typically the coat will be completely straight.

The breed is recognizable for its usually sturdy appearance and wideset ears with small rounded paws. They are often longer than tall and have wide eyes. They are likely to also have elements of the Pug’s flat muzzle, too.

Maintenance is incredibly important to consider when it comes to choosing a dog breed. How much exercise and stimulation they require, the amount of grooming they need, and even whether they need yard time or if they suit being indoors can vastly change whether or not a breed is suitable for your home and lifestyle.

The Pushon is a relatively medium-level maintenance breed in most aspects. The breed will require daily brushing, especially if your Pushon has inherited the longer hair of the Bichon Frise, and they will need bathing every couple of weeks. Owners should be sure to regularly wash the eyes and ears of a Pushon and to ensure that the wrinkles around the muzzle are fully dry after washing to prevent infection.

In terms of exercise, the breed is pretty active. They will require around 60 minutes of exercise each day in the form of active playtime or walks. Without this, owners may find them hard to manage and they may even act out.

The breed’s energy levels mean that they do benefit from having a yard, but so long as they are provided with enough activity and long enough walks, they will not suffer without one. The most important thing for the Pushon is that they get enough exercise but also have somewhere to cool off, as the Pug genetics will often mean that they do not fare well in high temperatures.

The Pushon’s temperament is really where owners benefit from the mix of the Bichon Frise and the Pug. The Pushon is known to be an entertainer and a companion. They are just as happy sitting on your lap relaxing as they would be running around a garden with the children. They will often strive to be the center of attention and will do almost anything to remain there.

The breed is curious and lively, but also incredibly loving and social. They get on well with children of all ages, and can even form strong attachments to other animals in their home, whether that is a dog, cat, or even a rabbit.

In terms of training, the Pushon can prove to be a bit of a challenge. However, this is not because the breed lacks intelligence. In fact, the breed is of relatively high intelligence, they are just incredibly stubborn. This can make toilet training hard and can make other tasks such as recall a daunting job.

So long as you are patient, though, and use plenty of positive reinforcement and attention, the Pushon is capable of learning plenty of tricks. After all, the Bichon Frise was once used in circuses around the world!

Since the breed is intelligent, owners should be sure to provide the Pushon with ample enrichment and stimulation. This might take the form of puzzle toys, hide-and-seek games, socialization, frozen toys, or even just lots of playtime. Failing to provide such stimulation may result in a bored dog. Boredom can lead to depression in canines, especially in breeds as sensitive as the Pushon, so this should be avoided at all costs!

It is also important with a Pushon that training and socialization start at a young age. This will help to avoid the stubborn attitude, and will also help to prevent the dog from forming “small dog syndrome” and becoming a yappy, vocal puppy.

Often, pure-bred dogs have a large list of health conditions that they are particularly susceptible to. This is often why mixed breed dogs are created; to avoid the illnesses of the parent breeds. The Pushon is a prime example of that.

However, that does not mean that the Pushon is without any health concerns. There are still some conditions to which the breed is prone. Usually, though, these can be treated or avoided with the help of a vet and proper care. The conditions that a Pushon is likely to encounter or develop include patellar luxation, cataracts, canine hip dysplasia, Legg-Calves-Perthes disease, corneal ulcer, flea allergy, dry eye, ear infections, and skin allergies or irritation.

Despite this, the breed has quite a long life expectancy. On average, a Pushon can be expected to live for between 12 to 14 years with adequate care and exercise, providing you with a long-term friend and companion.

Pushons should be fed a nutrient-rich diet to properly satisfy their needs. As high-energy little dogs, this is very important to make sure that they don’t wear themselves out or burn off more than they’re eating on a regular basis. Kibbles or wet foods higher in protein are particularly ideal for this breed.

When feeding your Pushon, be sure to always fill the bowl up, even if that means getting a smaller bowl. Many Pushons have flat faces, like the Pug, and this can lead to them struggling to eat from emptier bowls. They push their face into the bowl and this can often cause choking or blocked airways.

With the basics out of the way, here’s some additional things you might want to know.

Most of the Pushons on the market are first-generation mixes. This means that they are the direct descendants of both one Pug and one Bichon Frise, as opposed to having Pushon parents. This often means that it is hard to tell which traits from each parent the puppy will have until it is born and begins to grow.

Pugs are a short coat breed, but the Bichon Frise has a curly, fluffy coat that is absolutely gorgeous. More Pushons inherit this type of coat than the Pug’s smaller coat, meaning that if you’re in the market for a Pushon, you’ll likely end up with a fluffy one!

Is Pushon the Right Breed for You?

Pushons are great dogs. They are truly dynamic, wonderful, and social puppies that grow into smart, feisty adults. So long as you know how to train them, they can make incredible pets for most households. But is a Pushon right for you?

For those looking for a dog that is happy to stay at home alone whilst they’re at work all day, a Pushon is not the right breed. The breed inherits a certain sensitivity from the Bichon Frise. Being alone all day, five days a week could very easily cause the Pushon to develop separation anxiety. This can manifest as poor behavior, acting out, being more vocal, or even forgetting toilet training.

Separation anxiety is not fair for you, nor is it fair for the dog. So for those who are likely to be away from home a lot, consider a different breed. Otherwise, you might find yourself constantly fighting with a dog who just wants attention.

Alternatively, however, the breed is incredibly well suited to small spaces. So for families, couples, or singles living in small, more urban housing, you’re in luck with the Pushon. Just be sure to give them enough exercise and to play with them on a regular basis, and they should be completely happy living in an apartment.

The breed is highly adaptable, too, when it comes to living space. The breed would be happy in a country farmhouse or a studio, so even if your situation changes – the Pushon will not be a concern.  If you are planning to move a Pushon into an apartment though, be sure to train them out of their vocal tendencies first, otherwise, you will not be making a good impression to your neighbors!