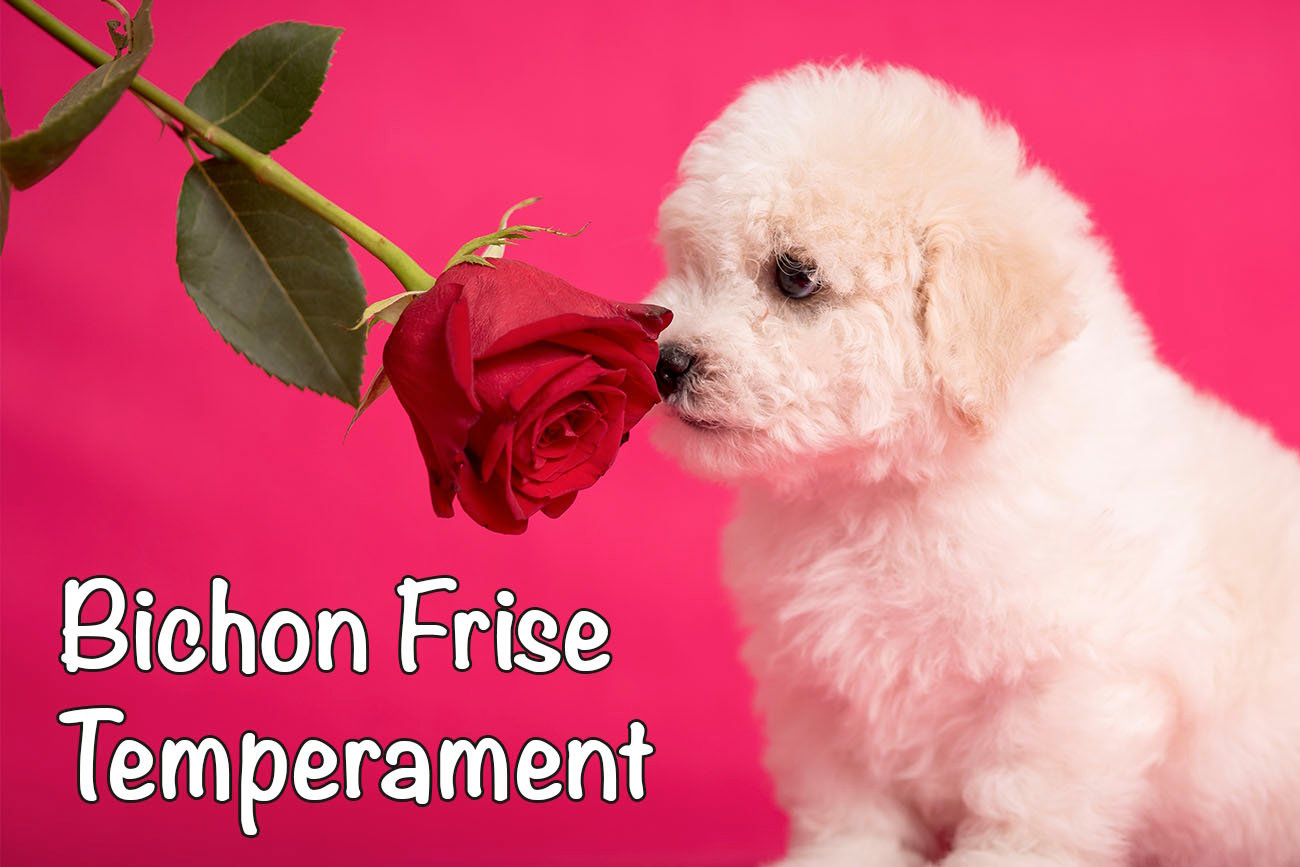 Bichons frises have been a very popular dog breed for many years, ranking 40th in the USA in 2013 and being in the top 20 in the UK. They have always been well-beloved, originally being the pet of choice for many European royals. But what is it about them that makes them so lovable? Why do we love bichons frises as much as we do?

Well, to start with, they’re incredibly cute. Their coat is fluffy and white, making them look like a mix between a cloud and a teddy bear. Their size makes them suitable for most households, and they don’t shed like other dogs, making them more suitable for those with allergies.

But in addition to all of that, their temperament tends to win people over.

What Affects a Bichon Frise’s Temperament?

Bichons frises usually have a very lovable temperament, but this can differ from dog to dog. There are a few factors that can impact the temperament and personality of your bichon frise, some of which you can control, and others you cannot.

For example, a dog’s lineage has a large part to play in their temperament, and this is not something that you can control. Of course, you can attempt to train your bichon frise to be more sociable if they’re particularly timid, but you cannot change where they come from.

If your pet seems to be particularly timid, or even if you’d just like to avoid the risk of shyness and aggressiveness, it is important to socialize your bichon frise when they’re still a puppy. This can also aid in reducing small dog syndrome.

Aside from their genetics, bichon frise’s temperament can be impacted by their environment and your behavior. Bichons frises are well known for forming separation anxiety, and this can be caused by long periods of time alone. If you’re likely to be leaving your pet at home for the day whilst you go off to work, be aware that this could cause this anxiety to occur.

Anxiety tends to manifest differently in dogs than in humans, and may result in your pet seeming aggressive, snappy, vocal, and may even lead to them misbehaving (defecating and urinating inside, destructive tendencies, biting).

Bichons frises that have experienced trauma might also present differently from other bichons. This is the case with most dogs who have gone through something traumatic. You might find that a rescue bichon frise is more timid, quiet, reactive, and perhaps unable to cope with certain situations.

Do Male and Female Bichons Frises Have Different Temperaments?

In many breeds, the males and females look identical but can act very differently. Bichons frises are often an example of this.

On the same note, female bichons frises are more aloof and often come across as a bit more reserved. That humour and liveliness are still there but manifest in different ways. Female bichons frises will often display ‘mood swings,’ wherein they will go from aloof and uninterested to begging for fuss and attention in seemingly no time at all.

Do not mistake a female bichon frise’s aloofness as a sign that she will be alright left alone – both sexes are unable to handle loneliness.

For more information on how male and femal bichons frises compare, read this article.

Does the Bichon Frise Have a Playful Temperament?

Dogs with playful temperaments tend to have bounds of energy and a cheeky personality. They are often eager to please and come across as very happy. Many people describe them as perpetual puppies, as they’re excitable and perfect companions for children and active families or owners.

They are very playful and are well-known for being a comedic, excitable breed. In fact, bichons are so excitable that they have their own term for when the excitement becomes too much: the Bichon Blitz! This is the common name for when bichons begin to run around, doing laps of your lounge, garden, or wherever else they might be.

Does the Bichon Frise Have a Cheerful Temperament?

Cheerful dogs are those who are especially eager to please. They often have a sense of calmness about them and will usually be wagging their tails. Cheerful dogs are often chosen over other breeds due to their relative lack of aggression and ability to adapt to most households.

Bichons frises are one of the most cheerful breeds out there if cared for the right way.

If given enough exercise, mental stimulation and enough company, bichons frises can easily be a cheerful companion. However, if left alone, their anxiety can develop and this can change their usually cheerful demeanor into one that is much more aggressive.

Does the Bichon Frise Have an Affectionate Temperament?

An affectionate dog, much like an affectionate person, will be much more inclined to approach for a cuddle. They will be happy to receive physical affection ad will show much more attention to their loved ones. Affectionate dogs are often much happier to socialise than other breeds.

Bichons frises are often used as hospital and therapy dogs due to their affectionate temperament and are often considered to be one of the most affectionate breeds out there.

Does the Bichon Frise Have a Gentle Temperament?

Gentle dogs are those which do not have a distressed reaction to stimulus. They are not aggressive, they’re sociable, and are unlikely to bark very much or bite anyone. These dogs are best suited for family households and terraced homes or apartments where barking may cause issues with neighbors.

Much like with cheerfulness and playfulness, a bichon frise’s gentleness is often determined by the way in which it has been raised and the life it leads. If left alone often, a bichon frise is unlikely to be as gentle as a bichon who has companionship most of the time.

Most bichons frises will bark a fair amount, particularly at any perceived threats. However, aside from that, they are relatively gentle breeds. In fact, when trained well and provided with companionship and love, bichons frises are up there as one of the most gentle breeds.

Does the Bichon Frise Have a Sensitive Temperament?

Highly sensitive dog breeds are much more likely to develop anxiety and depression, and are more likely to bark regularly or detect threats from seemingly non-threatening sources (the mailman, a bird in the garden, other dogs). These dogs can sometimes find issues socialising, and do not take well to reprimanding – especially if it involves yelling.

Whilst dogs with a sensitive temperament can be trained to not bark at things they deem to be threatening, this can often be hard work, and so many people with busy home lives, children and other pets tend to opt for less sensitive breeds.

Bichons frises are relatively sensitive dogs. They are protectors of the home, and despite being as small as they are, they’ll bark up a storm if they see anything as a threat to them, their territory or their loved ones. They are very bad with yelling or loud noises and reprimanding them with shouting, clapping or anything similar can often cause them to act out further, as it can induce anxiety.

Does the Bichon Frise Have a Feisty Temperament?

Most dog breeds can be feisty, however, some are more inclined to be than others. Feisty dog breeds tend to be a bit more vocal, and often dislike sharing attention. They can be antisocial and can often have destructive bouts when upset or bothered by something. These types of dogs can be trained out of such behaviors, but will need a bit more of a watchful eye.

Bichons frises are a little bit feisty – they can be very destructive if left alone too long, and will not be afraid to act out if something is wrong. Often vocal, bichons are a key example of small dog syndrome, but when trained correctly their feistiness can be contained and overlooked.

Bichons frises are family favorite dogs and have been for quite some time. They’re incredibly loyal, fun and full of energy, but they have to be looked after and given relatively constant attention in order to prevent them from suffering from anxiety and becoming restless and destructive.

For someone with time and patience, a bichon frise would make a perfect family pet.