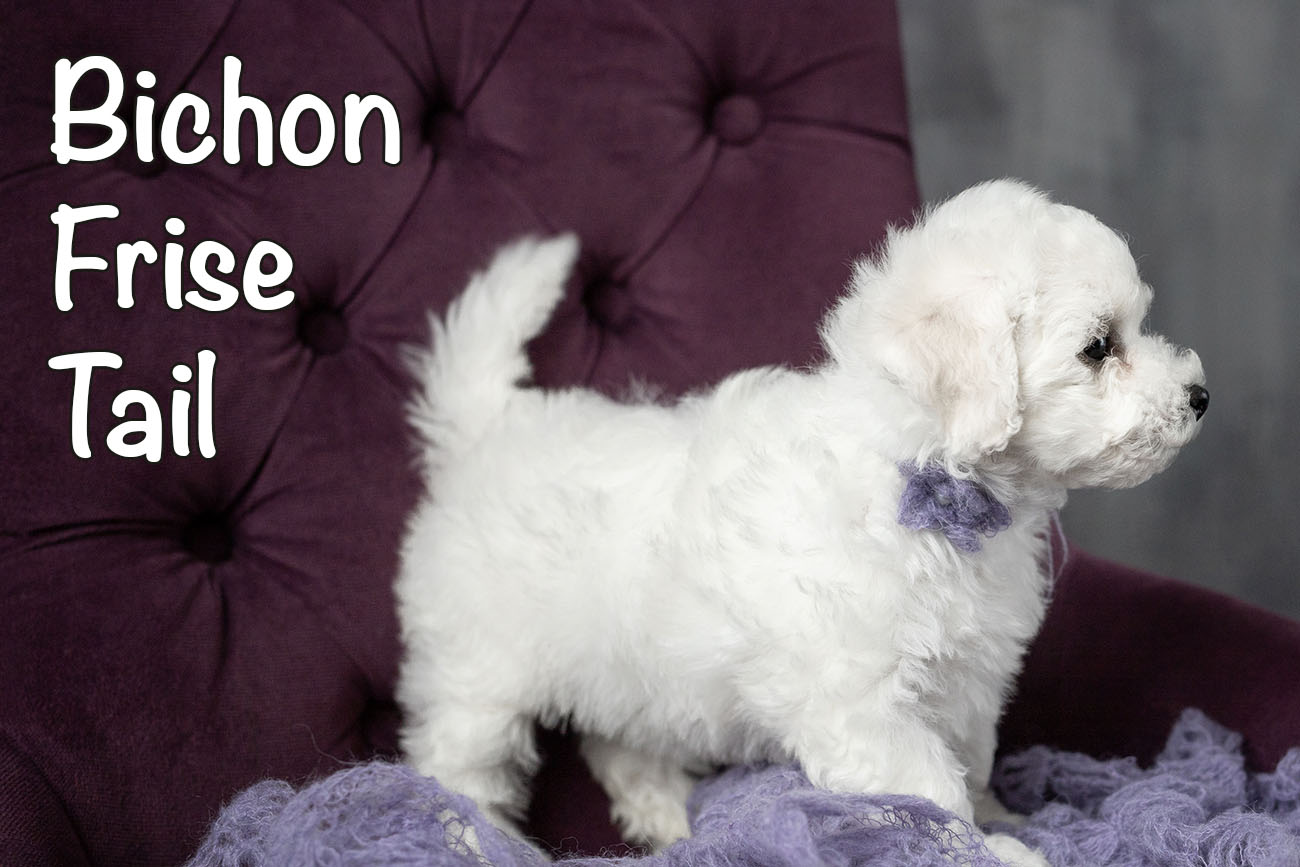 Bichons frises are one of the most popular companion dogs in the world and for good reason! Lovable, affectionate, and loyal, they make excellent emotional support and therapy dogs. Just as humans communicate verbally, dogs communicate through body language, and at the core of it all is their tail.

The tail can be used to communicate emotions such as happiness, fear, or excitement. For example, when a bichon frise wags its tail, it is sending a message that it is friendly and approachable. Ever wondered what each tail position means? Read on!

How Long Should A Bichon Frise’s Tail Be?

Bichon frise tails are typically 5 to 7 inches long, approximately the length and shape of a small banana. Your bichon should have a long, graceful tail that curves up and over its back, with the tip just to the side of its butt.

If your bichon frise or bichon frise mix does have a short, stubby tail, it has most likely been docked. We’ll talk more about that later.

Otherwise, their tails should form an arc from the base to the top of their back. Any tail curling tighter than that may be recognized as a genetic or breeding mistake.

Why Is Your Bichon Frise’s Tail Up?

Dogs communicate extensively through body language, and their tails are one of the primary ways they articulate themselves and what they’re feeling or thinking.

The tail of a bichon frise is usually carried up and nicely folded, but not scrunched or touching its back. When your bichon frise’s tail goes up, it usually means they are alert, excited, and stimulated, and could indicate that they are about to react. It means they feel:

If you notice this stance, you might want to remove your bichon from the situation so that things calm down, or allow him to show his excitement and expel some energy.

Why Is Your Bichon Frise’s Tail Down?

As mentioned, a dog’s tail is one of the main ways they communicate with us. When a dog’s tail is down, it usually means they are feeling submissive, scared, or nervous. However, it can also mean they are tired or in pain – it could even be a sign of a health issue.

If you notice your bichon frise’s tail is down more often than usual, it might be time to take them to the vet to make sure everything is okay.

Dogs are such social creatures that even a small change in their body language can be a sign something is wrong. Common reasons why your pooch’s tail is a tad droopy can be if he’s feeling:

Why Is Your Bichon Frise’s Tail Wagging?

Contrary to a very common misconception, a wagging tail doesn’t necessarily mean a friendly dog. Dogs wag their tails for a variety of reasons. In addition to the common reaction to happiness and joy, they could also be expressing other emotions such as anxiousness or despair.

The approach to understanding their tail wags is to combine them with all of the other contextual cues they are providing. What are their ears doing, what are their eyes doing, and how is their posture?

Observing these details will also help you understand why your bichon is wagging its tail.

Here are a few things the tail might be conveying to you:

Is It Normal for a Bichon Frise to Chase Its Tail?

If your bichon frise is chasing its tail, it is most likely just a harmless and cheerful play. Puppies do it a lot since they’re so playful and curious about their surroundings, as well as exploring their fun long tails.

If your pooch chases his tail, it could be because he’s bored or because it’s a nice game for him. The problems arise when your dog obsessively chases its tail and appears to be in distress or frustrated, or when it bites its tail, causing bleeding or hair loss.

If this is the case, you have every right to be concerned. This behavior could be due to a variety of factors. Here are some things to look out for:

How Should You Groom Your Bichon Frise’s Tail?

The tail of a bichon frise is usually left full and uncut. The stunning plume flowing from their back end adds to their aesthetic allure. That said, it does need grooming.

While you don’t need to brush their tails every day, bichons will benefit from an overall brush two or three times a week to keep out the mats and knots away from their long, flowy coat.

To detangle the knots of your bichon’s tail hair, begin at the ends and work your way up. The tail, like the ears, has long fur that can easily trap debris and dirt, leading to entanglement.

Don’t brush up from the bottom as you would on the face and body. Rather, start brushing from the ends of the hair and gradually make your way nearer to the skin until you can easily move the brush all the way through the fur from roots to tips.

If you come across any particularly difficult tangles, use a greyhound comb and detangling spray to help you work your way through them. In a separate article, I wrote more about detangling a bichon frise.

The most common causes of hair loss in many dog breeds are depression and anxiety. The psychological health of your dog is just as significant as his physical well-being. Sadly, the bichon frise has more hair loss and skin issues than many other dog breeds.

There are a few possible causes for your bichon frise’s tail hair loss. We’ll go over a few, but it’s critical that you seek advice from your dog’s vet for a professional medical assessment:

Should You Get Your Bichon Frise’s Tail Docked?

Bichon frises are not a breed whose tails are typically docked. Tail docking is a controversial topic that has many breeders and veterinary professionals disagreeing in an endless debate.

Many people believe that tail docking is cruel and unnecessary, and as a result, there are a number of countries where the practice is now illegal.

In the UK, for instance, it is illegal to dock a dog’s tail unless it is for medical reasons. The same is true in Australia, where tail docking was banned in 2008. New Zealand has also recently followed suit, with a ban on tail docking taking effect in 2015.

In the US, there is no nationwide ban on tail docking, but a number of states have enacted their own laws against the practice. Overall, it is clear that the trend is moving towards banning tail docking, in order to protect dogs from unnecessary cruelty.

It turns out that a dog’s tail is much more than just a furry appendage. In fact, a dog’s tail plays an important role in its overall health and well-being.

When dogs run and play, their tails help them to maintain their balance and avoid accidents. In addition, dogs use their tails to convey a wide range of emotions, from happiness and excitement to fear and anxiety.

By understanding what your bichon’s tail means at any point, you’ll better understand your beloved pooch!