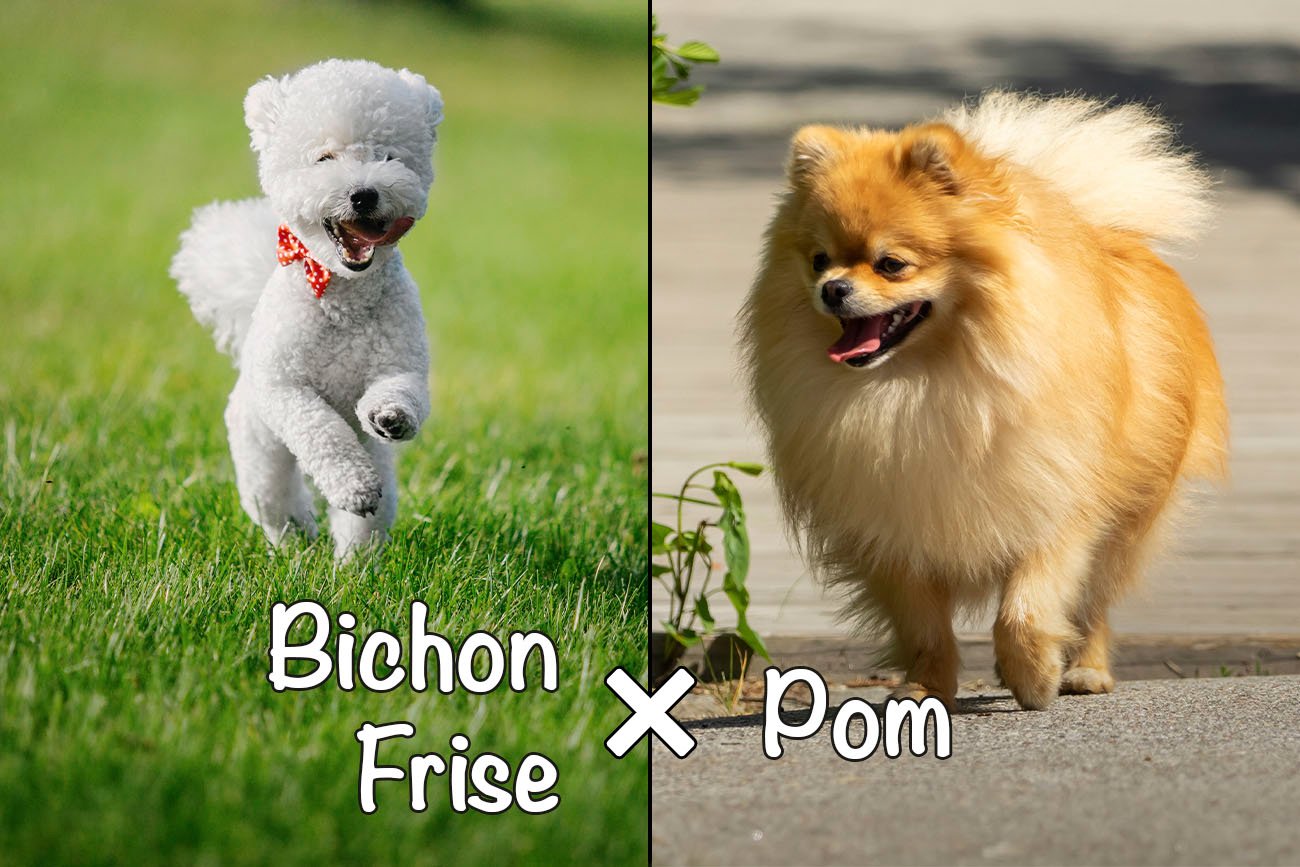 Are you looking for the perfect family dog? A bichon frise and Pomeranian mix may be exactly what you need. The lovely hybrid combines the best of both worlds, was designed specially to be a companion dog and will charm you in no time.

Below, we’ll have a closer look at everything you should know about a bichon-a-ranian.

The mix between a bichon and a Pomeranian is called a bichon-a-ranian, pom frise, or pomachon. It is one of the newest designer dogs and one of the most beloved mixes. Even compared to other hybrids, bichon-a-ranians are quite rare.

The mix between the loyal, smart Pomeranian parent and the cheerful bichon frise may be little documented, but fortunately, we know plenty about its parents.

The bichon frise is native to the Mediterranean region and its origin can be traced back to the 14th century when it was a beloved companion dog among sailors. The Pomeranian was discovered by Queen Victoria when she visited France and she introduced the breed to England, where it became very popular.

The pomachon crossbreed is believed to have first appeared, out of all places, in Afghanistan.

Bichon-a-ranian is small, fluffy, and looks more like a toy than a real dog. It’s a happy little pup with a very frail body, but it keeps its posture with royal elegance.

The nose is black and shiny, while the eyes are round and dark. The pup’s ears may differ based on which parent’s traits it inherits, but sometimes they are medium-sized and semi-erect. The neck is short and the tail is curly and fluffy.

The coat of a bichon frise is usually white, but a pomeranian may come in different colors, so it’s difficult to pinpoint a specific coat color for bichon-a-ranians. It depends on which parent’s color it inherits, so it could be any shade from pale white to brown or black.

The coat will most certainly be fluffy and soft, but can be curly, wavy, or straight. If it takes more after its bichon parent, the coat may require daily brushing, but some bichon-a-ranians may only need frequent clipping.

A bichon-a-ranian’s size may also depend on genetics. In general, it’s expected to be slightly bigger than its Pomeranian parent but smaller than a bichon frise (8-11 inches). Similarly, it may weigh between 6 lbs and 15 lbs, which is the average weight of its parents (heavier than a Pom and lighter than a bichon). 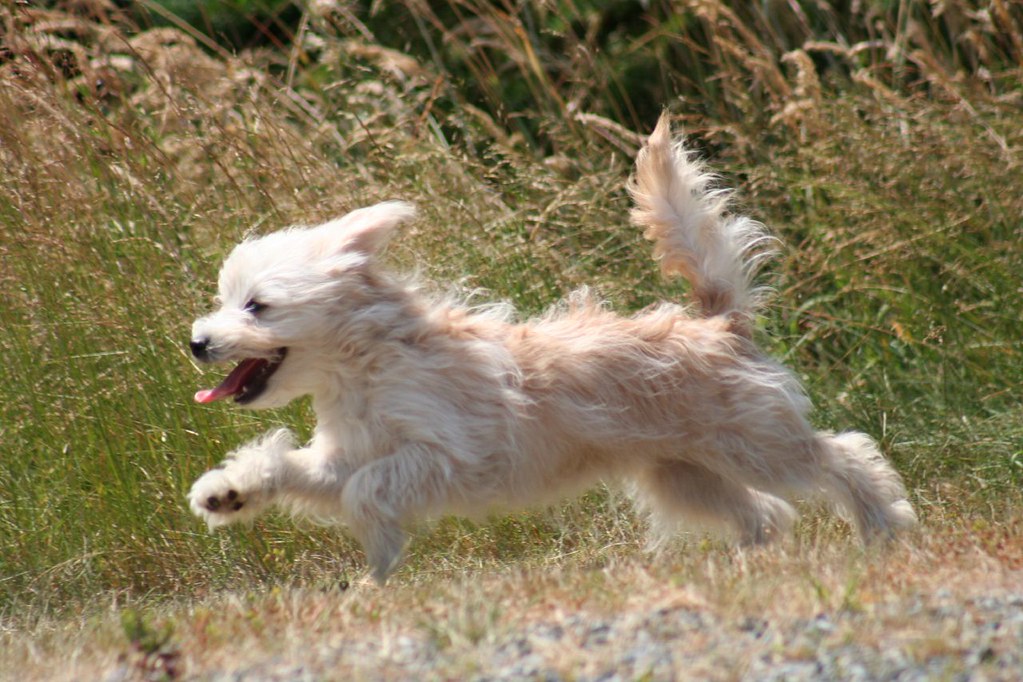 Now, let’s take a look at what it takes to keep a bichon-a-ranian.

Pomachons may require more or less maintenance, depending on the type and size of their coat. Long, fluffy, and curly coats require daily brushing, while straight, shorter fur can be maintained healthy with regular clipping. This depends on which parent’s traits your pup inherits, and it’s impossible to know beforehand.

Regardless of the coat type and size, it’s important to keep it clean and free of tangles and mats. This will help your pup avoid skin allergies, itchiness, and infections, which is especially important as the bichon parent is known for its sensitive skin.

To be on the safe side, make sure you brush your bichon-a-ranian regularly. If your hybrid is more similar to a Pomeranian, brushing only twice per week may be enough to remove all the dirt and tangles.

A bichon-a-ranian should also have its nails and facial fur trimmed regularly. In addition to this, daily teeth brushing should be a must for a healthy grooming routine, along with checking its ears (if necessary).

As a result, depending on which parent’s traits are inherited more, your bichon-a-ranian may require more or less grooming. The puffy look may need to be maintained daily, but other pups will do just fine with brushing once or twice per week.

None of the hybrid’s parents are very active breeds, so your bichon-a-ranian will stay healthy and happy with a couple of walks per day for a total of 30 minutes. You need to play with your pup frequently as games will not only keep it active and entertained but also provide much-needed mental stimulation.

Although small, bichon-a-ranians are not lazy lap dogs, so you still need to provide some fun time outdoors – walking, playing, or both. Both bichons and Pomeranians are smart and love to explore, so they need some mental exercise to go along with the physical ones. You may want to invest in some fun toys or puzzles to keep them entertained.

The cuddly bichon-a-ranian is ideal for small apartments or larger houses.

If possible, access to a yard would be great to provide the much-needed daily activity. However, these hybrids will be as healthy and happy living in a small apartment.

As long as you take them out for a short walk twice per day, their activity requirements will be met.

Bichon-a-ranian temperament is sweet, loving, and loyal. These lap dogs tend to form very close bonds with their owners – and they love following their owners everywhere and getting involved in any activity.

Despite the toy size, its personality is quite big – and it may not like to be pushed around by kids. Bichon-a-ranians may get nippy and are hurt easily due to their frail bodies, so they should be supervised all the time when they are with small kids.

Pomachons have a personality of their own, and many owners may even consider them quite stubborn. A bit feisty, the pomachon benefits from early training, and the pup should be treated just like any other dog (and not a toy or a baby, despite its looks).

This hybrid may integrate well in a family with other pets – as long as they are introduced to new pets and people as early as possible. There may be some slight food aggression issues or chasing the small pets, but they can eventually adapt quite well to new environments and new households. If you have any other small animals that could be chased by your puppy, make sure you introduce the pooch to the existing pets slowly.

In addition to this, bichon-a-ranians form close bonds with their owners, so they suffer if they are left alone for an extended period of time. They can develop separation anxiety like the bichon frise, so it’s important that a bichon-a-ranian owner spends plenty of time at home.

Bichon-a-ranians inherit their parents’ intelligence, so it’s considered a smart hybrid. Both parents are known for their ability to learn tricks and commands, especially when positive training is used.

The hybrid may be a bit stubborn and sassy (both of its parents are!), but lots of treats, praise, and its love to see its owner happy will win in the end. Bichons love to perform, so the pooch should not be difficult to train.

If you are a first-time owner, you may find training the pooch quite difficult. Training sessions must be kept brief and varied, so that the puppy does not lose interest. It’s always a good idea to opt for a professional trainer if you want to obtain quicker results. Otherwise, if you decide to take on this task, make sure you stock up on treats.

One of the main benefits of adopting a hybrid rather than a pure breed is that they tend to suffer from far fewer health issues than their parents. Some designer breeds are specially created to eliminate the high chance of developing genetic disorders or inheriting the flaws of their parents that may lead to health conditions.

In general, your bichon-a-ranian will be a healthy pooch as long as you provide a healthy diet, daily exercise, and have a consistent maintenance routine.

The hybrid is relatively recent, so there is little information on whether it’s prone to specific health problems. However, it’s fair to assume that it’s sensitive to some of its parents’ potential health issues. This does not mean that your hybrid pup will inherit any of them – just that it may be at a higher risk than other dogs.

To identify and solve health issues efficiently, you should schedule regular vet visits who will perform general check-ups. Some of the main health issues that its parents suffer from include kneecap dislocation, also known as patellar luxation, eye issues (like infections, especially if facial hair is not kept short and clean), hip dysplasia, and dental issues (when there is no regular teeth brushing), and others.

Fortunately, these can be avoided through preventive care and are more common with senior dogs. As your pooch gets older, it becomes more sensitive, so you need to dedicate more time to caring for a senior dog than an adult dog. Puppies are also sensitive, so they should not over-exercise and they need to be taken to a vet regularly for vaccinations.

A bichon-a-ranian has a high chance to lead a long, happy life. First, it’s a small breed, and small breeds tend to outlive larger dogs. Secondly, hybrids benefit from genetic variation and are at a lower risk of developing health issues, which means a higher likelihood to outlive their purebred parents.

Bichon-a-ranians are fairly new, so it may be difficult to accurately state how long they will live, but they may reach 12-16 years. Proper care, diet, and activity are key factors that will impact your pup’s lifespan.

Bichon-a-ranians are small dogs, so it’s important to check with your vet what type and how much food you should feed your dog. Overfeeding leads to weight gain and even obesity, which can cut its life short and generate many other health conditions.

It’s best to consult your vet regarding your puppy’s nutritional needs. The vet will be able to guide on which type of food and how much to feed it based on its age, activity level, size, and other unique factors.

Lastly, let’s take a look at some other things worth knowing before you make a decision.

Although bichon-a-ranians are a new designer crossbreed, this doesn’t mean that they are not extremely popular! In fact, you can find many hybrids that are second-generation – which means that their parents are hybrids, as well, and not purebred dogs.

Before choosing a bichon-a-ranian, you should consider if you want a first-generation or a second-generation hybrid. Just like with all hybrids, it’ll be very difficult to predict how your hybrid puppy will look and behave as an adult.

Did you know that bichon-a-ranians are diligent watchdogs?

Although the small size may not clue you in, the bichon is a watchdog that loves to alert you when strangers come close. Excessive barking may be an issue if you live in an apartment, but you can eliminate it through training.

However, this quality also depends on whether it is a first-generation or second-generation hybrid.

Is Bichon-A-Ranian the Right Breed for You?

Bichon-a-ranians are loving companions with distinct looks and behaviors.

Although they look like a toy, they have a well-rounded personality and have an intense need for care, attention, and possibly grooming. The pomachon is happy and lively but may get snappy if pushed around too much. They are the perfect companions for any household and can adapt very well to small apartments, too.

Although it can be quite stubborn and sassy sometimes, this smart crossbreed can be trained fairly easily.