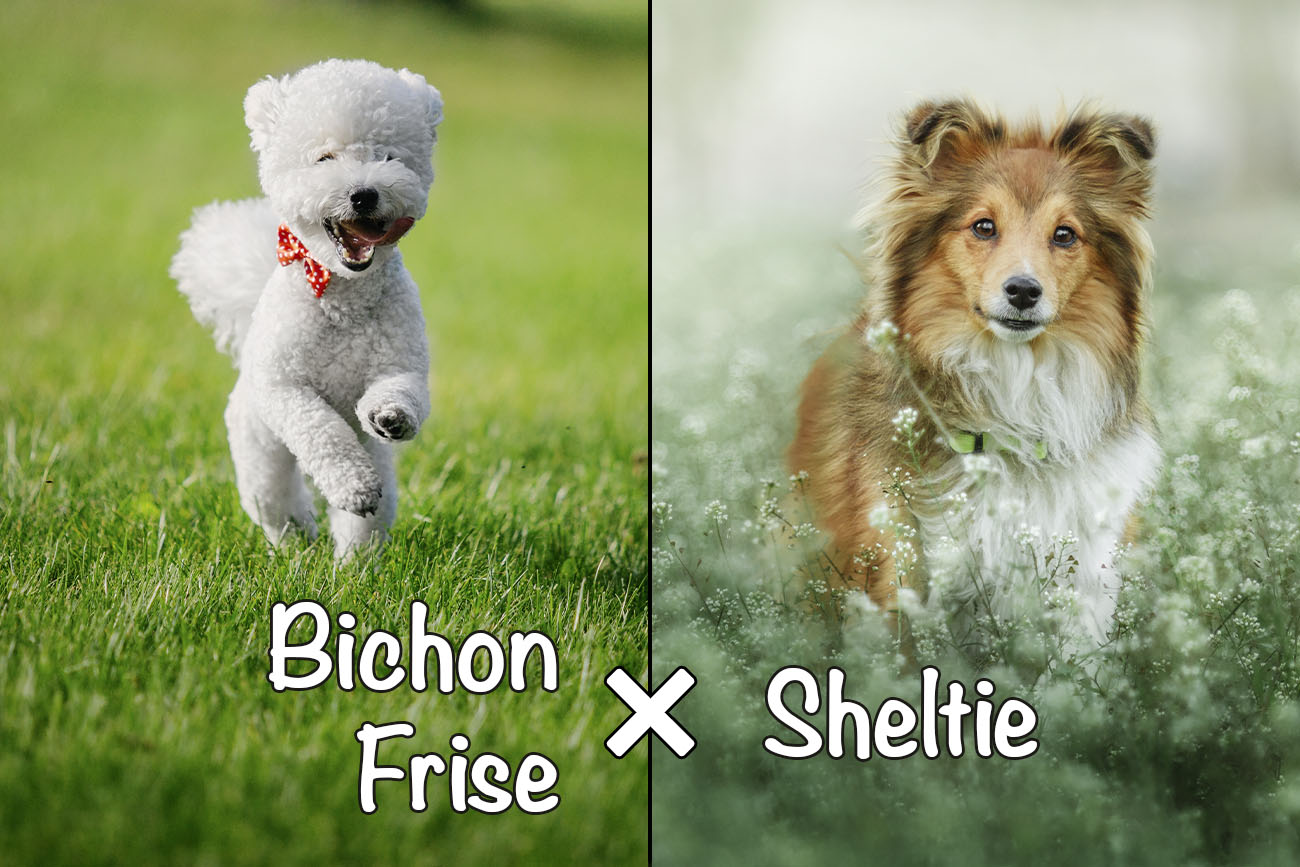 A Shelcon is a bewitching cross between the elegant Shetland Sheepdog and the lovable, affable bichon frise. Both parent breeds are small to medium dogs, and the Shelchon, also known as the Sheltie Bichon, is likely to be a medium-sized, scrappy hybrid that is smaller than the Sheltie and larger than the bichon.

In order to understand this new bichon frise mixed dog breed, we will have to understand the two parent breeds a little better. In this blog post, we’ll look more closely at the two as well as all you need to know about the hybrid.

Their forebears are thought to have included King Charles Spaniel and the Pomeranian. The early dogs were known as “Toonie” dogs, which translates to “farm dogs.” Some were moved to the United Kingdom, where they were mixed with rough-coated Collies by initial breeders.

They were previously known as Shetland Collies, but this was withdrawn after Collie breeders objected. The Shetland Sheepdog was recognized by the American Kennel Club in 1911.

The Bichon Frise originated on the Mediterranean island of Malta and is connected to the Coton de Tulear, Bolognese, Havanese, and Maltese. The Barbet, a woolly water dog, is supposed to be one of the Bichon’s forebears, with some claiming that the name Bichon is derived from “barbichon,” a derivative of the term barbet.

According to sources from the 14th century, French sailors carried the dogs back from Tenerife, one of the Canary Islands. The adorable small dogs were extremely famous in Spain and appeared in Goya’s works.

They eventually fell out of favor with royalty and were exploited as circus performers when their endearing characteristics continued to enchant spectators. In 1933, France adopted the official breed standard. The bichon frise was introduced to the United States in 1956, and the American Kennel Club recognized the Bichon Frise Club of America in 1975.

The cross of both purebred dogs is called a Shelchon, or a Sheltie Bichon. They are medium sized dogs that are sweet, cheerful, and make excellent family pets.

While they don’t have aggressive tendencies, they can be a little reserved around strangers and have a strong herding instinct that might cause them to nip.

The Shelchon is a moderate-sized mixed breed with a round head and a pointed nose. They are a cross between a purebred Shetland Sheepdog and a purebred Bichon Frise, and they will have the appearance and qualities of both parents.

White, brown, tan, cream, black, and sable are common hues, and they also have medium to long, dense double-layered coats. Their hair can be silky and somewhat wavy, similar to that of a bichon frise, or straight and longish if they take after the Sheltie parent.

The Shelchon has round, dark brown eyes, a black nose, and an attentive, curious demeanor. Their tails can be plumed and fairly long, and their ears can be positioned pretty high on the forehead.

Shelcon is a small breed dog having a height of up to 12 inches and weight of 15 to 30 pounds. This mix breed has a lifespan of around 12 to 15 years. 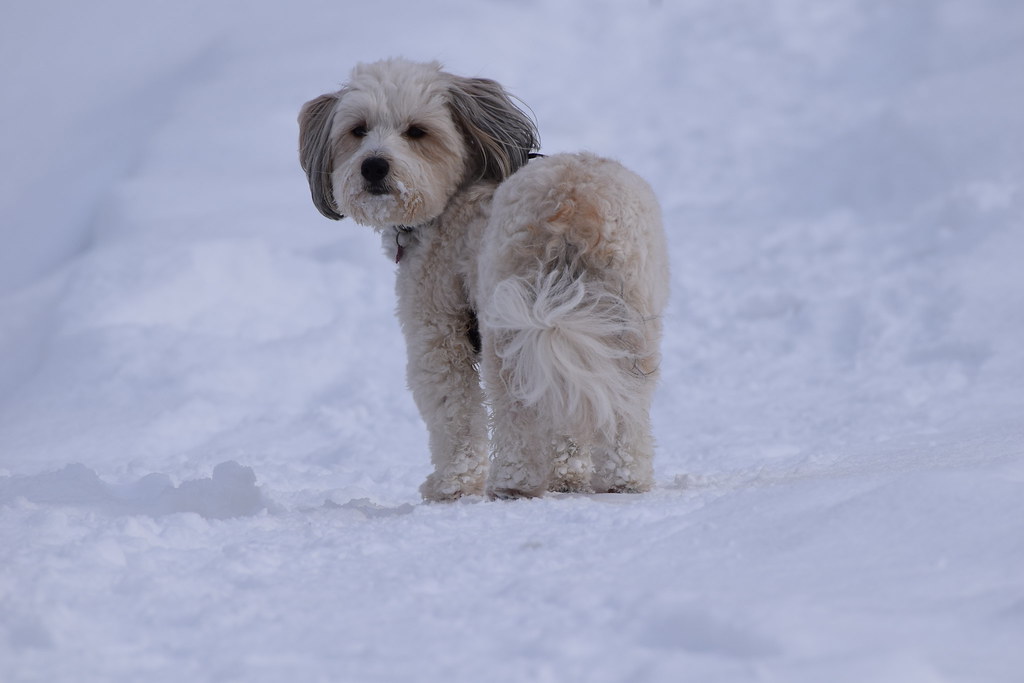 Like all dogs, Shelchons benefit from the occasional TLC.

Shelchons can shed a lot and will need frequent brushing to remove the dead fur and dander. They shed particularly during the hottest times of the year.

This breed is also prone to environmental and food allergens, so proper grooming and hygiene control in their environment are crucial.

Their long coats might also have to be trimmed regularly, either at the groomers or if you are skilled at doggy haircuts, at home.

Shelchons are clean dogs that require a bath every once in a while with conditioner applied to keep that luscious coat gleaming.

Like all dogs, they will need their nails every four to six weeks, and their eyes and ears cleaned with a vet-approved solution.

Bichons are prone to tear stains, so check your Shelchon’s eyes regularly and keep those stains away. Their floppy ears should be also cleaned and checked regularly for mites, wax, and debris buildup.

These active canines require frequent exercise and their playful demeanor will appreciate loads of games. They are versatile dogs that will do well in both hot and cold weather, just make sure that they aren’t exposed excessively to either extreme.

A Shelchon is a lively dog who enjoys running and will excel at games such as flyball or frisbee. They will like walks to the park or the seashore, but keep them in control because they can have strong hunting and herding tendencies which might cause them to chase other animals.

These intelligent dogs require ample mental and physical stimulation to keep them from boredom, which might lead to reckless behavior and frequent barking.

They are medium-sized dogs with moderate energy levels and can do well in apartments or smaller living spaces as long as they get enough exercise.

The Shelchon is a clever, well-mannered, and appealing dog. Excellent companion dogs and happiest when surrounded by loved ones,  they despise living alone and can be prone to destructive tendencies if left alone for long periods.

They make excellent companions for youngsters but are suspicious of strangers. Shelchons are good alert dogs and will bark if they spot a stranger, so they may be extremely protective despite their little size. Because they have a strong herding tendency and are prone to bark or bite when aroused, early training and socialization will help them get acquainted with any other pets in the family.

They may have a herding tendency like their Sheltie parents. Some of these dogs may run around, bark, and bite at smaller creatures like cats, rabbits, and squirrels. Because the Shelchon dog is predisposed to barking, puppies require early and extensive socialization to control their barking tendencies.

They are sensitive dogs, and will respond only to positive reinforcement and loads of rewards.

Shelties and bichons are relatively healthy dogs that can live around 12 to 15 years. However, like any dog, certain genetic conditions plague both the parent breeds.

Some problems that can arise include:

Cancer of the Bladder

This breed is prone to a kind of tumor known as transitional cell carcinoma. Because transitional cells line the urinary tract, these tumors generally develop in the bladder or urethra, resulting in blood loss and pain or trouble peeing.

This trait, which is also observed in Rough Collie, is more accurately known as choroidal hypoplasia, and it depicts the abnormal development of sensory structures within the eye. This is a congenital condition that can be detected in the first few weeks of birth by diligent veterinarian inspection.

This is a progressive liver disease with a prolonged course in which the liver gets extensively damaged as a result of inflammation. This inflammatory disease’s cause has yet to be determined. Early identification and therapy can keep the illness under control in most dogs for a long period, but it eventually causes functional liver damage.

Dermatomyositis, another disorder with an unclear cause, is characterized by deep-seated inflammation of the skin and underlying muscle, resulting in bleeding ulcers, skin infections, and discomfort. It is an uncommon illness that can be noticed as early as four months of age and is readily misinterpreted for a variety of other more prevalent disorders.

A skin biopsy is necessary to diagnose the condition, and it responds effectively to medicine in most cases, however, treatment would be required for the rest of the dog’s life.

Haemophilia (A and B)

Shelties are prone to these two genetic illnesses that cause blood clotting processes to malfunction. Inadequate production of clotting factors VIII or IX is caused by genetic defects.

Though hip dysplasia is more generally associated with big breeds, it is also common in the Shetland Sheepdog and is a leading cause of disability and osteoarthritis in middle-aged and elderly dogs.

Breeders must properly examine their breeding dogs by subjecting them to hip x-rays to clear them of genetic faults.

Immune system malfunction, resulting in lymphocytic thyroiditis and thyroid inadequacy, is frequent in the Sheltie and several other breeds. Owners typically report hair loss, weight increase, and exercise intolerance, but laboratory testing is required for a conclusive diagnosis.

Ivermectin is an anti-parasitic medicine that is commonly used in livestock but is occasionally given to dogs, for example, in instances of resistant infestation. Shelties and other Collies frequently have a deficiency in a certain gene (called MDR1), which means they might respond very adversely to this medicine.

In affected dogs, neurological indications such as blindness and convulsions appear quickly after therapy begins. A blood test for this anomaly is available, and it should be conducted on every Sheltie or other Collie being evaluated for ivermectin administration.

Degeneration of the retinal tissues in this condition begins in middle age and develops to produce blindness. Unfortunately, no cure is available, and dogs carrying this condition must not be bred.

A rare immune-mediated disorder in which the body’s natural defense mechanisms attack proteins within cell nuclei. This can cause a variety of symptoms depending on which system is most badly damaged, but skin sores and disabilities are common.

Shetland Sheepdogs are susceptible to a particularly severe version of this genetic illness. Platelets in affected animals are defective, as are the white blood cells responsible for blood clotting. While many other breeds deal with this illness as a minor inconvenience, most Shelties with VWD do not live to adulthood.

Is Shelchon the Right Breed for You?

A Shelchon is probably an amicable, friendly dog that makes a wonderful addition to many households. Their easy-going personality and loving nature make them ideal for several types of households.

Active owners of all ages that have the time and energy to provide a Shelchon with the exercise it needs will do well with this gentle, loving dog. However, a marathon runner or mountaineer might be a tad much for this diminutive breed. While Shelties are bred for athleticism, bichons frises are primarily companion dogs.

One thing a Shelchon is likely to be is extremely attached to their owners, unlike other breeds that can be independent and like spending heaps of time alone. In this case, a household where all the family members are not present for most of the day might not suit a Shelchon, which can be prone to separation anxiety.

Families with small children might also suit a Shelchon that is likely to make an ideal playmate. However, because of their small size, children have to be properly taught how to play with a small dog without accidentally injuring it.