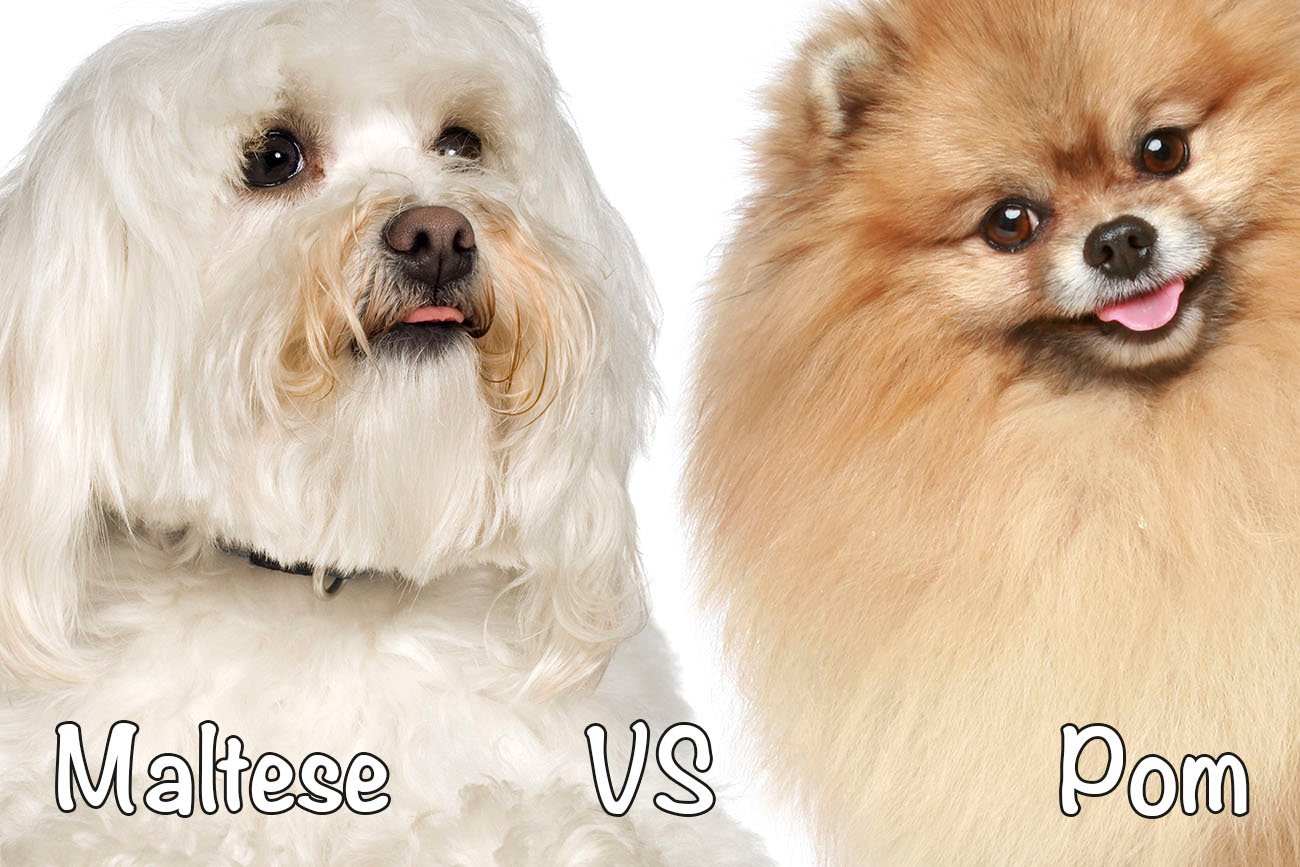 Small dog lovers may well be torn between getting a Maltese and a Pomeranian, and there are plenty of compelling reasons to bring home both breeds. The two breeds, however, suit different households and lifestyles – and that is something important to consider.

Continue reading to learn more about them and find out which – if either – is best suited for your household.

Maltese vs. Pomeranian: A Detailed Comparison

Let’s start by comparing the two breeds side by side.

Both breeds have been around for quite some time.

The Maltese’s history is less certain than that of the Pomeranian. Experts know that the Maltese has been around long enough to be dubbed an “ancient” breed, and there is evidence of them dotted throughout history – even Aristotle mentions them! But where exactly they originated, and when exactly is a mystery to experts.

One theory states that the breed came from the Isle of Malta, where it is thought that the breed developed from other spitz-type breeds from around the Mediterranean Sea. A similar theory traces the breed’s origins back to Italy. Alternatively, some people believe that the Maltese is a descendant of some of the East Asian spitz-type dogs.

Wherever this bichon-type breed came from, it has been well-beloved ever since. The breed was especially popular in 16th-century England and 18th-century France, where it was a popular pet among royals and aristocrats. Around the fin-de-siecle of the 17th century, there was a crisis when the breed was bred to be too small, and it almost went extinct. Luckily, breeders saved it by breeding Maltese studs with Poodles, Spaniels, and East Asian dogs.

The history of the Pomeranian, on the other hand, is much more traceable. Originating in the province of Pomerania in Germany, the breed is a descendant of ancient spitz-type breeds. The breed was originally significantly larger than it is now, weighing around 30 pounds. Since then, it has been bred to be small and has become a popular pet across the world.

The breed made its way to the US in the 1800s, after arriving in the UK in the 17th century, and it continued to be appreciated stateside just as it had been elsewhere. By 1900, the breed was officially recognized by the American Kennel Club.

Throughout history, the Pomeranian has been a popular pet among large names, with people such as Martin Luther, Isaac Newton, Mozart and Queen Victoria having owned a Pomeranian as a pet.

Despite both breeds developing from spitz-type breeds, they are not noticeably similar in appearance. The Maltese have silky white hair that is almost dead straight and thick, covering the entire body from head to toe. Unlike most spitz breeds, the Maltese has a round skull with a black nose, dropped ears, and dark, small eyes.

Resting on short legs, the breed stands between 8 and 10 inches tall and usually weighs up to 7 pounds.

The Pomeranian, on the other hand, has the characteristic wedge-shaped head, erect ears, and plumed, curled tail. The breed has dark, almond-shaped eyes and a coat that can come in a huge array of colors, from black and chocolate to cream and sable.

The breed is about the same size as the Maltese, if not slightly larger, measuring between 7 to 12 inches tall, and can weigh anywhere between 3 and 7 pounds.

As smaller breeds, both the Pomeranian and the Maltese have quite long life expectancies. Small breeds have slower rates of aging than larger breeds, as well as slower metabolisms, and this results in fewer structural injuries, as well as a longer life overall.

The Maltese is a lively breed with a lot of personality that absolutely adores people.

The breed is incredibly sweet and trusting, and so forms bonds with people very quickly. They are rather eager to make friends and love a good cuddle but are also often one of the most spoilt breeds out there. This is at no fault of the owners – the breed just has a tendency to get exactly what it wants, all of the time!

The Pomeranian is known for its tendency to yap and bark, and whilst this is a characteristic of the breed’s personality, it can be controlled. Aside from the noisiness, Pomeranians are usually very extroverted, lively, and excitable. They are bubbly little dogs and are always watching their surroundings. Alert and inquisitive, the breed love going to new places and exploring.

Anyone who is looking to keep a well-behaved dog should definitely make sure they opt for a breed that is both relatively intelligent and also willing to learn. Stubborn breeds or those with short attention spans are often incredibly difficult to crate train and teach most obedience tricks to.

The Maltese is a relatively smart breed that is more than eager to please, and so those who do want a breed that will do as they ask should be safe with this breed. Maltese love positive reinforcement and are capable of learning basic obedience tricks as well as some intermediate skills.

The Pomeranian is slightly more difficult. The breed is smart, but in order for training to stick it should be started at a young age. Socialization and training from a puppy will help to prevent a Pomeranian from resource guarding and barking. Pomeranians are also known to have incredibly short attention spans, making training that little bit harder.

A dog’s intelligence is also an important consideration when it comes to thinking about how to keep them happy. Intelligent dogs require more mental stimulation, so breeds like the Pomeranian and the Maltese will need various enrichment activities to enjoy throughout the day to keep them from developing anxiety or acting out.

This factor is often overlooked, but in reality, grooming can be a burden on owners who are not prepared to do it. Grooming must be done to a high enough standard in order to keep dogs comfortable and free from rashes and infections. If unable to do it themselves, owners should pay a professional groomer.

When it comes to these two breeds, the Pomeranian is significantly lower maintenance than the Maltese. The Maltese has a coat that mats easily, and as such it requires brushing every day. Since the coat is white, bathing once a week is also recommended, and the breed will require face cleaning after meals and throughout the day to avoid staining.

Alternatively, the Pomeranian needs a brush once a week with a wire slick and comb, and will only need bathing when necessary (i.e., if dirty or smelling). The breed is, however, a moderate shedder and sheds its undercoat once a year. During this time, the dog will require more regular brushing.

An obviously important factor to consider is how much each breed will cost. Upfront costs are important, but owners should also think about how much the breed will cost in food each month as a minimum, in order to ensure that they can afford to keep that dog well-fed and happy.

Every dog breed has a certain number of health conditions that it is predisposed to, just like most families do. These health conditions can often be avoided or worked with and soothed with adequate veterinary care. But, nonetheless, they are important to know about. Those choosing a breed should be aware that these predispositions may make veterinary insurance more expensive, and may incur further costs down the line.

The Maltese is, for example, prone to patellar luxation, portosystemic liver shunt, progressive retinal atrophy, hypoglycemia, white dog shaker syndrome, collapsed trachea, and reverse sneezing. Many of these are far from fatal, but they may make owning a Maltese too difficult for some owners.

The Pomeranian, on the other hand, is prone to allergies, epilepsy, eye problems, hip dysplasia, Legg-Perthes Disease, patellar luxation, collapsed trachea, and dental problems. Again, luckily, many of these are not fatal and the breed would be able to survive with them as long-term conditions.

As small breeds, both the Maltese and the Pomeranian do not require huge amounts of food on a daily basis. Providing them with too much food can lead to obesity which can exacerbate and cause many of the predisposed health conditions.

To maintain a healthy weight, both breeds need between ¼ and ½ a cup of high-quality dry food each day. For wet foods, follow the instructions on the tin or sachet.

Maltese vs. Pomeranian: Which Should You Get as a Pet?

In addition to all of these factors, it is also worth considering whether or not the breeds suit your requirements and your routines.

For example, those living in smaller homes or apartments should make sure that they have ample space for a breed. Luckily, with these two breeds, apartments and homes are both well-suited. The breeds are only small, and even when they have bounds of energy will not need huge amounts of space. So long as enough exercise is given, a home without a yard is no problem.

Likewise, households with children should be very careful about which breed they choose. Some dogs do not fare well with children simply due to the amount of patience it requires, and others cannot handle the sharing of attention. In this case, neither breed is well suited to very young children, purely due to their size. They are, however, more than capable of living with teens and older children without much quarrel.

Busy working owners should also be aware that not all breeds are capable of being left alone. The Maltese, for example, can only be left alone for a couple of hours at a time. If work requires owners to leave the house for extended periods of time, they should opt for the Pomeranian, who is happy to be alone for between 6 to 8 hours.

Other pets are also a key consideration – many breeds will show aggression towards other dogs and often try to hunt smaller pets. This is not conducive to a comfortable home, and as such should be avoided. When it comes to Pomeranians and Maltese, though, both breeds are fine with other animals. Although owners should be aware that the Pomeranian will often forget how small it is when interacting with other animals!

Both the Pomeranian and the Maltese are great pets to have around. Cute, cuddly, and full of love, they form great bonds with their humans very quickly. The breeds are fun to have around, but they both require a reasonable amount of attention throughout the day in the form of mental stimulation and exercise, and are both quite high maintenance when it comes to grooming. 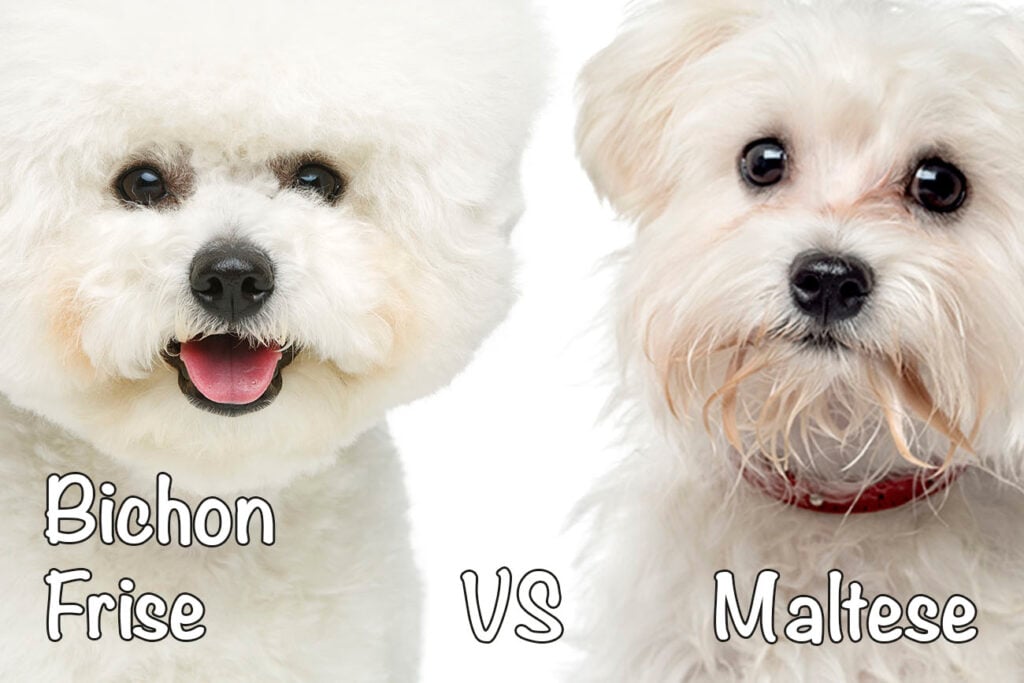 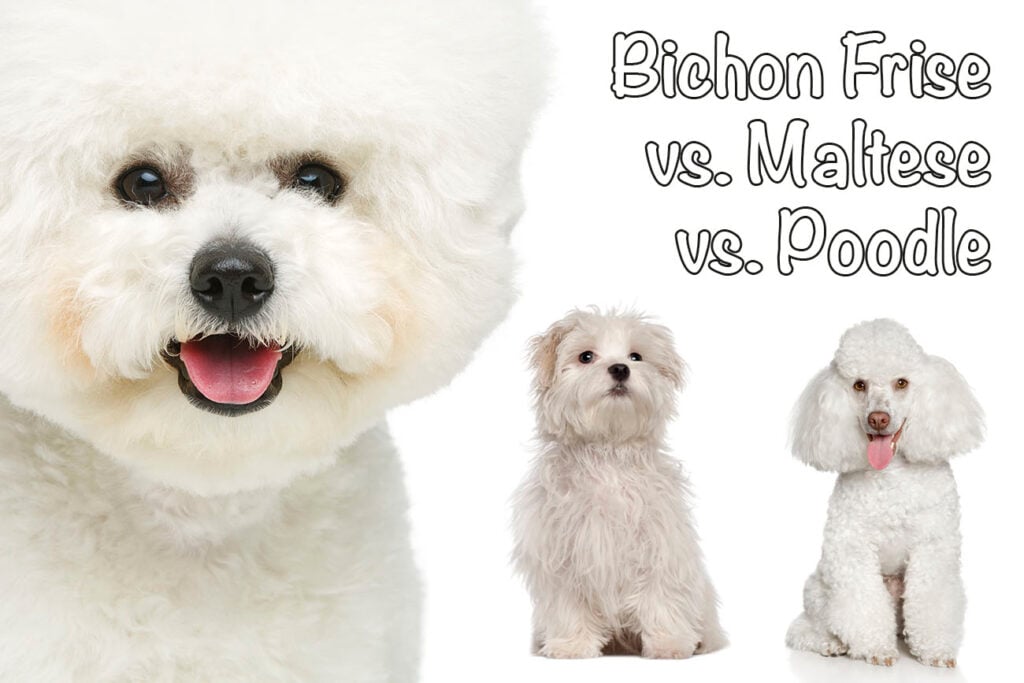