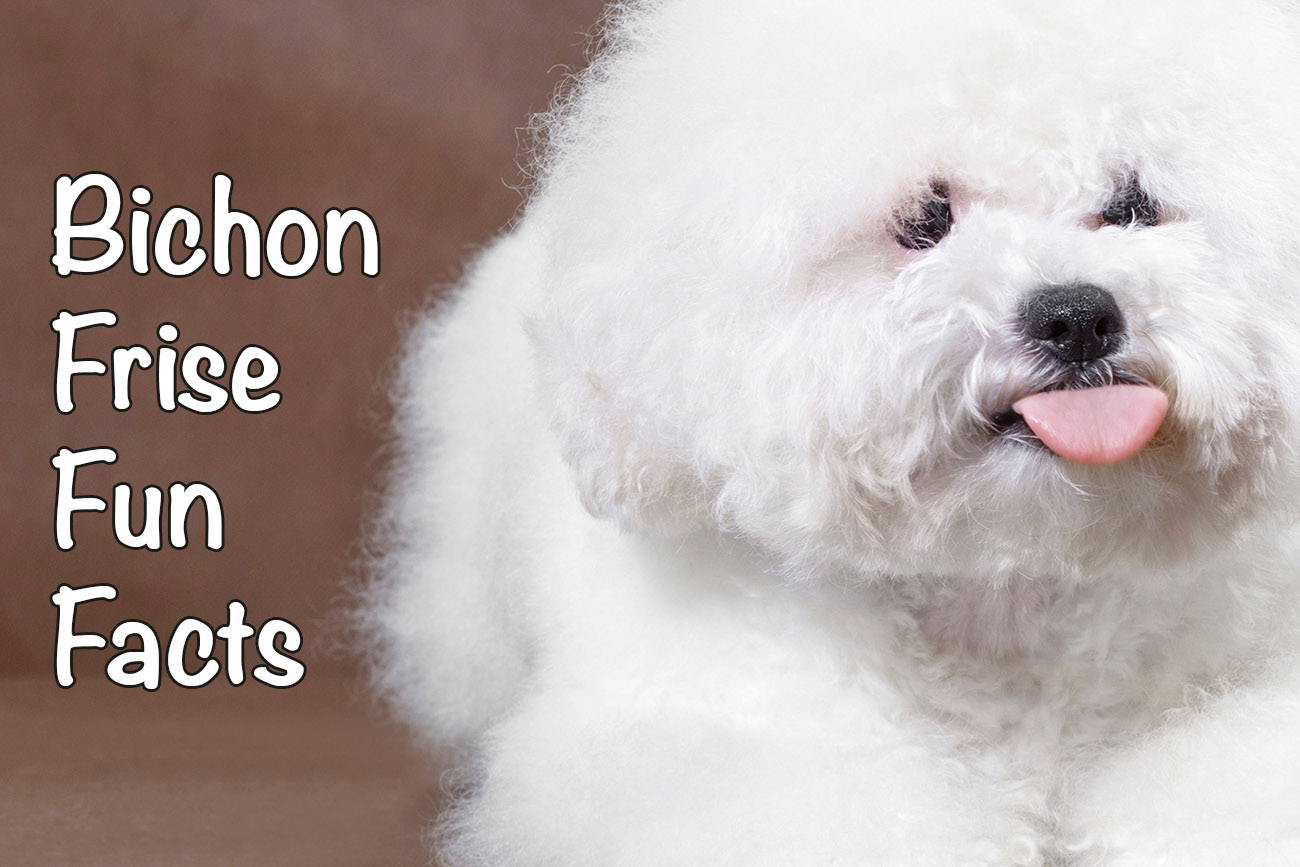 Seeing a bichon frise will probably result in love at first sight because they’re undeniably cute and adorable. These fluffy babies are known to be fun, caring, and sweet! They can form loving bonds with their human families and they are great with children too.

There are a lot of other things we have yet to uncover with bichons, so let’s look at 14 fun facts about this breed.

1. Their name can mean a lot of things

The name of bichons frises is pretty interesting because there really isn’t one certain definition of what it means.

For starters, the word “bichon” is French for “small dog” while the word “frise” is French for “curly.” That said, it’s also related to the English word “bitch,” for a female dog. Other cynologists believe that the breed was also derived from the dog barbet, so the name “bichon” was also believed to be a short term for “barbichon”.

Right now, we understand the meaning of “bichon frise” to most likely be “curly lap dogs” in French.

2. They are quite the entertainers

The bichon frise became very popular during the French Renaissance period which was in the 16th century. They were King Henry III’s favorite breed. They were pampered and deeply loved as a royal dog.

At that time, pampering bichons became a trend to an extent where the word “bichonner” became a verb that meant to make beautiful or to simply pamper. However, in the 19th century, bichons started to be seen as common dogs and became famous as entertainers. They were used as circus performers. This is because of their playful or clownish personality.

They are also natural performers with their tricks and their ability to draw an audience.

These cute babies have been around since the 14th century. They originally lived on ships to be great company for Spanish sailors and to be used as exchange for when the sailors have reached their destination. This is also why they have arrived and bred in different countries.

Though some may assume that they originated in France, they are actually from Spain. It is, however, the French people who have developed the bichon frise into a lapdog. These original bichons frises were formerly known as bichon Tenerife as they were once found and bred purely on the Canary Island of Tenerife, located off the coast of northern Africa for years.

There are three other breeds: the Maltese, the Bolognese, and the Havanese.

4. They can stay around for as long as 19 years

It is great that these cuties can stay around for a long time. On average, a bichon’s lifespan may reach up 13-15 years but the oldest bichon known to have lived stayed for 19 years.

The lifespan of these dogs may vary with where they live. According to a survey conducted regarding the lifespan of dogs, in Canada and the United States, their average life expectancy is up to 12 and 13 years while in the UK,  the Bichon Frise could live up to 16 years.

5. They are considered to be hypoallergenic

Yes, these fluffy dogs have such adorable-looking fur and the good thing about it is that they are hypoallergenic too! They shed very little compared to other dogs with coats as dense them. This reduces the fur left on clothes, couches, and beds.

So you can freely snuggle with them without the risk of allergies. Of course, before doing so, you should check with your doctor, though.

6. They are great to travel with

As mentioned earlier, bichons frises have traveled with sailors during their breed’s early years. They were also adopted by Italian sailors who took them on long travels by sea. They’re proven to be great companions for travel because of their intelligence which is great for teaching them tricks and for their friendliness that will keep them from barking at sudden noises or unknown people.

So we can see that according to their history, it is in their nature to make good traveling companions.

7. They are trained to be companion dogs

They can go out of their way to provide comfort when you need it the most. They stay around for a long time too so you can count on them to be present during the important moments of your family’s life.

8. They can be social media superstars

It may not come off as a surprise that these lovable dogs can become internet famous!

Meet Ozzie, social media superstar bichon frise. He has over 7,000 followers on his Facebook page. He gained his huge following thanks to cute pictures of him dancing, skateboarding, and even doing laundry! He has all sorts of props and costumes that make him shine really brightly on social media!

Despite their relatively small size, Bichons can be sturdy and will definitely be okay to walk on their own if you are ever outside with them. They love being independent and playful (though giving them quality time will not hurt either).

They are the perfect size for a family who lives in a small apartment and who will not require over protection.

10. They are categorized as a toy breed

All dogs are classified into groups by different organizations. Bichons may look like a fluffy teddy bear, perfect for the toy breed classification but they actually belong in the non-sporting group according to the American Kennel Club and the Canadian Kennel Club.

Interestingly enough, the non-sporting group is the category where dog breeds go when they don’t exactly fit in any other categories to be classified. They can be watchdogs or house dogs, can be quite small to quite large, and they may have different coat types and personalities, and they don’t necessarily have to look alike.

But, the UK Kennel Club, the Australian National Kennel Club, and the New Zealand Kennel Club categorize the bichon frise as a toy breed category which includes very small dogs.

Not only are bichons great for their family owners and kids, but they are also great with other pets!

Because of their sweet and loving nature, they can get along well with everybody around them. In fact, they even love being the center of attention. They like being showered with love and adoration by their human families.

12. They’ve been featured in multiple works of art

In the 16th century, many artists have featured the Bichon in their artworks. During that time, they were the favorites of the Spaniards and Infantas to the point that they even painted bichons for school. This is, no doubt, because of their cute appearance and calm personality which makes them a beautiful subject that can stay still.

One of the famous artists who painted bichons is Francisco De Goya.

13. They may suffer from separation anxiety

Bichons are clingy once they have formed a bond or attachment with their human families. It is best not to leave them for long periods of time to avoid having this problem. Bichons love to seek attention and to spend as much time with their owners as possible.

If you ever need to leave for long periods of time, having a dog sitter or someone else visit them regularly will be of great help. Otherwise, your bichon frise will be at risk of separation anxiety.

14. They can mostly be seen in a cute white coat.

Are there be brown or black bichons out there? Probably! But purebred bichons frises are mostly white with a hint of colors like apricot, buff, or cream.

The American Kennel Club (AKG) only recognizes these four colors of the bichon frise but they are mostly white. The other colors may take up to 10% of the body surface area. They have this cute, curly, and dense coat that would require a reasonable amount of grooming and can be turned into a variety of different haircut styles. It is recommended to brush their coats regularly to avoid fur matting. Taking care of your bichon’s coat doesn’t only keep them beautiful but also shields them from health problems like infections.

There is truly more to this dog than meets the eye!

Aside from their adorable appearance, they are also great companions, social media stars, muse for works of art, and they are even royalties’ favorite dogs! If you’re considering welcoming a bichon frise to your family, it helps to get to know their history to better appreciate how awesome they are!