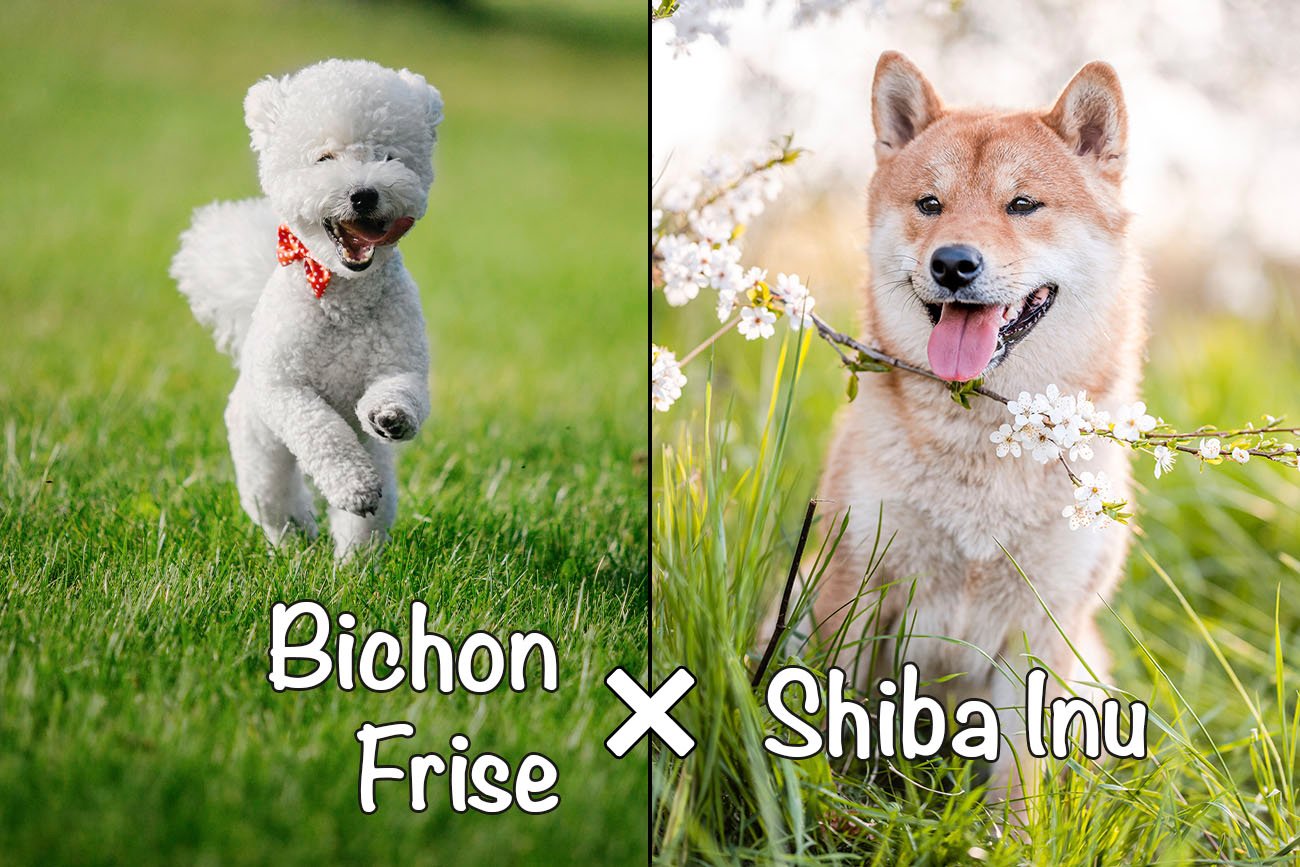 What do you get if you mix a curly lapdog with a hunting Japanese breed? An adorable fluffy pooch with a huge personality!

If you are considering a hybrid of these two popular breeds, you may want to check out the following sections to find out what you should expect in terms of appearance, maintenance, and temperament, among others.

The curly bichon frise has a long history. Its origins can be traced to the 13th or 14th century, although some voices claim that even Cleopatra, the Queen of the Nile, had a few of these small dogs, whose image was found in Egyptian sarcophagi.

A few centuries ago, the bichon frise was a breed favored by sailors in the Mediterranean region. In the 14th century, it became popular among the Italian nobility, but the breed went from riches to rags in the 1800s as they became popular among common people. Many bichons back then were living on the streets and performing tricks in the circus. In the 20th century, however, the breed turned to riches again, being favored by nobility and royal families.

It is just one of several types of bichon breeds.

Just like the bichon frise, Shiba Inu has a very long history. The breed originated in Japan with the purpose of hunting game. The name can be translated to “brushwood dog”, and it is the smallest Japanese hunting breed. It is also known as the Japanese turf dog or Japanese small-sized dog.

Shibas almost went extinct during WWII, but thankfully, three bloodlines were saved in 1947. The breed was introduced to the U.S. shortly after, in 1954.

The bichon frise and Shiba Inu mix is a designer breed, but there is not much information on its origin. Just like many other designer dogs, it is believed to have appeared in the last 20 years.

The bichon frise and Shiba Inu mix may be difficult to predict in terms of appearance, coat, size, and weight. The puffy hybrid may inherit both of its parents, or tend to look mostly like only one parental breed. Most likely, the pup will have orange-red tendencies like their Shiba Inu parent, but pups with white, apricot, or grey colors are not uncommon either.

This adorable fluff ball may inherit some of the Shiba Inu’s fox-like appearance. The coat texture and size may also differ, ranging from a curlier look to the dense, husky-like coat of a Shiba Inu. Both parents have a double coat, so the hybrid will most likely inherit this trait. One of the benefits of the double-coat is that it means that your pup will shed less, although it is definitely not considered a hypoallergenic pup like its bichon frise parent.

In terms of size, the hybrid will be bigger than a bichon frise, but most likely smaller than a purebred Shiba Inu. The bichon frise reaches up to 11.5 inches and 12-18 pounds, while Shiba Inu is about 14-15 inches and 17-23 pounds, depending on its gender.

The bichon frise and Shiba Inu hybrid may need a customized approach to maintenance. The main factor is which parent it will inherit from in terms of coat length and texture.

For instance, if the hybrid has a curly coat similar to the bichon frise, you will most likely need to establish a rigid maintenance routine, daily brushing, and even professional grooming once per month. On the other hand, if the pup takes after its Shiba Inu parent, infrequent brushing will be more than enough to keep the coat clean and untangled.

While bichon is a low-shedder, Shiba Inu does shed massively twice per year, and brushing helps remove the falling hair before it falls around your home. Most likely, the hybrid will shed less than a Shiba Inu, but more than the hypoallergic bichon frise.

In addition to this, you need to take care of this crossbreed just like any other dog. You need regular baths, nail trimming, and cleaning ears, teeth, and eyes, especially if your bichon frise mix has longer facial hair that could trap dirt and dust.

If you are a first-time owner, you may want to take your pup to a professional to avoid painful mistakes. For instance, dogs’ nails have blood vessels in them, so you could hurt the pup when trimming them if you don’t have any experience.

When going outdoors, keeping your dog on a leash is best to make sure that it doesn’t run away while chasing a small animal due to its high prey drive.

Thanks to the small size of the hybrid, a bichon frise and Shiba Inu mix is quite adaptable. As long as you fulfill the daily activity requirements, it could be just as happy in a large house as it would be in a small apartment.

The bichon frise is a loving, intelligent, and friendly breed, while Shiba Inu has a fiery and bold personality. The hybrid pup may inherit any traits from its parents, so the temperament of a bichon frise and Shiba Inu mix is hard to predict.

The Shiba Inu is often described by owners or lovers of this breed as a ninja warrior, with a strong will, increased alertness, and sharp intelligence. Both breeds can be quite stubborn, so the hybrid will most likely be quite tough to train.

It’s important to keep in mind that any dog’s temperament is heavily depending on upbringing, not only genetics. To make sure your pup has good canine manners, it’s important to start training as soon as possible. Positive reinforcement and professional training are required.

Most likely, the hybrid will inherit Shiba Inu’s possessiveness. This pup is a good family dog, but you may want to put all the toys and food away when other animals or kids are around, otherwise, it will be quite territorial and likely to quarrel over its belongings. As long as the hybrid is treated with love and respect, it can be an excellent family dog.

Thanks to the fiery temperament of the Shiba Inu, this hybrid may not be suitable if you have other dogs in your household, especially male ones. Other small pets may also get chased, but you could dampen its hunting skills by introducing the crossbreed to the family and other animals as soon as possible.

The good news is that hybrids are healthier than pure breeds. However, your pooch may still be susceptible to certain diseases that may affect its parents. The fluffy bichon frise is known to be prone to hip dysplasia, hypothyroidism, and eye, skin, or ear infections if these are not cleaned properly.

Just like with any dog, the bichon frise and Shiba Inu mix may suffer from dental disease if a proper daily brushing routine is not established. Smaller dogs are particularly sensitive, so it’s best to get your pup used to brushing as early as possible.

Obesity, dental disease, and other health issues specific to small breeds may be a problem. To minimize the risks, it’s important to keep an eye on the pup’s diet and physical activity requirements. Furthermore, a proper diet with high-quality dog food is a must to keep illness and diseases at bay.

A bichon frise lives up to 14-15 years, while a Shiba Inu up to 16 years. A hybrid is highly likely to live longer than its purebred parents. To make sure your pup has a long and happy life, you need to schedule regular vet appointments, so you can diagnose any potential health issues as early as possible.

To finish off, here are some interesting things to know about this mix:

Is Bichon Frise x Shiba Inu Mix the Right Breed for You?

Easy-going, friendly, but a bit territorial, the bichon frise and Shiba Inu mix is small but feisty. It is adaptable to any type of household and home size, is quite active, and may be quite difficult to house train, especially if you are a first-time owner.

Nonetheless, all the effort will surely pay off if you decide to welcome this well-spirited, intelligent, and highly protective hybrid into your home.