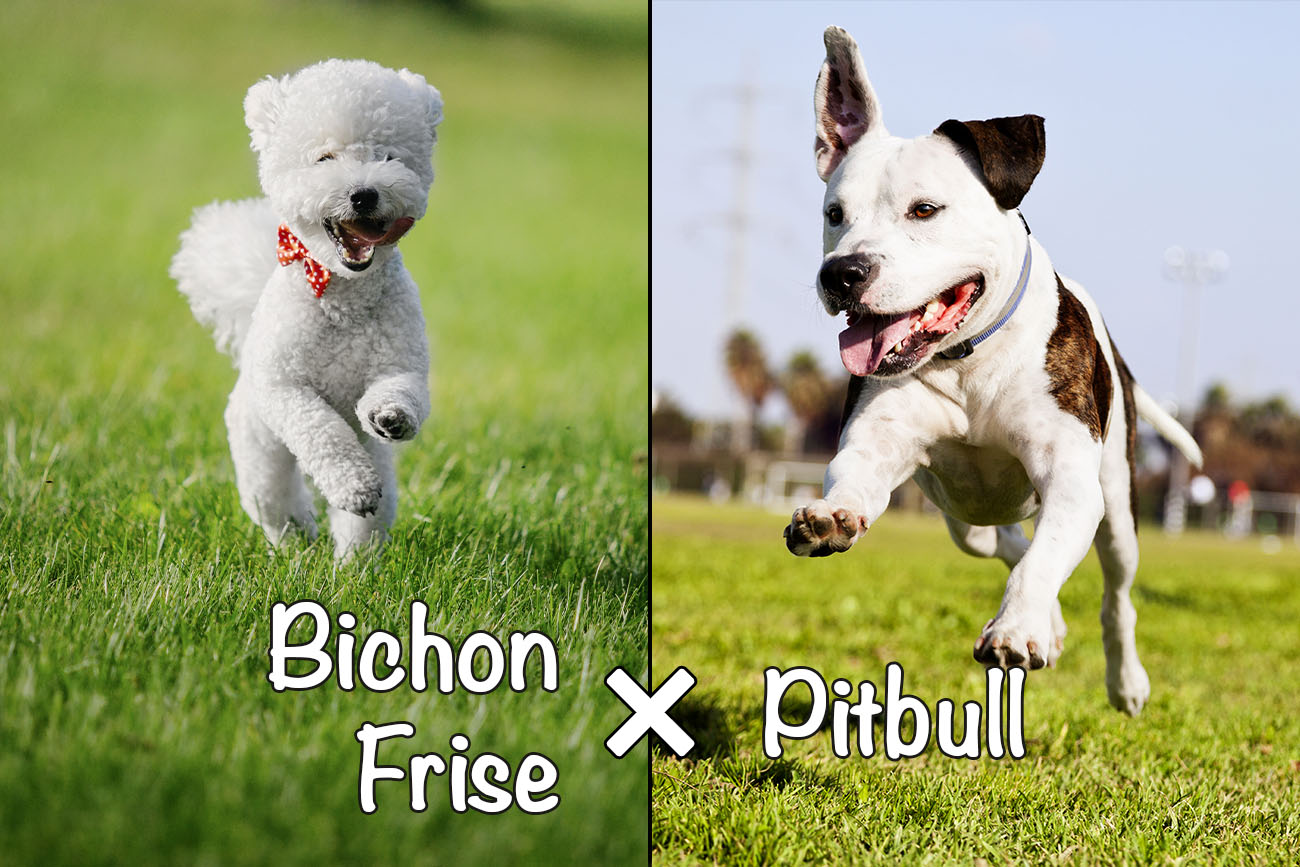 Are you looking for a low-maintenance, smart bichon hybrid? A cross between a bichon frise and Pitbull may be exactly what you’re looking for.

Below, we’ll discuss everything there is to know about this lively bichon frise hybrid including what to expect in terms of maintenance, training, and intelligence.

Let’s have a closer look at the history of this designer breed and its parents.

Despite common belief, the American Pitbull Terrier is not a breed per se, but rather a crossbreed as well. It comes from mixed parents – terriers and bulldogs, and they were introduced in the U.S. at the end of the 19th century. They originated in England and became the symbol of courage during World War I.

While the American Pitbull was known and raised as the symbol of strength and courage, the fluffy bichon frise was, initially, a wooly water dog. It was favored by sailors and records go back as far as the 14th century. Some people claim that it was brought from Tenerife. While the exact location is still under debate, most people believe that it originated in the Mediterranean region.

Once the bichon frise reached Europe, the nobility quickly fell in love with this pooch. It was pampered and treated as a lap dog. Some sources state that King Henry III was so in love with his bichon pooch that he carried it with him everywhere he went, placed in a basket that he would hang from his neck.

The bichon frise and Pitbull mix doesn’t have any clear origin or history. Most designer breeds started to become popular in the 1990s, so it’s a relatively new hybrid with little to no information on who was the original breeder and where it first appeared.

To find out what exactly you should expect from your pup, it’s best to find out more about its parents.

The bichon frise and pitbull mix is most likely a combination of features from both breeds. Unfortunately, as the distribution of genes is never the same or easy to predict, the way your hybrid pup will look is hard to determine in advance. One thing that you can do is ask to see its parents before adopting the pup, so you can get an idea of what it may look like at maturity. Certainly, there is no way to predict for sure what exactly your pup will look like.

Some hybrids may come with the puffy coat of the bichon frise and the Pitbull’s unique eyes, others may come with a short coat and the deep, intelligent eyes of a bichon.

It’s important to know that, while purebred bichons frises are always white, with a confident look and curved tails, Pitbulls are quite the opposite. Instead of the small, frail body, Pitbulls have an athletic, even muscular build.

Even among themselves, Pitbulls may vary. Some are wider and muscly; others are taller and leaner. One thing is for sure: all Pitbulls have a square-shaped head, big almond-shaped eyes, and a square nose. They also have short and smooth coats that do not require as much maintenance as a bichon’s curly, double coat.

In fact, a Pitbull requires minimum efforts in terms of bathing and brushing, but you should expect some challenges across the road if the hybrid’s coat looks more like its bichon parent.

Finally, Pitbulls come in nearly all colors, so each hybrid pup is likely to have a unique look. Merle color gene is the only one that’s missing in a pitbull – but anything else is possible, so having a look at the pup’s parents may help you get a better idea of the hybrid’s coat color and texture.

Your pup will need a customized grooming routine, based on its type of coat and length.

To keep your bichon frise and pitbull mix healthy, you will need to brush their hair as often as necessary. If the hair is curly and long, you may have to brush or comb it every day to keep tangles at bay. If, however, your hybrid looks more like its Pitbull parent, you don’t need to spend so much time taking care of its coat. If the coat is medium-length, you should brush your dog about three times per week.

You may want to schedule professional grooming appointments to keep the hair trimmed, clean their eyes, and trim their nails. Once per month should be sufficient as long as you ensure that they are brushed as often as necessary between the appointments.

In addition to this, you must bathe your bichon frise and pitbull mix as needed. You need to pay attention to what shampoo and conditioner you use, as the hybrid tends to have sensitive skin that gets dry very easily.

In terms of activity, the bichon frise is known for its low requirements. However, the Pitbull is nowhere near as chilled as a lap dog. In fact, a Pitbull doesn’t only require physical activity just to stay in shape, but also to stay mentally stimulated and healthy.

Both parents are very likely to adopt damaging behaviors when bored. To avoid your furniture and other belongings getting damaged, you should take your hybrid on daily walks, preferably twice per day. In general, a bichon frise requires about 30 minutes of activity per day, while a Pittie is more demanding – up to 45 minutes per day.

Space requirements may depend on how often you will take your pup out for a walk. If you can go out twice and spend plenty of time outdoors, a smaller apartment will suit the pup just fine. If you are not sure you can spend so much time walking your dog, or if the pup is to be adopted by a senior, it’s best to have a yard with plenty of space.

With a few toys, the pup can easily fulfill its activity requirements closer to home. However, as a word of caution, the Pittie side may love digging and is very good at jumping, so you may need to protect your plants and make sure the fence is tall enough.

The bichon frise and pitbull mix is likely to be a pup with a great temperament. Just like any other dog, early socialization and exposing it to a wide range of different social situations play a key role in adaptability and friendliness.

Thanks to both its parents, this hybrid makes for an excellent watchdog. It is friendly and loves to please its owners, it is good with kids, and is able to learn numerous tricks to entertain the whole family, including barking, spinning, rollover, and others.

These pups are smart and easy to train. The hybrid loves to follow you and your commands, but consistency is key. If you are a first-time owner, opting for professional training may be easier for you and your pup.

Both Pitties and bichons are known for their rather clingy behavior – they will not be happy if you leave them on their own at home for too long. Whether you are outside or snoozing on the sofa, they want to be around you all the time. Thus, if you cannot spend time with this hybrid, or there is no one at home when you leave, you may want to consider another breed or hybrid instead.

Training a bichon frise and pitbull mix puppy should consist of positive, consistent, and firm reinforcements. You need to set up the standards and rules (you are the alpha!), then use different situations, people, sounds, and pets to help them adapt with ease to any situation.

Pitties are excellent, loving dogs, but they require a clear sense of dominant order, while bichons are known for their rather stubborn behavior. Thus, if you are not ready for training, you will certainly benefit from professional training sessions.

If your puppy is not socialized from an early age, they may feel fearful around other pets and humans. This is normal for any other breed. It’s important to opt for consistent training as soon as possible to have a well-rounded, happy dog with good manners and lots of tricks up its sleeve.

Hybrids are always known for being healthier and living longer than purebred dogs that inherit genetic diseases. However, proper health care, diet, and exercise are crucial to make sure your pup lives a long and happy life.

A bichon and pitbull mix may suffer from diseases inherited from any of its parents. Some of the main ones you should look out for include skin problems, common with bichons, such as allergies and itchiness, heart problems, and ear infections.

An important aspect to consider is that the hybrid will most likely inherit its parents’ traits, so a hybrid with two healthy parents will enjoy better health than a hybrid whose parent suffers from genetic disorders. It’s always a good idea to ask to see a pup’s parents (if possible) before adoption.

In terms of lifespan, it depends on how well you care for your pup. In general, you should expect it to live until about 15 years old. However, with proper due diligence, regular visits to the vet, and a healthy lifestyle, your hybrid may live longer than that.

For this, you will have to pay extra attention to exercise needs and diet. While the pup may love its treats, you need to ensure it remains within a healthy weight range. The hybrid may require more high-quality proteins in its diet than a regular bichon because of the pitbull side.

Overall, to find out exactly what your pup needs and what food brands deliver the best value, you may want to check with your vet. They can provide you with a customized plan factoring in your pup’s age, weight, and activity level, among others.

Is Bichon Frise x Pitbull Mix the Right Breed for You?

The bichon frise and pitbull mix is definitely a lively, cuddly, and intelligent pup. Based on your needs, preferences, and time available, this may be the right breed for you.

With proper training and care, it can adapt to just about any type of household, whether you are a senior living alone or you have a large family with kids. It is smart, adaptable, and an excellent watchdog. At the same time, it doesn’t require as much maintenance as a bichon or as much activity as a Pitbull, so it’s the best of both worlds.

The most important aspect you should keep in mind is that this pup, just like any other, requires lots of time and care. If you spend a long time away from home, this breed may not suit you. While it’s a good choice for first-time owners, training may be difficult, so you can always contact professionals to help you in your journey as a new pet owner.